Snow gone so it’s Spurs at the Turf 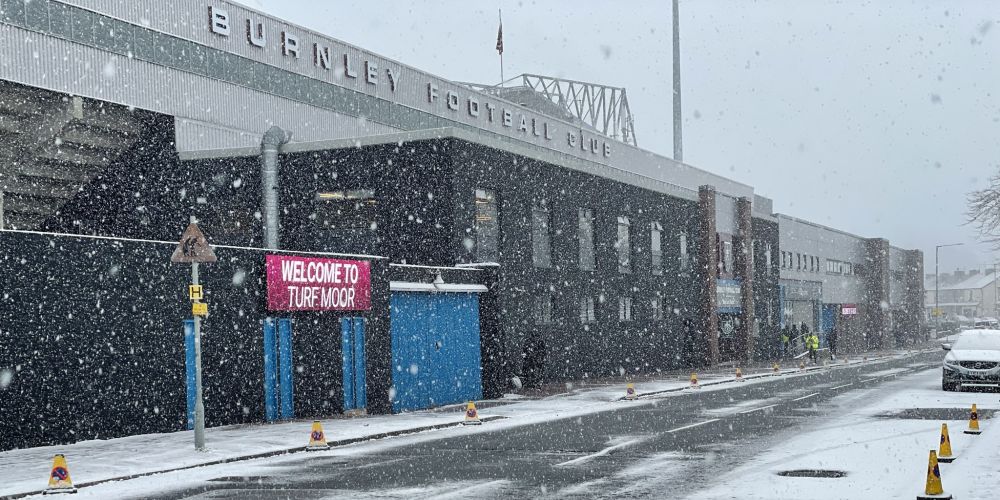 Almost three months ago, I was outside the Turf on Clarets for Foodbanks duty ahead of our home game against Tottenham Hotspur, totally unaware that a battle was going on to clear the pitch of snow just a few yards away.

That battle was lost with referee Peter Bankes calling the game off under an hour before kick off and so we are back tonight for the second attempt with no snow forecast but rain as we seem to get every game now.

Saturday afternoon gave us a lift ahead of this game with the 3-0 win at Brighton but soon afterwards Spurs got their lift also with that dramatic victory over Manchester City at the Etihad.

We are still very much down there in the relegation positions, and nothing can happen tonight to change that with us now trailing seventeenth place Newcastle by five points. But recent performances have given everyone some hope.

It started with that 0-0 draw at Arsenal when we defended so well and the performances in the second half against Manchester United and the whole game against Liverpool were deserving of more than the one point we did get. Then came the win at Brighton and although we have some very difficult games to come, those performances have put smiles back on faces in the stands.

So Spurs tonight. Usually this is where I go into raptures about some of the brilliant games I’ve seen between these two sides over the years, especially back in the 1960s when we were the best two teams in the country. Having witnessed the League Cup game between us earlier this season, I’ll refrain. That was not a good advert for the game.

Embed from Getty Images
How much of a lift a second win of the season has given us we will have to wait and see but midfielder Josh Brownhill, who scored his first ever Premier League goal in that win, said: “It’s a massive confidence boost and it’s proved that if we keep playing the way we do, because we’ve been playing well recently, the results will follow, and we will pick up points.

“In regards to moving forward, it’s not about how many points we want to reach because it can change every year, we know it’s in our hands and if we win our games, I’m sure we’ll be fine.”

Sean Dyche delivered the good news yesterday that he expects both Maxwel Cornet and Wout Weghorst to be fit. Both came off during the game, Cornet early in the second half and Weghorst close to the end, but both were impact injuries and they’ve been given the all clear.

Charlie Taylor is making progress and could be available for weekend, while Matěj Vydra is not too far behind him. However, having recovered from an appendix operation, Jόhann Berg Guðmundsson has suffered a calf injury with the latest update confirming he would be having a scan.

Any changes to the team tonight will be dependent on James Tarkowski and Ashley Westwood. Both missed out at Brighton with covid and Sean Dyche confirmed we were awaiting test results to determine whether they would be available tonight.

Spurs arrive in eighth place in the Premier League. They are seven points behind Manchester United who hold that crucial fourth place currently for the final Champions League spot. They do have games in hand on most of the teams above them and a win tonight would bring them level on points with both West Ham and Arsenal while taking them above Wolves.

Prior to last Saturday, they’d been beaten in their three last Premier League games at Chelsea and then at home against Southampton and Wolves but they won at Manchester City with a dramatic winner from Harry Kane in the fifth minute of stoppage time having conceded a goal from the penalty spot three minutes earlier.

There were doubts tonight about the fitness of Harry Kane, who scored in that win including the winner, but Antonio Conte has dismissed those concerns. He said: “Even if he has one leg, he has to play. He knows the importance he has to our team.”

Embed from Getty Images
He will be without Japhet Tanganga and Oliver Skipp (pictured above) but there is good news for them with Sergio Reguilόn close to full fitness.

The last time we beat Spurs at home was on this date three years ago, the 23rd February 2019. Despite a hotly disputed goal from Harry Kane when fourth official Craig Pawson opted to throw the ball back for them quickly. Chris Wood had given us the lead with Ashley Barnes winning it for us seven minutes from time.

Coincidentally, we’d won the previous game and that was at Brighton.