Following the departure of Ernest Mangnall at the end of the 1902/03 season, the club directors decided on a change of policy and agreed to appoint a dedicated full time team manager for the first ever time.

The first three managers, Arthur Sutcliffe, Harry Bradshaw and Mangnall, had all combined the role with that of club secretary, but now the secretarial role was handed to director Mr W. R. Thornton whilst appointed as manager was Spence Whittaker (known as Spen) who had come to prominence within local football in Accrington. 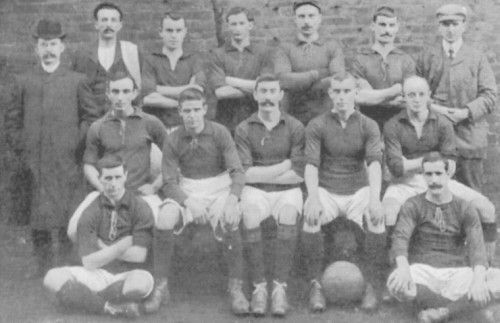 He took over a Burnley side that had finished at the bottom of the Football League and had been forced into applying for re-election. He immediately set about improving the club’s fortunes, making a number of signings for the new season, the most notable of them being Hugh Moffatt who signed from Congleton. Moffatt went on to play over 200 league games for Burnley.

The performances did improve but never enough to mount any sort of promotion challenge. His first season in charge saw a fifth place finish but this was to be the best during Whittaker’s time as manager and probably more significant than the results were some of his signings.

Former England international Alec Leake arrived from Aston Villa, and despite being well into his thirties he played a major part in helping Whittaker build a team to try and get the club back into the First Division. Richard Lindley and Willie Watson were both signed, from Oswaldtwistle Rovers and Southport Central respectively, and both were to play major parts for Burnley over the next decade and more. However, his most memorable signing would surely be that of a young apprentice blacksmith from Cliviger, a goalkeeper by the name of Jerry Dawson. Within months the youngster was first team goalkeeper and went on to play no fewer than 569 first team games for Burnley, still the appearance record today.

It was very much an average time for Burnley though who really became a very average Second Division club, and it was another transfer dealing that brought and end to Spen’s reign as Burnley manager when he was tragically killed in the rush to register a new player. That was in April 1910 and on the Friday he went to London to register the signing of new player Harry Swift from Accrington.

When the train he was travelling on reached Crewe there were reports that someone had fallen from the train. A body was discovered and it was that of Spen Whittaker. The club fell into mourning and later held a benefit match against Manchester United for his wife and family.