Searching for a new manager was beginning to become something of an annual event again, and this time it was following the departure of Chris Waddle. This was our third managerial search in not much over two years as we’d seen Jimmy Mullen, Adrian Heath and now Waddle vacate the manager’s seat. 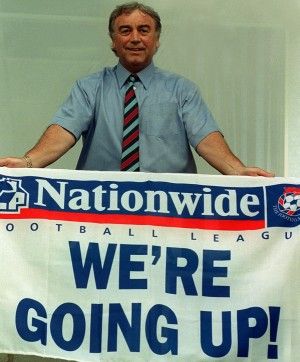 Within 24 hours of Waddle leaving, the club spelled it out that on this occasion they would be looking for someone with experience and the names of Sam Allardyce, Brian Flynn and Bury’s Stan Ternent were the first to be mentioned, whilst former player and coach Dave Merrington expressed some real interest in the job to work alongside Colin Lee. One day later it was revealed that the directors wanted to meet with Ternent, and it also appeared that they had also placed Neil Warnock in the frame after he had parted company with Oldham. But just over two weeks after the job became vacant an offer was made to former Claret Ternent and on Tuesday 2nd June he strode into Turf Moor along with assistant Sam Ellis.

“Will we be playing the same sort of football you played at Bury?” asked one fan, clearly not too impressed with the news, in an impromptu question and answer session after the press conference. “What’s that?” said the new manager, somewhat sharply, before adding: “What you will get from Burnley is an organisation, an endeavour, a commitment and a will to win as well as no fear of losing.” When pressed by BBC reporter Peter Stephenson as to what his ambitions were he merely said, “To win the first game.” “And then?” Stephenson asked, to which the new man predictably answered: “To win the second game.”

Chairman Frank Teasdale confirmed that there was money available but Ternent quickly realised that his squad wasn’t good enough, and that there was little he could do about it because of the lack of finances as the club waited for the big money to come in through Peter Shackleton. He moved quickly to tie down some of the younger players on longer contracts – Chris Brass, Glen Little, Paul Smith and Paul Weller – although he lost others who hadn’t been offered new deals on time. Then after three games he all but sacked four players on live radio.

Things didn’t get better. We were struggling down near the bottom of the league as the club kept looking for Shackleton and his millions. Thankfully help was round the corner in the shape of Barry Kilby and he and Stan were to have a fruitful partnership. Barry’s finance and Stan’s know how enabled us to strengthen the squad. In came, over a number of weeks, Paul Crichton, Ally Pickering, Steve Davis, Graham Branch, Micky Mellon, Lenny Johnrose, Paul Cook and Tom Cowan and we were finally able to get ourselves out of a relegation battle with an unbeaten run of eleven games at the end of that 1998/99 season. It started a three year period of success, the likes of which many Burnley fans had never seen.

Promotion came in 2000 with a little sprinkling of startdust with the signing of Ian Wright, and then in the following two years we came within one place of the play-offs for the Premiership, although in the second season only a collapse to near relegation form in the second half of the season prevented us from going straight up.

Things were to turn sour through no fault of Ternent’s. Basically the money ran out with the collapse of the ITV Digital television contract and the squad was reduced in numbers. League form was never quite the same again although we did have some enjoyable cup runs with wins against Premiership clubs Spurs and Fulham. The 2003/04 season proved to be his last at the helm, and ultimately his most difficult. There were games when we didn’t even fill the subs bench due to a lack of players and it was a battle against relegation for much of the season. Even Stan admitted that surviving would be the eighth wonder of the world. We did survive, not by much but we did, and just three days after confirming our place in the newly named Championship for the 2004/05 season the club announced that they wouldn’t be renewing his contract.

Relegation would have been a disaster, and there’s no doubt it would have been so unfair on Stan Ternent who in his six years in charge had transformed the club. When he walked in no one could have dared hope that within two years we would be promoted and that four years on from that we would still be playing in the second tier of English football. It was hardly a quiet six years during the Ternent era. He gave people a blasting when he felt it was required, and I was on the end of those attacks both publicly and privately more than once, yet I have to say that getting the opportunity to talk to him when he was calmer was a privilege and something I will always remember as I will being invited to his home where he and Kath made me so welcome.

We all have our Ternent memories. It might have been one of the days when he was having a go at a referee, or an opposing manager (with one in particular in mind who has been mentioned previously in this article, someone affectionately known as Colin to so many). For me there are two memories I’ll always remember more than any other. There was the day he was like the cat that had got the cream with the signing of Wright and then soon after that, the day at Scunthorpe when he took us up, just as he had promised.

History will remember Stan Ternent as a very successful Burnley manager, and so it should. We’d spent all but two of the eighteen years before he arrived in the bottom two divisions. He left us having spent no fewer than four successive years in what is now the Championship. There’s no doubt that Burnley Football Club is a better club for having had Stan Ternent around during that time. It really was eventful, and didn’t he provided us with some classic quotes that were labelled Stanglish? There was the man behind prison bars and the blind man on the galloping horse. He had referees not fit to ref on Hackney Marshes and he had us all watching live games on the wonderful magic lantern. In 2000 he cancelled Christmas after a Boxing Day defeat at Barnsley, claiming the players had enjoyed too much plum duff.

We all have our favourites but I think it is only fitting that this look back at his time as Burnley manager should end with his words at Glanford Park in 2000 when he looked out at the crowd on the pitch celebrating. “It means so much to them,” he said, “And it means a lot to me as well.”