After six years of Stan Ternent it was time for a change of manager and the club spent some weeks deliberating before handing the job to former Cheltenham Town and Stoke City manager Steve Cotterill. He had been a player with Wimbledon, Brighton and Bournemouth but his career had been cut short through injury and he took his first steps in management with Sligo in the Republic of Ireland. 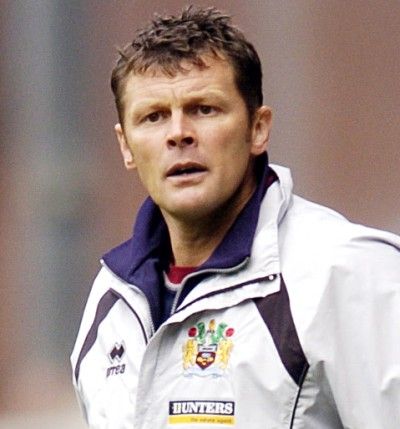 He returned home to Cheltenham and was soon named manager. In just over five years there he took them to three promotions from the Southern League to the current League One. To add to that there was an FA Trophy win at Wembley and he bowed out with a play off win at the Millennium Stadium and moved to Stoke.

That led to a really difficult time with the interfering Icelandic owners and so he quickly took the opportunity to move on, joining Howard Wilkinson at Sunderland, a decision that won him the name Quitterall with the Stoke fans. The plan was for Cotterill to take on the manager’s role once Wilkinson had stabilised things but they couldn’t turn things round at Sunderland and the pair were sacked within months after which he spent some time coaching at Leicester before accepting the Burnley job, earning himself a three year contract.

He was Burnley manager for just over three seasons and those three full seasons all, to some extent, followed a similar pattern. Whatever the start to the season, and in 2005/06 we were bottom for a short time early in the season, we always had a good autumn and were right up there in the approach to Christmas. We always looked in with a chance of reaching the play offs by the time the turkey was on the table.

In his first season in particular it was remarkable given the size of the squad, but it was a reduction in the squad that always led to a poor run of form. In 2004/05 season we sold both Robbie Blake and Richard Chaplow in January. Robbie’s was the greater loss, the whole playing system revolved around him and he was our leading goalscorer by some distance. Eventually Cotterill was able to bring in Ade Akinbiyi as a replacement but by then we were already having to settle for a mid-table place with the hope of better to come in the following season.

That season though started off poorly with just one win in the first ten games, but then came the recovery. By Christmas we were in the top six but again January proved crucial. Amidst rumours that Cotterill might go to Leicester he one again had to sell our leading goalscorer. Akinbiyi headed for Sheffield United. Again we suffered in form but the board backed the manager during a run of six successive defeats and rewarded him with a new deal until the end of the 2009/10 season. Before the end of the season the next striker replacement came in; this time it was Andy Gray from Sunderland, initially on loan then permanently in the summer of 2006.

Cotterill’s third, and ultimately final, season got off to a great start. We were playing our best football in a long time and headed the league for a while. There were some outstanding performances with the 4-1 win at Norwich probably the best of the lot. All was going well and Gray was scoring the goals. Then disaster struck just after the loan window had closed when he broke three metatarsals.

This time the drop in form was dramatic. We didn’t win any of the remaining six games in 2006 and even though Cotterill was given money to spend in January the results just got worse and worse. I don’t think anyone would have been surprised had he lost his job but again the club showed faith in him despite a run of eighteen consecutive league games without a win, the second worst run in the club’s history. With us looking close to a relegation battle we finally found that elusive win, won five out of six, and by the end of the season we were more than comfortable. That allowed him to rebuild the squad in the summer. Akinbiyi had returned in January, Blake followed during the close season, and hopes were high.

For the first fourteen games of the season we played more than well enough away from home but at home struggled at times and won only twice against West Brom and Norwich. The home game against Hull in November 2007 was as bad as anything during his time as manager but even so it still came as a big shock when two days later the club announced they were parting company with him by mutual consent. Given what he started with there is no doubt that he definitely improved the club and he left the new manager with a lot stronger squad than the one he had inherited in the summer of 2004. His first group of signings were goalkeeper Danny Coyne, defenders Michael Duff, Frank Sinclair and John McGreal and midfielder Micah Hyde. He left a squad that included such as Clarke Carlisle, Steven Caldwell, his final Burnley signing Graham Alexander, Wade Elliott, Blake, Gray and young Chris McCann who had been brought through the youth system.

He will though be judged by many on results alone. We never did make a sustained challenge for the play offs, but he kept us in the second tier of English football for three years and that, looking back, was some achievement in, at times, difficult financial circumstances.

After leaving Burnley he was out of work for some time before accepting the Notts County job in March 2010. A run of 14 wins and just one defeat in 18 games followed that took them to the League Two title but Cotterill opted for a move to Portsmouth in the summer of 2010 following their relegation from the Premier League. He’s since managed at Nottingham Forest, Bristol City and Birmingham but has not been involved since losing his job at Birmingham in March 2018.