Two days after Steve Cotterill and Burnley Football Club parted company we had a Championship fixture to play at Leicester which proved to be a game between two caretaker managers. Leicester were to be relegated that season. They’d already parted company with Martin Allen while his replacement Gary Megson had quickly jumped ship to join Bolton. Ian Holloway was to the man who would ultimately take the Foxes into League One but Frank Burrows was in charge for this game alongside Gerry Taggart while Burnley asked Steve Davis to lead the Clarets for what proved to be one game only. 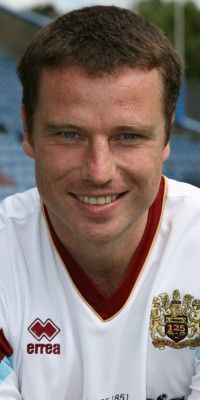 Davis had enjoyed three spells as a Burnley player, making just short of 400 league and cup appearances, before leaving for the final time in 2003. He’d returned, initially as a scout, under Cotterill before joining the coaching staff. He’d been appointed assistant manager just a few weeks earlier following the departure of Dave Kevan and now stepped up to take on the manager’s role with David Unsworth, who had been sent off on that fateful night against Hull on the previous Tuesday, supporting him in the technical area.

In his one game in charge the players delivered for him with Andy Gray scoring the only goal of the game to give us our fourth 1-0 win at the Walkers Stadium in five visits. Davis had now been involved in those wins as a player, captain, coach and manager.

“It was a great start and I am absolutely delighted,” he said. “Things could not have gone any better and the lads have done the club proud today. I’ve been here as a player and lately as a member of staff, but I think today’s game has to be top of the list as far as I am concerned. It was a proud moment to manage the club that I love. It is where I live and it’s my home. I don’t need to say any more.”

Not thinking of himself, he added: “It has been a tough week with the gaffer going and the result was for him today. He wished everyone all the best before the game and this result is for him because he will be missed. He has been excellent for the club and I am sure he will be a proud man as well.”

The reaction from the Burnley fans, some still shaken by the shock departure of Cotterill, at the end said it all. They gave the players an incredible reception when they came over before they were joined by manager and his staff in a post-match huddle. “What happened at the end epitomised the club and what the lads feel about it,” Davis said. “I was going to suggest it with five minutes to go but I didn’t want to tempt fate. When Phil Hughes and David Unsworth said the same it was a popular decision.

“”It has been a tough week and we just wanted to show them there is still spirit at the club. We just wanted to thank them for their support and I am sure all the fans are very proud of the team. I am sure it will not always be like that, but all I could do today was get the lads ready and try to give them a bit of confidence and belief and they had that, so it has been immensely enjoyable.”

We wouldn’t play for another two weeks because of an international break and by that time a new manager had been appointed. This proved to be his one and only game as manager. Davis remained at Burnley on the coaching staff until January 2010 when he moved to Bolton, a decision he said recently he now regretted. He has more recently moved into scouting with first Fleetwood and currently Everton.

There is absolutely no doubt that had he been given the job then on a full time basis, it would have been a decision very favourable to the Burnley fans. Davis had been a hugely popular player with the Clarets and had played in three promotion teams, captaining the team that moved into the second tier in 2000. It wasn’t to be so he stands as the only Burnley manager with a 100% record.