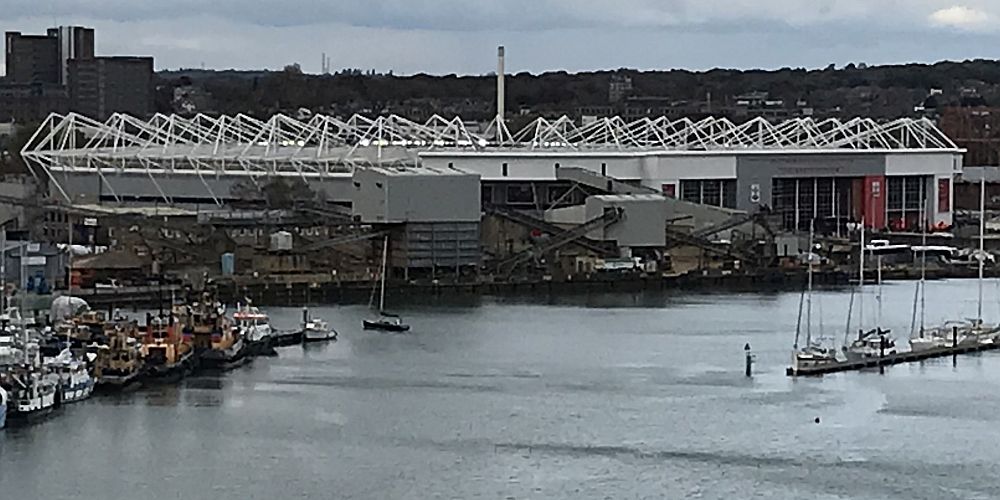 Whenever we look back at this 2-1 win at Southampton, I’m sure we will always remember the name of one player, that of Matěj Vydra, who finally was able to make a name for himself at Burnley for all the right reasons.

He might not have been the man of the match, that honour for me was reserved for either of the two central defenders, but he came on as a substitute for the injured Chris Wood and went on to score a stunning winning goal on the hour to take our points total from the last four games to an outstanding ten while also lifting us, for now, back into the top half of the Premier League.

Vydra was mobbed by his team mates on and off the pitch as he celebrated the goal. He was granted his own curtain call at the final whistle and apparently received a wonderful ovation from those team mates in the dressing room when he returned after carrying out the obligatory media duties.

What a day for him when it was all supposed to be about Dennis and the latest storm to be hitting our shores, a day that became another superb one for our team and left the Burnley fans inside St. Mary’s celebrating well past the final whistle as we started, surely, to envisage a fifth successive season at English football’s top table.

The league and television companies decreed that one of our longest trips of the season would bring with it a 12:30 p.m. kick off so that meant an adjusted timetable for us with our main stop shifted until the return journey. It still meant a 6 a.m. departure and I have to report that all was calm when the front door was locked behind me. No rain, no wind and, for February at that time in a morning, very high temperatures.

Embed from Getty Images
That’s how it was all the way into Staffordshire when we had our first stop. A quick call into the services there but when we came out it was pouring with rain and it was like that for the next part of the journey although by the time we’d reached Southampton it was fine again with no real sign of what was supposed to be on the way weather wise. That allowed us to stroll up to the stadium and eventually take our seats.

We’d learned that there was one change to the team that had picked up the point against Arsenal and again it was at right back. Phil Bardsley lost his place to injury ahead of the previous away game against Manchester United; now it was an injury to Matt Lowton which allowed him to return. There was also a welcome to the match day squad for latest signing Josh Brownhill who was named as one of the seven substitutes.

I suppose you always hope that your team will make a good start to the game and on this occasion it really couldn’t have been any better. We won an early corner on the left wing which Ashley Westwood went to take. I’d say our fans had the best view of what happened next as the in-swinging corner came in, was pushed out by home goalkeeper Alex McCarthy but then turned in by captain Ben Mee to give us a second minute lead.

Mee, who hasn’t scored a goal now since January 2017, went into the corner in front of the Burnley fans to celebrate, pointing to himself to confirm that he was the goalscorer, but there was a belief from some of us that the corner had gone straight in from Westwood. Westwood himself knew as a he celebrated on his own by the corner flag, and Jay Rodriguez knew, he was the player who told the group celebrating with Mee that they should be elsewhere.

It was Westwood’s goal. Danny Ings, playing against his former club, was stationed at the near post but inexplicably adjusted his body to let it go past. McCarthy had decided to stand too far behind his line so when he did clear it, the ball had already gone way over the line. Sorry, Ben, your goal at Manchester City in the first game of 2017 remains your most recent goal. I’m not sure he’d be too bothered though, we were in front.

Embed from Getty Images
Southampton came back at us and had a few situations towards our goal. Most of the play was at that end although, until the 18th minute, they hadn’t caused us too many anxious moments. Then, they equalised, and what a response from Ings who finished superbly from just outside the box with a right foot shot.

Having worked the ball forward, Mee was so unfortunate to see the ball come off him to Ings but it was then all about the former Claret who continued his recent good form with a terrific effort and that started a difficult few minutes for us that saw us lose Chris Wood to an injury and then Jack Stephens come close to giving Southampton the lead with a header that came back off the bar.

Wood went down in the aftermath of Southampton’s equaliser. It was difficult to see what had happened but it turned out to be a hamstring injury. When it was clear he would have to come off, my thought was that Jeff Hendrick would be pushed forward with Brownhill potentially coming on or, more likely, Aaron Lennon. But it was Vydra as we continued with the 4-4-2.

They didn’t offer too much threat after the effort onto the bar in terms of goal opportunities but, in worsening conditions, Southampton had been the better team in the first half so to come in at 1-1 was more to our satisfaction than theirs.

As the rain poured down and the wind swirled round, they started the better of the two teams initially in the second half but then we got to grips with things and for a long period we were very much in the ascendancy.

Embed from Getty Images
It was right on the hour that the winner came and so much credit must go to Hendrick for the goal although, rightly so, all the glory goes the way of Vydra. Hendrick, initially, did really well to win the ball back for us. He played the ball back to James Tarkowski and then received it back before playing a wonderful ball forward for our Czech striker. Then it was all Vydra.

He took the ball superbly on his chest before turning. There was no opening for a shot as Kyle Walker-Peters came across so he nicked it past him with his left foot and then used the same foot to score an absolutely stunning winner. He ran to the touchline and did the knee slide. He found himself jumped on by Lennon who was warming up alongside Brownhill who joined in and then came the cavalry with virtually all of the players on the pitch getting involved.

We had opportunities to increase the lead and the closest we came when was via an outstanding effort from Jay Rod that McCarthy palmed away.

Southampton were always going to give it a go late in the game and they did. They went up for a penalty for hand ball against Mee following a Stephens cross. It was waved away by referee Simon Hooper and his assistant with Michael Oliver confirming via VAR that it was not hand ball, and rightly so.

There was to be one last chance for the home side just before the board went up to indicated four extra minutes. Their captain Pierre-Emile Højbjerg shot but it was blocked by Nick Pope before, appropriately, Vydra hooked the ball away.

Embed from Getty Images
That was it, we coasted through the four minutes of added time and the points were ours, successive away wins for the first time since we won three on the bounce at West Ham, West Brom and Watford two seasons ago.

There was to be one more big, and unforgettable moment. A drenched Sean Dyche acknowledged the travelling supporters before disappearing up the tunnel, presumably to search for a towel or two and some dry clothes.

That’s usually the signal for the team to come over but, brilliantly, they allowed Vydra to step forward on his own and take his own curtain call before they all joined him. What a touch from our players that was, and what that says about our dressing room, more so given the big news of the week that had centred around Ben Gibson.

I have to say we too got wet on the walk back to the car which was no more than a few minutes away from the exit but once on our way it was destination Banbury and yet again we had found ourselves an outstanding pub and eatery not too far from the cross.

And then the final leg of the journey home, safely with three more points after another superb away day. Three more points, and that’s 34. That’s more than we got in either of our first two Premier League seasons and another seven would mean our second best ever. The four defeats on the bounce aren’t forgotten, but for most of us there is this understanding that those sort of runs will happen. The beauty of it is that we can then get runs like the one we’ve had for the last four games.

Embed from Getty Images
Storm Dennis had threatened much ahead of the trip yesterday. It wasn’t good, I’ve certainly travelled to and watched football in better conditions, but I don’t think things ever got close to being as severe as they had threatened.

Instead we had our own Storm Vydra and our hero for the day.