Such sad news as Cool John Angus passes away

John Angus has sadly passed away at the age of 82. The news took my mind back to October 1960 when my dad first took me to a game on the Turf. John was in the team that day in the number 2 shirt, one that he wore with such distinction on so many occasions for our club. Only two of those who played that day, Alex Elder and Jimmy Robson, are now still with us.

Spotted by our top North East scout Charlie Ferguson her arrived at Burnley in 1954 but soon returned home because of homesickness. Thankfully someone was persuasive and he was back in Burnley during the following year and debuted in the first team in a home game early in the 1956/57 season. 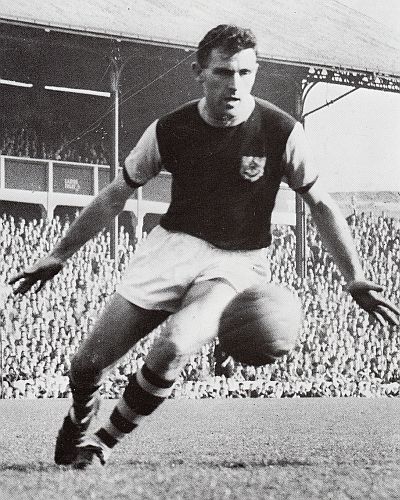 He had established himself in the first team prior to the 1959/60 season when he missed just the defeat at Wolves as we went on to lift the title. With the team’s success he played in the European Cup and the FA Cup Final for us and a year before that final against Spurs he made his one and only England appearance alongside Brian Miller against Austria in Vienna where he played on the opposite flank at left-back.

Not a player to be messed with on the pitch, he just got on with his job quietly although Martin Dobson once told me of an occasion against Southampton when, without any warning, he wandered onto the other side of the pitch, took out Terry Paine before walking back across again without saying a word. There had been previous between the two.

He was a hard player undoubtedly, but a player of real quality who really should have had far more England caps than the one he did win. Apart from the 1968/69 season, when injury struck, he was usually the first choice at right-back until August 1971 when, having played the opening two games of the season, he was ruled out with an injury from which he never recovered.

His Burnley career was over after 439 league appearances and 521 in total. The league total is, alongside McIlroy, the most by any player while no outfield player in the history of the club can match the 521 which included four European Cup games and six in the Fairs Cup.

He wasn’t the modern type of full back and it was always said that he’d have got a nose bleed if he went over the half way line. I think all his four goals for us were scored when he’d picked up injuries and was forced up the pitch in the days of no or limited substitutes. But he must have been a dream to play in front of, with such as John Connelly and Willie Morgan benefiting so much from his presence.

When his playing career was over, he and his family returned to their native North East. He rarely visited Burnley but on the occasions he did was received, rightly, with great affection.

John Angus was one of my favourite Burnley players in the 1960s. He was a simply outstanding player for us and was a one club man as were his former title winning team mates Jimmy Adamson, Tommy Cummings and Brian Miller.

Today really is a sad day for us all with an interest in Burnley Football Club. We’ve lost one of our most special players from the golden era around sixty years ago and we will rightly mourn him.

I’m sure everyone with that interest in our club will join me in sending condolences to his wife Florence, his daughters Jill, Judith and Karen, their families and all John’s friends.