It was a sixth goalless game at the start of the 1997/98 season for the Clarets when we went down to a 1-0 defeat at second place Chesterfield.

Burnley, as was the case everywhere in the country, was mourning the death of Diana, Princess of Wales, but it seemed some people couldn’t even show respect during what was a difficult time for a lot of people. 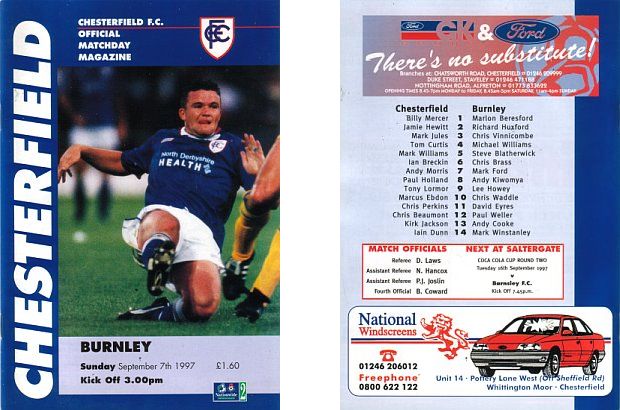 The flag was flown at half mast at St. Cuthbert’s CofE church in Towneley Street, that was until it was stolen. Vicar, the Rev. Hector Lee said: “I am absolutely disgusted and can’t believe this has happened. The whole nation is grieving for Diana. I would have thought they would have respected that.”

Church warden Mr Alan Hunter was equally disgusted and he said: “We only put the flag up there on special occasions and, most people appreciate it. It just seemed the appropriate thing to do when Diana died.”

That wasn’t it. Mrs Marion Howlett put together a lovely bouquet of flowers and placed them under the arch in the peace garden below St. James’s Spire. That was stolen as were two teddy bears left by children outside the town hall.

There was big news for one Burnley man. Broadcasting brain Peter Salmon, the man behind the TV programme Crimewatch UK, had been appointed the new controller of BBC1. Salmon said: “I shall be sorry to leave Granada which is Britain’s biggest and best television producer. It’ll mean swapping the Rovers Return for the Queen Vic as my local.”

The former St. Theodore’s schoolboy was replacing Michael Jackson at the BBC but I can confirm that was neither the Michael Jackson who had four brothers or the one who was caretaker manager at Burnley for eight games at the end of the 2021/22 season.

If you fancied taking on a copper then PC Roy Curwen was probably not your best choice. He’d been in competition over the previous weekend when he became the national police fullbore rifle champion. Recently transferred from Colne to Burnley he revealed he would be representing the British Police as captain at a competition in Germany.

On the subject of the police, they were launching a campaign to reduce the number of non-emergency 999 calls. It seemed people were calling the number when the situations might not have been considered an emergency. In the previous week, they had received on 999 calls:

The funeral of Emma Nelson and her grandchildren Michael Wright and Rebecca Marshall brought the town out in numbers as local people lined the streets in tears as the three hearses went past followed by twenty-five funeral cars. The problem with the gas boiler had led to the deaths with police, who joined the mourners, confirming this was just a tragedy.

Lambert Howarth, having announced they had no option but to close their Burnley base with the loss of up to two hundred jobs, then, soon afterwards announced a 117% increase in pre-tax profits. It didn’t go down well.

There were two particularly sad deaths in Burnley during the week. Mr Ian Dyster’s wife had left him in July along with his two stepchildren. Mr Dyster, aged 37, had struggled to come to terms with it and when his dad called round, he found Ian hanging in his garage.

In this week, Mr Wally Ashley also passed away. He’d suffered for some time with illness but there was a generation of local cricketers, like myself, who had played in countless games he’d umpired.

Over at the Turf, they were advertising vacancies to work at the soon to be opened Sports and Leisure Complex but for the players and fans, it was a Sunday trip to Chesterfield. The entire programme was moved from the Saturday because of Diana’s funeral with the games spread over the days from Friday to Tuesday with one fixture put back to October.

Manager Chris Waddle confirmed ahead of the game that we had Australian Mark Robertson on trial. He’d spent ten days in Glasgow with Rangers but turned down a chance to play for their reserves against Celtic to enable him to come to Burnley and play in our reserve team.

Ahead of the game at Saltergate, Waddle said: “Chesterfield are a very experienced and strong side. They don’t lose many games at home or away, but they don’t seem to score the amount of goals needed to win promotion.

“Everyone knows all about them after their cup run last season, and the manager has brought in some new players to replace the ones they sold. They have started well and it will be a difficult task for us. It is a tight ground and Burnley’s record there isn’t the best. If we can come away with three points, we will be delighted, but the main thing is not to get beat.”

Waddle named loan player Andy Kiwomya on the bench and alongside him was young midfielder Carl Smith who made his debut during the second half. It proved to be another difficult day for us. An early Chesterfield goal was enough to give the home side the points but it was a day when they were grateful to their brilliant goalkeeper Billy Mercer for keeping a clean sheet and ensuring his team won the game.

We needed a good start; we didn’t get one. With less than three minutes gone we fell behind. Chesterfield won a corner which was taken by Jamie Hewitt. Paul Holland had a free header and he found Tony Lormor who backheeled the ball into the net.

The rest of the first half was nothing to write home about with neither side offering too much although both Mark Ford and Andy Cooke missed good chances to equalise. It was Chesterfield though who came closest to adding a second right on half time when Lormor this time completely mishit his shot from the six-yard line and with the goal at his mercy.

If the first half had been less than inspiring for us, the second was something different. We dominated virtually from first till last. Cooke was close with an overhead kick after Steve Blatherwick had headed down a Waddle corner and then Cooke hit the post having been played in by Blatherwick.

Barnes failed to hit the target with another effort but when we did get our efforts on target, there was Mercer. He denied Cooke with a stunning save while the striker hit the post again. He kept out a Lee Howey effort and then somehow denied Barnes with a great diving stop.

Despite our best performance of the season in the second half, we still couldn’t get a goal but as reported in the Burnley Express, bad runs end as good runs do and surely if we continued to play like this then the goals would come. Cooke and Barnes had scored goals aplenty in the previous season, surely it was only a matter of time before they got back on the scoresheet. The one consolation was the defence. No team had conceded less goals in the opening weeks of the season.

Waddle said after the game: “We played some excellent stuff today. We played a team who were second in the league and we looked like the home side. I gave all the lads a pat on the back at the end because they all played well.

“We are still waiting for that little bit of luck in front of goal. I’m not bothered how the goal comes but when it does there will be one hell of a celebration. I’m not bothered it if is an own goal, but if it is, I’ll buy a create of champagne for their lad.”

Chesterfield remained second, behind Watford who beat Wycombe. Grimsby’s home draw against York on the Tuesday meant we dropped to the bottom of the league.

Four past and future Clarets found their way onto the goalscorers list. Brendan O’Connell netted the opener in Wrexham’s 3-2 home win against Wrexham while Micah Hyde also got the first goal in Watford’s win against Wycombe. Blackpool beat Carlisle 2-1. Tony Ellis opened the scoring but Carlisle equalised on 89 minutes. A debut last week, and a first goal this week, Clarke Carlisle scored their stoppage time winner.

Ellis and O’Connell were among eight players who had scored four goals but leading the way was Wycombe’s Mark Stallard with five.