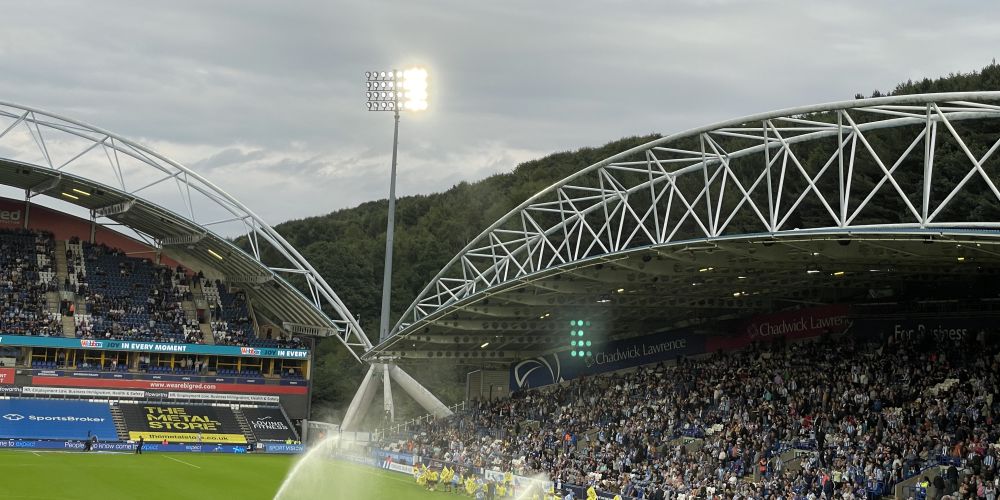 When the final whistle blew on a 1-0 win at Huddersfield last night, the large contingent of Burnley fans in The Magic Rock Brewing Stand at the John Smith’s Stadium gave the performance and result one last roar as we kicked off the new season with three points.

The support had been terrific all night from over 2,300 fans who I’m sure had no idea what to expect before the game given that this was very much a different looking Burnley team, but we all saw an enjoyable game and performance, particularly in the first half with debutant Ian Maatsen scoring on his debut.

Debut – now that was an oft used word last night. We all did some guessing as to what the team might be. We knew there would be a good number of debutants given the changes since last season ended and when the teams were announced there were a total of six players guaranteed to make their first Burnley appearances on the night with the potential for more from the bench.

There was no Jay Rodriguez, reportedly injured. That was perhaps the only surprise as Arijanet Muric, Taylor Harwood-Bellis, Maatsen, Josh Cullen and Samuel Bastien, five of Vincent Kompany’s signings, all started. They were joined by 19-year-old Dara Costelloe, last season’s leading goalscorer for the under-23s, who had previously been on the bench during the run-in last season. His was a surprise inclusion, more so given he hadn’t been given a squad number when they were released on the day before.

Embed from Getty Images
Is six a record? No is the answer. It did equal the number for the first game in the post-war era in 1946 but for the home game against Colchester in 1987, our first post-Orient game, Brian Miller named seven debutants in his starting eleven. Steve Gardner came on as a substitute that day, the first time we’d ever brought on a second substitute in a game, to make it eight. By the final whistle last night, we’d equalled that total.

Although we’ve no new club captain as yet, Jack Cork out the side as expected with the new manager making his way to the away team technical area soon afterwards. There was no cap, he appeared in a black suit and white shirt, very Sean Dyche like but without the tie. However, he was more Stan Ternent than Dyche with the footwear, a brilliant white pair of trainers.

Once we got the team news, we discussed the potential formation. The expected 4-2-2-2 was agreed upon and it was, to an extent, but rather than partner Ashley Barnes up front, Costelloe often occupied as position out on the right.

We got off to a slow start, well maybe for the first minute or so with Huddersfield, who kicked off, getting the ball forward and into our box. It was literally around a minute before we got control and never let go during a first half that we totally dominated with football that was so easy on the eye.

Embed from Getty Images
I remember the first time I ever saw an Arsenal team under Arsène Wenger play live. It was in the FA Cup tie on the Turf in 2008. Their movement was terrific and it was difficult to take in at times. I’m not suggesting we are at that level but with so many new players too, and with the movement of them on the pitch, it was at times puzzling to see players in areas of the pitch you wouldn’t expect them to be.

We were looking so good and we had opportunities to break the deadlock early in the game. There was one such chance that I thought Barnes had spurned, but positioned in the stand directly behind Muric, I was much too far away to realise that he’d been fouled by Tom Lees and that a penalty should have been awarded. There is no VAR for us now so that was that, although, given our experiences of VAR, I’m not sure we’d have been given it.

‘Pass and move at pace’ was how Andy Hinchcliffe was describing it on television. John Angus would have suffered a nose bleed if he’d been asked by Harry Potts back in the 1960s to get up the pitch but our full backs Connor Roberts and Maatsen were doing just that and it was one such advance from Maatsen that led to the goal.

When Huddersfield did get possession, we closed them down so quickly, not giving them any time on the ball. It was a real feature of our play. This time, a stray Huddersfield header saw Maatsen pick up the ball in the centre circle just inside our half. He moved forward and played a ball inside which Barnes dummied for Josh Brownhill. The midfielder got into the box before laying the ball back to Barnes who almost stumbled on it, but it was enough for him to claim an assist. Maatsen had continued his run forward and simply stroked a right foot shot in the far corner.

Embed from Getty Images
I’m not sure many Burnley fans were certain who’d scored the goal initially but before we’d time to settle, only a superb save from Lee Nicholls prevented us from doubling the lead. This time it was Roberts who got forward, played a one-two with Roberts blocking his shot.

With Huddersfield offering virtually no threat, television pictures show some of their fans looking frustrated and despondent. It just needed a second goal from us and probably should have come when Maatsen set up Costelloe only for the youngster to get it all wrong and send an effort well wide.

Overall though, he had an excellent debut. His pace and overall movement on the right hand side of the pitch, whether it be wide or coming inside, was always a threat that the home side struggled to deal with. Having seen him step up his game so much last season in the under-23s, I was delighted to see him given and take his chance last night and I’m sure we are going to see much more of him.

Half time came at 1-0. If we can be critical, the game really should have been won and we knew Huddersfield would be better in the second half. They were, but I’m not sure they ever really looked as though they would get back into it.

Embed from Getty Images
They had a better spell at the start of the half and then again midway though but Muric was never called on to make a save and, although we weren’t the same threat, we always looked the more likely to score.

With twenty minutes remaining, Kompany made his first change with Scott Twine, his first signing, replacing the impressive Bastien. Four minutes later, Costelloe left to a superb ovation from the Burnley fans with Vitinho coming on.

It all prompted ten minutes or so of almost total dominance by the Clarets and quite how we just couldn’t get a second is beyond me. The closest we came was from a free kick. I had the perfect view from my vantage point and couldn’t see how Twine could possibly get it round the wall and anywhere near goal. He was so, so, close with his effort hitting the post.

As we neared the ninety minutes, Huddersfield introduced Jordan Rhodes as a substitute with the Burnley fans quickly referring to one of his former clubs. He used to have that knack of scoring goals against us; his first goal against Burnley was nine years ago next month for Huddersfield. His very presence makes you feel edgy, but he doesn’t score many now.

Embed from Getty Images
The referee added on an extra five minutes, more nerves I suppose with score still 1-0 but, winning one free kick apart, we never came under any threat. Anything but a win would have been an injustice in any case.

Overall, we were outstanding. From the two rampaging full backs all the way through to Barnes who I thought was outstanding up front.

I know the mood of football fans is based on the result, but there was a real air of delight coming out of the ground last night. We get so caught up in games at times, getting nervous with just a one goal lead as we come close to the end, that we don’t always see what’s in front of us. Soon after the final whistle, I received a text from a Sunderland supporting friend of mine. He’d watched on TV and said: “A very entertaining game. You were class. What were you worried about?”

I’m not getting carried away; my feet are firmly on the ground, but I have to say that I was delighted with last night’s performance. The fans were singing ‘We are top of the league’ and we are for now. There’ s a long, long way to go but you can’t start much better than that although, at my age, I’m unlikely to be seen wearing a suit and trainers.