Tella at the double

Nathan Tella scored twice in last Saturday’s 3-3 home draw against Blackpool and his performance has landed him another double as the winner of our man of the match vote and player ratings. 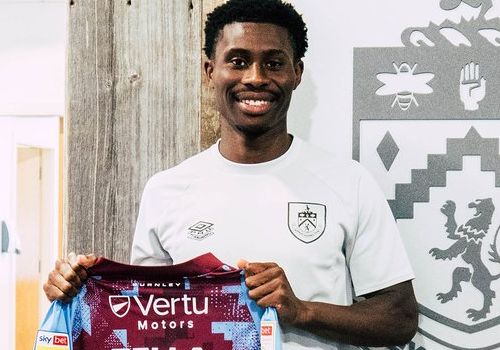 Making his first start for the Clarets, Tella scored the goals that took us into a 2-0 and 3-1 lead in a game that we eventually could only draw, but the home crowd were excited by the performance of the player who is with us on loan from Southampton.

He polled 66% of the vote, way ahead of Josh Brownhill who came second with 11%. Goalkeeper Arijanet Muric came third with a 7% share while Taylor Harwood-Bellis was fourth with 6% of the vote.

The result has given Tella the maximum ten points towards the Up the Clarets Player of the Year with Brownhill picking up six points. Both Muric and Rodriguez won two points with one point each for Cork and Harwood-Bellis.

That means a change at the top again with Brownhill going ahead of previous leader Ian Maatsen. Brownhill leads by five points with Cork a further five points behind Maatsen.

You can still VOTE for your man of the match against Shrewsbury. That ends at the end of tomorrow.

The Blackpool result is below, followed by the current player of the year table.