Having lost at Watford on the opening day of the season, we couldn’t respond with a win as the home programme kicked off in 1997 with Gillingham holding us to a 0-0 draw.

There was bad news for some in town when it was revealed that Burnley’s mad cow disease dump was to be extended for a further five years. A total of 33 virus-infected cow carcasses had been secretly dumped at Rowley Tip in 1990 and now there were plans to tip more rubbish there.

Resident associations from Ridge Row and Top O’ The Town had joined forces to take on the county council to try and halt the plans, claiming the high rise dump would leave a bad smell, impose on their views and cause noise and dust pollution. 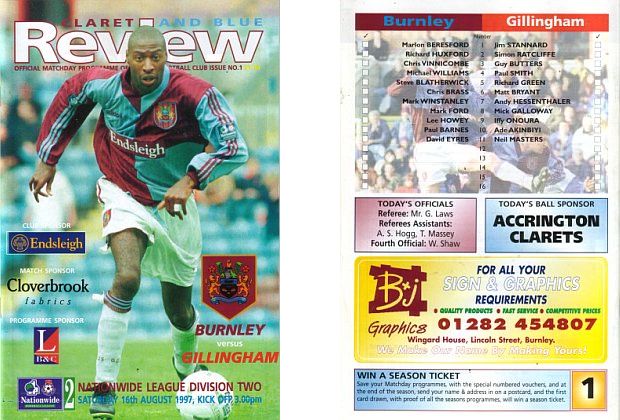 There were problems on Stoops Estate in Burnley when youths threatened to riot and hurled petrol bombs at police. Residents were left in fear but one said: “This was just kids throwing bricks, threatening to start a riot and beat people up.”

Arrests were made with Police Superintendent Mike Griffin blaming it on boredom and the hot weather, but he warned that they were going to get tough on people who went out intending to cause trouble in the area.

One youngster had a good day that week though when he was invited to join the Burnley Express after writing to editor Chris Daggett saying he wanted to become a journalist when he grew up. Nine-year-old Harry Creighton spent the day with the editorial team and was delighted when he was given the opportunity to interview Burnley player Vince Overson at a fun day held at the Spar shop in Brunshaw Road.

Thankfully, he wasn’t at Asda where a young woman was attacked in the car park at around 10:30 p.m. She was hit on the head by one man while being held by another and they snatched her purse containing £90 in cash. Despite there being CCTV cameras, police could find no evidence of the attack.

In our last report, we referred to the cancelling of Corrie Jordaan’s contract at Lowerhouse Cricket Club. “Have they taken leave of their senses?” wrote Alan Waterworth in a letter to the Burnley Express, describing Jordaan as the best match winning bowler to grace the club since the war.

For one young Burnley cricketer, the future was looking very bright. Jonathan Clare had just finished a ten match spell as captain of Lancashire under-11s. He’d been involved in a record partnership of 213 with Keith Barker, then of Enfield and today playing for Hampshire. Both made centuries and young Clare, who went on to play for Derbyshire before injury ended his career prematurely, scored a total of 450 runs at an average of over 64.

As for the football, it was Gillingham coming to Turf Moor for the first home game of the season and manager Chris Waddle asked the fans to turn Turf Moor into a cauldron of noise. He said: “The fans are very important. You come here and look at the stadium and think this looks nice, but if the crowd can get behind the team we can make this a very intimidating place for teams to come and play.” On the field, he added: “I have been very happy with the way we have competed, and although our passing could be better, as the season progresses we will all get better.”

Expected to come up against another direct side in Gillingham under the management of Tony Pulis, Waddle said: “Football is football, and it is part of the game that they can choose to play like that. Again we will have to compete, but against Watford and Lincoln, when we won the ball, we showed what we can do. We need to be more consistent and enjoy the ball, but work hard to get it back.”

Approaching 12,000 turned up but didn’t see us get off the mark with our first win or our first league goal as the game ended 0-0, but it was an afternoon ruined by an appalling performance from referee Graham Laws.

In a game that left the referee with little to do, he showed five yellow cards, two red cards and gave an astonishing 35 free kicks. He made sure there was little to enthuse about during the game. He sent off David Eyres for two challenges, one of which was something and nothing, dismissed Gillingham’s Leo Fortune-West for elbowing Chris Brass and somehow managed to find five other players to yellow card. Yet, he missed the most blatant of penalties while failing to take action for the worst foul of the afternoon.

Gillingham surprised people with their style of football. It was nothing like we’d expected and they looked at all times to carry the ball alongside a neat passing game but it was manager Waddle’s new players who were standing out for the home side with both Mark Ford and Michael Williams playing exceptionally well in midfield.

Both Eyres and Gillingham’s Ade Akinbiyi had early chances but it was Burnley who looked the brighter until the first big incident which saw us reduced to ten men. Eyres went into a challenge with Simon Ratcliffe which left the Gillingham player down. There really was no foul and one wasn’t given. That was until the linesman flagged. Laws spoke to him and then astonishingly sent off Eyres.

Gillingham dominated the rest of the half but it was Burnley who should have been given the chance to go in front only for the clearest of fouls on Ford in the box to be ignored when a penalty award looked certain.

Akinbiyi missed the chance of the match early in the second half but Burnley were resolute and had a really good spell in the second half despite being a man down. Lee Howey headed a chance straight at the keeper and then there was another potential penalty shout for handball but the only big decision came right at the end when the numbers were levelled up when Fortune-West was given his marching orders. He’d only been on the pitch for five minutes and again it was a linesman’s flag that led to the dismissal.

A 0-0 draw in the end and a first point of the season but no one in the Burnley camp was happy with the red card shown to Eyres. Waddle said: “David is a genuine lad and he said he went to block the ball. I’ve spoken to the referee and he says that if I can get video evidence to back me up, he will see what he can do about altering his decision.”

It was very much a quiet week in terms of goals with only twenty goals scored in the twelve games and only Wrexham, who beat Oldham 3-1, scoring more than twice.