The Orient Game – My memories of The Day 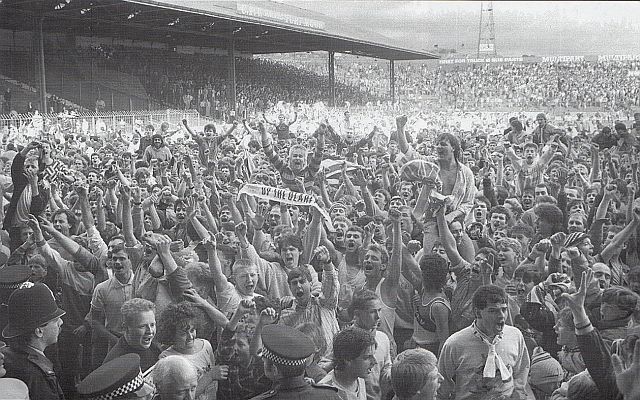 It was the usual 8am departure from North Curry (a Claret outpost on the Somerset Levels) but such was the magnitude of the game that Sue and Ben waved me off as the car bedecked with scarves made its way North on autopilot.

The trip was fairly uneventful, but as the traffic slowed to a crawl in the usual places I was gradually surrounded by cars and coaches full of Everton fans on their way to see their team crowned champions of England. I was amazed at the barrage of good luck messages shouted from car windows and the thumbs up from coach after coach. The bond that binds fans, except for the 90 minutes when we face each other, was truly brought home to me; it was something I was to witness again later that day.

The importance attached to the game had culminated in a feature on BBC news the previous evening but nothing prepared me for the atmosphere and the size of the crowd. Was this really the ground I had shared with only just over two thousand not long before? The town had finally realised what they could be about to lose.

The game was a blur and my overwhelming memory was my view from the Longside and being right behind Neil Grewcock as the ball left his foot, curled ever so slightly, and then hit the net. Social distancing was definitely not the order of the day in 1987 as bedlam descended!

Anyone with a transistor radio was everyone’s new best friend as we all tried to keep up with events elsewhere as we knew our fate was ultimately outside our hands. When the game finished and the Longside fences were scaled for mass celebrations on the pitch I just stood there drained.

In the away section, the Orient fans had just seen us snatch their chance of a play off place from them in this the first year of these new arrangements which, of course, included automatic relegation from the Football League. They stood, took it all in, and then rushed down to the fence by the pitch where they paused and then started chanting – Burnley, Burnley. Once again, I witnessed that camaraderie that is all too easily forgotten.

Whenever I hear Paul Simon singing Graceland I think of the drive back as I enjoyed my new CD; so many of our memories are linked to the music of the time.  I cannot remember anything else of the evening but I never slept that night, I was still buzzing.

Much has been written of the 9th of May 1987 as the turning point on the long and bumpy road back. Ben was 3 a few months later and Joe arrived shortly after. I am sure I would not have been able to share so many wonderful Burnley FC related memories with my boys as they grew if the day had panned out differently.