Time to crack on for record breaking Clarets 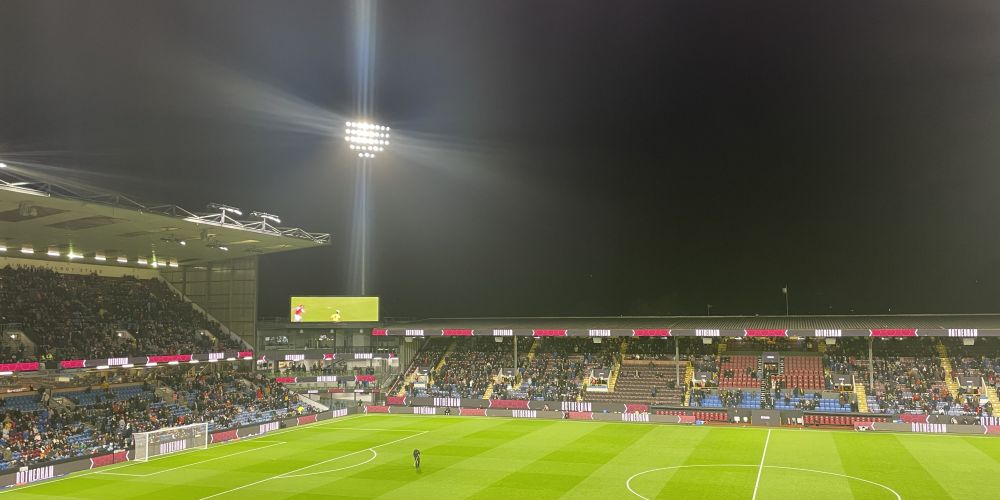 The Clarets moved three points clear at the top of the league last night with a 3-0 home win against Birmingham City that has taken our points total to fifty and with 49 goals scored.

It took us less than a minute to take the lead through Anass Zaroury on his return from World Cup duty. Connor Roberts added a second as half time approached with substitute Nathan Tella putting the icing on this particular cake in stoppage time as we hit three for a fourth successive league game.

The last time we played at home against Middlesbrough, it was the coldest of days but that really cold spell has now given way to rain and it poured down for all of us making our way to the Turf for this 8 o’clock kick off. We had a change of venue pre-match, leaving us with a walk through town to get to the ground, as was the case for many others, and thankful to get through the turnstiles.

By then, the team news was through and showing just the one change from that which had beaten Middlesbrough ten days previously; Zaroury returning for Jóhann Berg Guðmundsson who could have considered himself very unfortunate to be sat on a very attack minded bench.

Embed from Getty Images
This was the first game of the second half of the season with Birmingham the first team to play for a second time. The away game in October at St. Andrew’s had ended in a 1-1 draw with Guðmundsson giving us a 74th minute lead only for Scott Hogan to equalise six minutes later.

It was one of a number of draws that had seen us concede reasonably late equalisers, but this was the last time we shared the spoils with every other league game since won apart from that one defeat against Sheffield United last month.

This time, it didn’t take anything like 74 minutes to go in front; it didn’t take one minute with Zaroury’s opener recorded at 48 seconds, the quickest goal in the Championship this season. It’s not easy to score so quickly in a game, more so when the opposition have kicked off and got the ball up the pitch before conceding a throw in.

They’ve moaned about a foul when Jay Rodriguez gains possession of the ball but for me, this is one decision that referee Darren England, who didn’t have the best of games it has to be said, got right. Jay Rod got the ball out to Zaroury on the left but his ball in was met by a defender who could only head the ball away to Roberts. The full back played a one-two with Manuel Benson. The return pass left Roberts clear on the right of the box and he pulled the ball back for Zaroury to hammer home with his right foot. It was terrific from Roberts but also from Rodriguez who took defenders away and from Zaroury who just pulled back to give himself space. It was some way to announce his return too from World Cup duty.

Embed from Getty Images
What a start, but if we thought that was going to lead to us dominating and laying siege on the Birmingham goal, we were mistaken. For the next period of the game, Birmingham were the team in the ascendancy although they never really looked capable of finding that chance that would give them the opportunity to draw level.

However, as the half progressed so we regained the initiative and we looked far more threatening than Birmingham had. We almost got a second too that would have been close to identical to the first but Benson nipped in to get to Roberts’ pull back before Josh Brownhill and fired his shot over the bar before apologising to Brownhill who had looked better placed and positioned.

The half wasn’t without its fun either. It’s now pantomime season and referee England and his team were giving us quite a few ‘Oh yes it is, oh no it isn’t moments’. There was one stoppage that saw three players yellow carded. Josh Cullen for a foul on the touchline in front of the Bob Lord and Hannibal Mejbri for a foul on Roberts were both correct. He also carded Tahith Chong in the aftermath for pushing Jack Cork into the referee. I think Chong was fortunate to stop on and there was no need for Hannibal to have another go at Roberts. The referee saw neither of those and therefore relied on his assistant. Enough said there.

It was probably no surprise; just a few minutes later these two officials somehow allowed Juninho Bacuna to take a free kick to himself. Thankfully, that led to nothing but soon after a Burnley attack very much did and it ended with Roberts doubling our advantage.

Embed from Getty Images
I thought Blackburn had come back when Birmingham were caught out trying to play the ball out from the back. We won it out on our left and eventually got it across to the right and to Roberts. This time his one-two was with Brownhill and he took the return with one right foot touch before finishing with a neat left footed shot into the bottom corner.

Birmingham did finally have a shot at goal in first half stoppage time. It came from a free kick but I’m not sure it was a foul in the first place. What I do know is that we went in 2-0 up at half time and looking more than comfortable for another home win.

We played like a team that had the game won too in the second half although we did come close more than once. Benson fired a shot just over, Cullen shot wide and some brilliant improvisation almost got Jay Rod a goal.

The only time Birmingham seriously threatened was when Taylor Harwood-Bellis blocked a Troy Deeney shot although they did put us under pressure at times through the long throws taken by Marc Roberts.

Embed from Getty Images
Our visitors might have been down to ten men around the hour mark and damn well should have been. Hannibal caught Benson with a shocking challenge. I’m sure some referees would have given a red; others might have given a yellow. England, incredibly, not only didn’t show a card but didn’t even deem it worthy of a free kick. Already on a yellow, Hannibal should undoubtedly have walked.

Benson didn’t last too much longer; he was replaced by well again Nathan Tella and as time played out, we made three other changes. Two of those substitutes combined to put the icing on the cake with a third goal in stoppage time. Charlie Taylor, who had come on for Ian Maatsen, played a delightful ball down the left which Tella picked up. Able to beat the defender for pace, he moved inside and I’m sure everyone in the ground was confident that he would score. He finally slipped a shot past John Ruddy and the Jimmy Mac went up to celebrate before the ball had crossed the line.

It’s hard to believe but that’s the first goal Tella has scored on the Turf since he got a brace against Blackpool back in August. He certainly looked pleased with it.

Three goals again, and that’s three in each of the last four games, an achievement picked up by Sky co-commentator Don Goodman who said: “Four Championship games in a row this magnificent team have scored three goals.”

Embed from Getty Images
I’m not sure when we last achieved that but I can look back at the last time we had such a run of consecutive home wins. Last night took it to seven since the 1-1 draw against Stoke. The last time we equalled or bettered that was across two seasons; we won the final five games of the 2008/09 promotion season and the first four of the next in the Premier League. In one season? That was Stan’s promotion season when we won eight, starting with a 2-0 win against Bristol City in October 1999 and ending with a 1-0 win against Bristol Rovers in February of the following year.

On the subject of Stan, he can be thanked for the headline. He always would say at the start of a season that we will get to fifty points, then crack on and see where it takes us. This season we have got there quicker than in any other season but three times we reached the half century in the 25th game. They came in 1991/92 when we won the Fourth Division and in 2013/14 when we went to the Premier League as runners-up.

Before we get too carried away, a word of warning. We had 49 points at this stage in 2001/02, led the league but didn’t make the play-offs. Having said that, if we continue to play the way we are then we really should have nothing to fear.

There was good news too at the final whistle. It had stopped raining and we were all able to get home without another soaking. Having said that, I’d happily take another downpour after a performance and result like this.

Yes, Stan and Vinnie, it’s time to crack on.