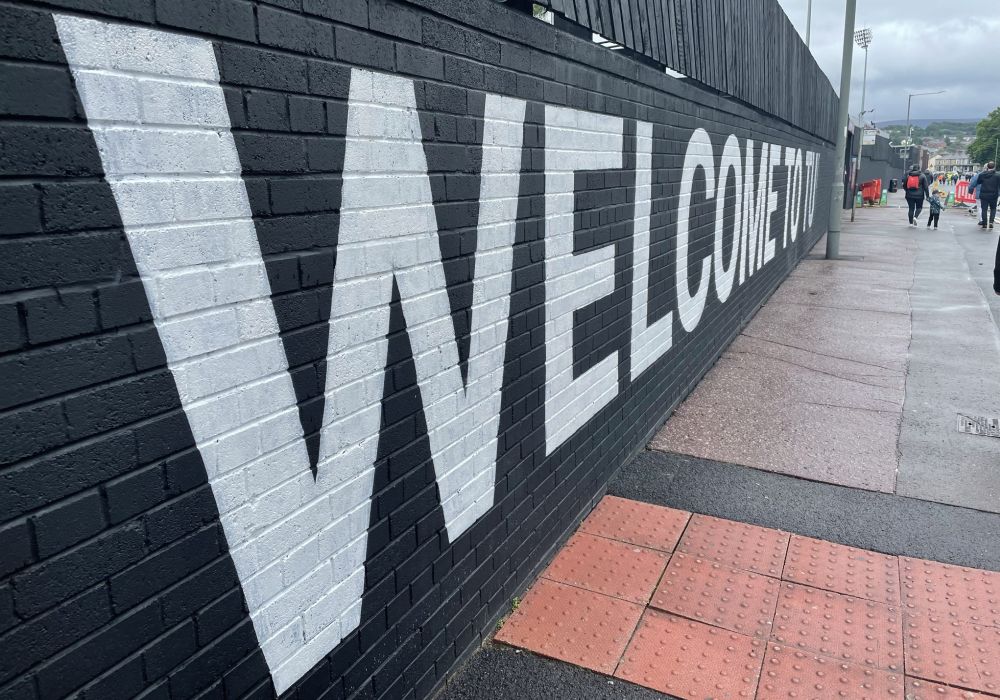 I know some supporters were able to go to the Liverpool game at the end of last season but yesterday the gates opened for all for the first time in exactly 17 months since we drew 1-1 against Spurs on 7th March 2020 when La Liga club Cádiz visited for a pre-season friendly.

It was probably around fifty minutes before kick off when I arrived, the first sign of change being the new screen by the traffic lights (or the Welly corner as it was always known). Then we were greeted with a big white sign painted on the wall on Harry Potts Way which read “WELCOME TO TU” which I assume is still to be completed.

The walk down towards the Park View corner took an age as I bumped into people I’ve not seen in such a long time, catching up with them, I think that was probably the best bit of the day to be honest. While talking to friends we saw Barry Kilby go in through the turnstiles. It must be some time since he’s had to do that.

It was rather strange at the turnstiles for the Longside upper. There were long queues when I got there and I heard a steward tell supporters: “Be patient, we’ll get you all in.” There were no queues at all at the next set of turnstiles just a few yards away.

The Longside looks like Ewood Park (or Goodison Park or Stamford Bridge) from the outside with all the gates painted in royal blue but I’m not sure what on earth has gone on behind the Jimmy Mac. I thought I’d turned up at Watford with everything painted a bright yellow (take your sunglasses next week, it is that bright).

Entry was easy. I scanned my own QR code from my phone while the bloke behind me followed by handing over a paper ticket. He got in too so that must have worked.

Nothing much had changed. There were empty spaces where there will be seats in the away team side of the directors’ box. The new fancy Recaro seats were in the dug outs and the pitch looked immaculate.

The team was close to what I’d imagined it might be, but I was surprised to see Chris Wood play so soon after his return from Japan.

I’m delighted he was because in a first half that we dominated he was a shining light alongside the impressive Matěj Vydra and Dwight McNeil. Both strikers went close and, in one incident, only referee Ollie Yates will ever know how we didn’t win a penalty when Vydra was taken out.

The two strikers linked up brilliantly in one move down the right only for us not able to get a finish. It had been decent and it just needed a goal as half time approached. I don’t think anyone expected the goal to come at the other end. Ben Mee headed out a cross, but it fell to Martín Calderón whose sweet right foot shot from 25-yards found the bottom corner of the net despite Nick Pope’s despairing dive.

With changes made at half time we didn’t have long to wait for Cádiz to double their lead. It was just a routine ball played into the box from the left which Álex Fernández headed home. They should have had a third too when Álvaro Negredo raced through after an Erik Pieters mistake, but he shot tamely at Pope.

In truth, the game had gone for us. We might have had a penalty when Jay Rodriguez was fouled and the closest we came was a saved Jóhann Berg Guðmundsson free kick. We then saw an appearance from Aaron Lennon who received a good reception from the home crowd. It had been suggested during the week that he was just training with us but Sean Dyche said after this game: “He’s someone we know well, who has done a good job for us in the past. He’s someone I didn’t want to go in the first place. There’s a lot to that story, which everyone knows. He played quite a bit of football last year and is looking very fit and well. He asked me if he could come back and train and at the minute it’s just that and we’ll see where that leads to.”

Dyche did say, in terms of the market: “We are actively looking for players.”

All in all it was a dull second half once that second goal had gone in and now, for the Turf Moor crowd, it’s a wait until next Saturday when we kick off the new season against Brighton.