Burnley have completed the signing of Scott Twine from MK after the player had an outstanding season in League One in his one and only season at that club. He’s joined the Clarets on a deal until the end of the 2025/26 season. 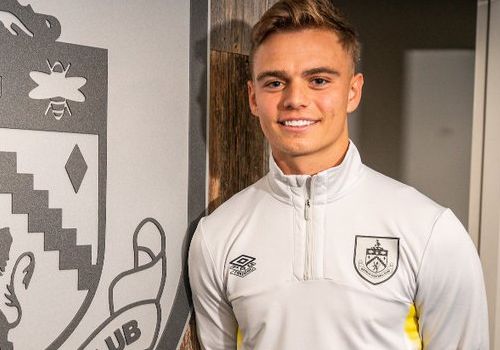 The 22-year-old kicked off his career at his home town club Swindon where he made his debut in League one in a 3-0 defeat at Charlton in April 2017. By the time he left Swindon in June last year, he’d made fifty league appearances for them, scoring eight goals.

During that time he went out on loan to Chippenham (twice) and Waterford but then spent the entire 2020/21 season, his last as a Swindon player, on loan at Newport, scoring six times in nineteen league appearances.

Just over a year ago, he made a permanent move to MK in a deal believed to be valued at £300,000 with Swindon having a 20% sell on clause. With him out of contract, that was an agreed compensation figure between the two clubs. On signing for his new club, he said: “There were a few clubs interested but after I spoke to the gaffer, he sold it to me. From that day, I couldn’t wait to sign and get it sorted.”

That manager was Russell Martin but Twine didn’t get the opportunity to play for him; by the time last season kicked off, Martin had moved to Swansea with Liam Manning becoming the new MK manager.

It didn’t stop Twine, described by MK as an attacking midfielder. He played in all but one of their League One games last season and netted twenty goals including some long range strikes and free kicks.

Although his final games last season were in the play-off semi-final defeat against Sam Vokes’ Wycombe; Twine had a remarkable last game in the league when he scored four in his team’s 5-0 away win at Plymouth.

Twine said on completing the move: ““I am buzzing. I have definitely made the right decision joining Burnley. I spoke in depth with the manager and his plans are exciting, it was a no brainer for me to sign. I can’t wait to get started and it feels like the right place for me.”

A first signing for manager Vincent Kompany who said: “We are delighted to have brought Scott to the Club. He’s an exciting young player that will help us in the short-term process and in the long-term project at Burnley Football Club. He’s a player we have looked at for a little while now, we know he can score goals and affect games. We’re glad to welcome him to the squad.”