Burnley’s unbeaten run in the Professional Development League came to an end yesterday with a  3-2 defeat against league leaders Sheffield United but we came so, so close to scoring an equaliser in the final minute of stoppage time. 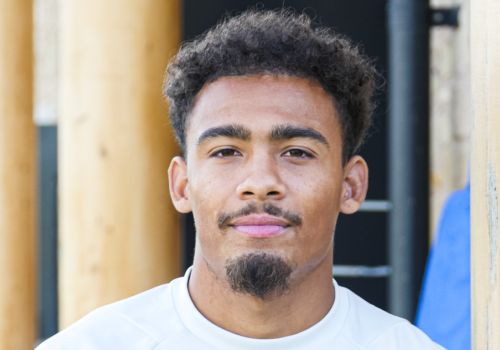 We started brightly and forced the first save of the afternoon when Blades’ goalkeeper Jordan Amissah denied Seb Thompson at the expense of a corner. That corner led to the opening goal but it came at the other end as the visitors broke quickly for Oliver Arblaster to finish with ease having been played in by Reda Khadra who is on loan at the club from Brighton.

Just after the half hour, they doubled their lead with an easy finish for Louie Marsh and but for a good save later in the half they would have gone in with an even bigger lead.

Early in the second half, they smashed a shot against the post and then Marsh got his second. At 3-0, the game looked as good as over. They were dominating and you wondered just how many they might get.

Then it changed. Played in by Owen Dodgson, Marcel Lewis (pictured), who was our outstanding player on the day, pulled one back with a shot through the goalkeeper. That was on the hour and eight minutes later it was 3-2 when Dara Costelloe finished superbly with a flick over the goalkeeper.

It really had changed and we dominated the game from then with Sheffield United more than once losing the plot. There was a brawl on the far touchline when they grabbed the ball at our throw in and then they were forced to take off Jack Robinson who had completely lost it. Robinson was the player who should have been sent off in the League Cup game against us last season for a shocking challenge. This time, he thought it acceptable to start hurling foul and abusive language at anyone he chose. They quickly got him off the pitch.

We just couldn’t get that equaliser but in the fifth minute of stoppage time we won a free kick on the left. I joked that Kevin Long would head it in for the equaliser and how close my prophecy was. He won the header but the ball hit the Blades’ goalkeeper in the face and our final chance had gone, the game ending in a 3-2 defeat