Burnley’s run of league games without defeat, a run that had stretched to 22 games since an Easter Monday loss at Sunderland, came to an end in November 1972 with a shock home reverse against struggling Orient who kicked off in 20th place in the table. 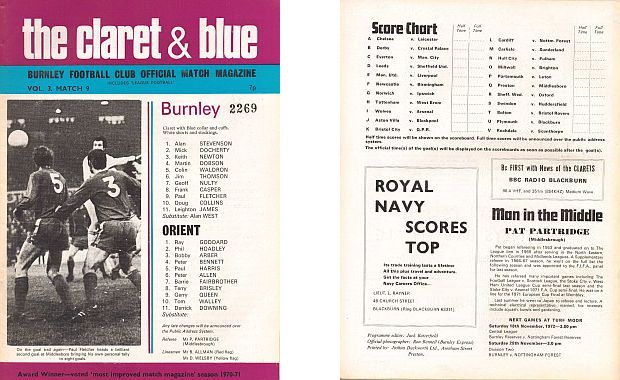 The town reported that Guy Fawkes night had past relatively unscathed although one local 11-year-old boy was very fortunate. The boy from the Burnley Wood area attended a local bonfire but tripped over a piece of wood and fell into the fire. He had burns to his face, body and hands but was looked after by a man who quickly took him to hospital for treatment and then went to get his family. The burns weren’t too severe but his mum said he’d been very lucky because he still had £1.50 worth of bangers in his pocket. Had they gone off it could have been much more serious.

Don’t waste water. That was the plea from Mr S. P. Lord, the chief of Calder Water Board. He warned that should the abnormal dry spell of the summer and autumn continue into the following summer there could be a shortage of water that would leave Burnley facing a dire situation. He said: “While the supply situation is not yet serious there are one or two reservoirs a lot lower than we would like them to be. We are having to shunt water from one to another. We are not putting any restrictions on the use of water as yet but are asking people to economise.”

The water board were in trouble when a local company secretary accused them of using outdated rating methods. He accused them of being grossly inefficient. Mr Jack Nuttall, the company secretary, said his water rates had jumped over 100 per cent since 1964 and demanded a close examination of the board’s costs, and alleged that every employee had a vehicle. “These don’t run on water from the heavens,” he said. And from water to fire. That was the problem facing Mr Harry Livesey of Argyle Street when he returned home from a night out to find his home a blazing inferno. Worse still, as he stood and watched his home go up in flames he was attacked and beaten up by three men. Mr Livesey had two dogs but the one piece of good news was that both escaped in time. The ground floor damage was described as severe and it was thought the fire had been started by a faulty paraffin heater.

Hooliganism was on the rise and Alderman Tom Gallagher urged that magistrates be given more power to deal with the teenage stupidity which had led to a drastic increase in vandalism and violence in Burnley. Councillors and the police were set to meet to thrash out the problems and the Alderman said: “Magistrates are restricted in what they can do. They should be given far-reaching powers to really go to town on these hooligans. Fines are no deterrent at all. They pay them straight away, and walk out of court laughing.” He had a solution though, adding: “I don’t want  to bring back the birch by any means, but these youngsters should have their weekends taken away and given something to do that will help let off some of their high spirits. They should be sent canoeing and mountaineering, punishment that won’t take all the spirit  out of them.” He confirmed: “I’m not against youngsters as a whole.”

A teenager was accused in court of having been found fighting mad in Centenary Way. He was crossing the road and forced a car driver to swerve. It was the driver who stopped, got out of his car, and started the fight before the police arrived. He apologised to the court for being drunk but denied that he’d been fighting mad. He was found guilty of being drunk and disorderly. Two girls, one aged 18 and the other 16, were attacked in Thompson Park. One had a bruised nose, a cut lip and her hair torn from her head, the other received a black eye, bruises and injuries forcing stomach pains. The two responsible were two more 18-year-old girls. Both admitted the offences and of stealing from the girls and were bailed for reports.

In another case, a 21-year-old man had lent on the door of a closed shop and was amazed to find it was unlocked forcing him to fall into the shop. I think he’d have been alright had he got up and walked away but instead he nipped in and took some clothing to the value of £47.75. Mr Peter Lawson, defending, said his client had eaten fish and chips and felt ill so stopped in the doorway when the door opened. He didn’t want to take anything but he was encouraged by a friend. Some friend, it landed him three months inside.

A football supporter was fined in court after causing trouble at the first home game of the season against Carlisle. The court was told that he was Burnley’s most rabid supporter but his partisanship and drink had caused his behaviour.

Despite being top of the league, gates were down at Turf Moor and that was not good enough for a group of fans from London who demanded that local people get out and support the club. “What is wrong with you?” one of them blasted at the lack of support. They arrived early to go leafleting around town to try and drum up more interest.

Ahead of the game against Orient, third from bottom in the league, manager Jimmy Adamson said: “Obviously they want points as badly as we do even if it is for a different reason. They will probably come to defend and try to frustrate us. It will be up to us to break down this resistance. It is important to us that we win. We must not be complacent and no team can live off their past results.”

Keith Newton had been the only doubt for Burnley but he was passed fit and the only change was Alan West replacing Billy Ingham as substitute.

All good runs come to an end. Burnley had suffered defeats at Blackpool and Sunderland by 4-2 and 4-3 scores at Easter with the demonstrations against manager Adamson hitting a peak. There were six games to go in the season after those two and all six were won, and that had been followed by an unbeaten start to the 1972/73 season stretching 16 games. Someone, somewhere, sometime, was going to end the run, but I don’t think we expected it to be at home against one of the poorest teams in the division, and that’s what Orient were.

We should not have lost the game. For long periods Orient looked like relegated fodder and in truth the game should have been all over before they had the chance to come back and snatch the points. Burnley didn’t play badly at all for the most part. We continued the sort of form that had seen us go to the top of the league. We moved the ball around well, all but outplayed Orient and created numerous chances. Unfortunately, we scored only once. It came after nine minutes when Doug Collins progressed down the left wing and then switched the ball inside to Newton. Goalkeeper Ray Goddard failed to hold Newton’s shot, lost possession again when challenged by Leighton James and Martin DOBSON followed up to hammer in the loose ball.

It was one way traffic in the most one sided of first halves but we didn’t force enough saves out of Goddard. He was only really extended twice more, once from a Paul Fletcher header and then a shot from the same player. Even so, there were no concerns at half time despite the slender one goal lead and having to face a second half without the influential Dobson who had been forced off with an injury and replaced by West. Nothing changed. Both Frank Casper and West had goals ruled out for offside, and both looked very harsh decisions. Phil Hoadley kicked a Geoff Nulty shot off the line with Goddard beaten, and such was Orient’s frustration that they faced the wrath of referee Pat Partridge who twice had to get his book out after bad tackles.

It was surely just a matter of time before the second goal came but with just over an hour gone, and the weather and conditions worsening with heavy rain, we seemed to stop playing.  Even so, it was a big shock when Orient, out of the blue, drew level. In a rare attack, a cross was cleared with a Colin Waldron header but only as far as Paul HARRIS who hammered an unstoppable shot past Alan Stevenson to level things. There were twenty minutes remaining for us to get a winner but we just didn’t seem to be able to lift things and then, with four minutes remaining, it got worse.  It was nothing more than a long clearance. It was flicked on by Ian Bowyer and it found Gerry QUEEN unmarked in the box and he blasted his shot past Stevenson. We couldn’t find an equaliser and the unbeaten run was over. Burnley’s best ever start to a season had come to an end in a game whose result was a rank injustice.

It was all too much for manager Adamson and he sent out Joe Brown, his assistant, to speak after the game. Joe said: “You show your quality by how you get over a defeat like this. The mood of the players is that now they will start another unbeaten run.”

He added: “The players are obviously bitterly disappointed to lose the record after a match like this, but this defeat is not the end of the world. We shall come back. How we do so will be a test of character. It would be wrong to say that the defeat has done us good. No one will be brought down to earth, because we are not that sort of team. A defeat like this happens to all teams. Nobody can go up and not be beaten at some time. Now it is our job to get back on the winning trail again.”

It was a strange week in the Second Division. QPR were the only team in the top ten to win which meant the defeat didn’t do too much damage. It did enable QPR to catch us on points but they remained behind us on goal average.

If it wasn’t good for the top teams then it definitely was for the bottom clubs. The bottom four at the start of the day all won. One of those four was Carlisle who beat Sunderland 4-3 at Brunton Park and I admit to taking note of the scorer of the winning goal – one Francis Stanley Ternent.

The cries were for the start of another unbeaten run. To do that we had to travel to the Goldstone Ground a week later to face Brighton. It would be my first ever visit there.