Having secured a fantastic win at Cardiff City on the previous Saturday, Burnley fell to a 3-0 defeat at Gillingham on the Tuesday which cost us a place in the Fourth Division top two.

There were real concerns for younger people in Burnley when a report showed disturbing figures that almost two hundred under the age of 25 were out of work. The report had been produced on behalf of the General Municipal Boilermakers’ and Allied Trades’ Unions with the figures compiled from the Department of Employment statistics. 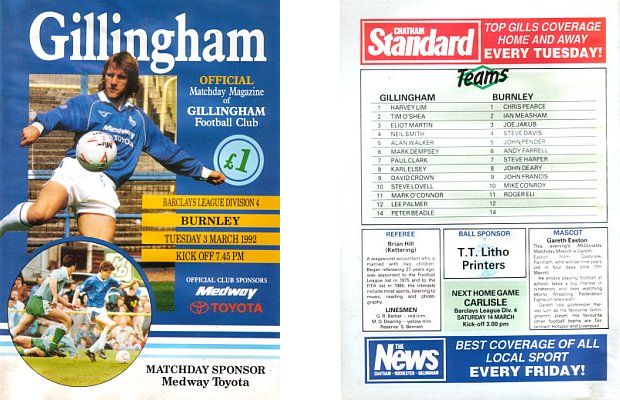 Mr Tom Fallows, branch secretary of the GMB, said: “These figures represent a totally unacceptable level of youth unemployment. This is the second time in ten years that a generation of young people have experienced life on the dole. The dole is no place for young people. They should either be in work or training. Unemployment can only lead to despair and hopelessness.”

Just days ago, we reported a fire that left a four-year-old in need of being grabbed to safety. Now it was a mum and her eleven year son in Derwent Avenue. Mum, Kay Pickles, had to jump from a bedroom window from which she sustained a broken ankle; son Jamie suffered from smoke inhalation but escaped by clambering down a drainpipe. Their next door neighbours called the fire brigade and it was reported that a 28-year-old was in custody helping with inquiries although charges were not imminent.

Another mum, aged just 21, was pushing her son in a pram when she came under attack from a man in the street. He pulled her coat hood over her face and then rifled through her coat pockets. When he found nothing, he sprayed her in the face with an unknown substance that caused no lasting damage. She was able to give the police a description and they were hopeful of finding the perpetrator.

There was news from two local churches in this week. It wasn’t good news at All Saints Church, Habergham (across from the George IV pub). Intruders had got in through a window and stolen the cross from the altar. The cross was over a century old. Over at Holy Trinity at the bottom of Accrington Road, there was better news. Although closed, and having suffered fire damage and vandalism, councillors were now considering an application to convert it into flats. If successful, the listed building would contain seventeen one-bedroomed flats and two two-bedroomed maisonettes.

If you accept an invitation to attend a theme night at a pub, be very careful if you choose to go dressed as a cowboy. One Burnley man, Joseph Cook, did and it landed him in hot water. He admitted an offence of affray after terrorising a taxi driver with an imitation gun.

His defence suggested he was just having fun but the court didn’t quite see it that way. Cook had said to the taxi driver: “Either you will die tonight or I will die tonight.” The taxi driver said he hadn’t taken it seriously but the court did. He was sentenced to a year in prison, suspended for a year, and was told he must pay court costs of £100.

One pair did go to prison. Their crime was to burgle an old age pensioner’s house on Christmas Eve. They were caught by an alert neighbour who saw them and took their car registration number. In court, they asked for four other offences to be taken into consideration. Despite one of them using heroin addiction as an excuse, they were both sent down for three years.

In the world of football, former Claret Ron Futcher turned up at the Turf to watch England Schoolboys face Wales. He was there watching his nephew Daniel Murphy, now thirty years later a Match of the Day pundit. The game ended 2-2 with one of the England goals scored by a Philip Neville.

As for the Clarets, we embarked on the long midweek trip to Kent to play Gillingham who were eleventh in the league, having won ten, drawn ten and lost ten of their thirty games. Even so, Jimmy Mullen predicted a difficult game. Before leaving Lancashire, he said: “We know it will be a very, very difficult game. Gillingham, as they proved against us last season, are a tough team to beat on their own pitch and we know that they won’t be making it easy for us.”

We went into the game on the back of a run of seven unbeaten league games since going down 5-2 at Blackpool but this was even tougher than Mullen expected and not only did the winning run come to an end but we lost top billing in the league.

It didn’t take Gillingham long to go in front. Anyone late through the turnstiles would have missed the opening goal. The ball was played back to home goalkeeper Harvey Limb from the kick off. He launched the ball forward for Peter Beadle to head into the path of David CROWN and he scored from around twelve yards out. The goal had come just eleven seconds after kick off.

We tried to get back into the game but Gillingham were constantly catching us offside from Nicky Walker’s long kicks but then we came into things. Adrian Randall went on a fifty yard run only to see his cross blocked and then Ian Measham went on a brilliant run down the right before slamming the ball home off the post, only to see referee Brian Hill astonishingly rule it out for an off the ball incident.

Having gone in a goal behind at half time, we came out and took the game to Gillingham and for the first quarter of an hour looked certain to at least draw level as we dominated. The goal didn’t come and then disaster struck with the home side scoring twice more in six minutes.

Crown played the ball out to Mark Dempsey, wide on the left. His deep cross found an unmarked BEADLE who headed home. It was all over six minutes later as goal number three went in. Mark O’Connor crossed for Steve LOVELL who crouched to head home. It could have been worse too but Walker made good saves from Neil Smith and O’Connor to keep it at three and then got away with it when he fumbled a shot from Alan Walker which fortunately rebounded straight back into his hands off the post.

It hadn’t been our night but there were still thirteen games to play and everything still to play for. Even down in third place, we’d have to go some to throw away this opportunity. We just had to put this defeat behind us and get back to winning games.

Wins for both Blackpool and Mansfield, who kicked off two points behind us were winners in home games against Hereford and Rotherham and now sat in the top two places, although we still had a game in hand against Mansfield and two games in hand against Blackpool.

The doom mongers were out and letting their voices be heard. “We won’t be going up now,” was their cry after we’d lost for the first time in eight games. We were still, crucially, eight points ahead of fourth place Crewe.