Villa have no answer as Burnley turn on the style

If Burnley had made a stuttering start to the 1972/73 season with draws against Carlisle and Fulham, then things certain more than picked up in the third game when we turned in a superb performance at home to beat one of the promotion favourites Aston Villa 4-1. 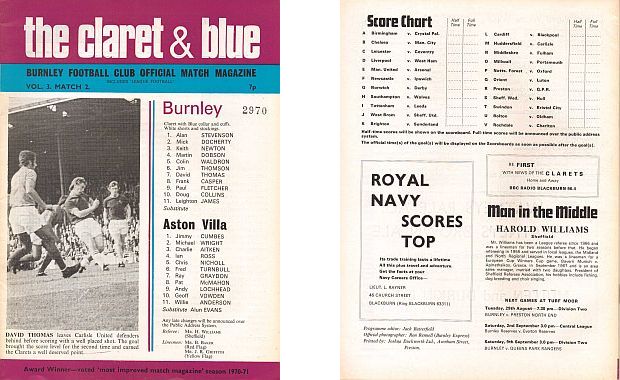 It hadn’t been a good week in town as news arrived of the sad death of Kingsman Rennie Layfield of Eastham Street while on active service in West Belfast, Burnley’s first victim of the troubles in Northern Ireland. Just before returning on his last leave, his aunt had begged him to leave the army where he served with the First Battalion of the King’s Regiment. He told her: “I’m a British soldier. I have to go back and if I get killed, I get killed.” He had, however, made the decision to leave the army to spend more time with his girlfriend in Kirkham who he’d met when based there. His stepfather had put up the money to buy him out and his death came just five days before he was due to leave the army for the last time. Hundreds lined the streets for his funeral as he was laid to rest with full military honours.

Times have changed from the early seventies where shopping is concerned, but in 1972 the Burnley Express was encouraging people to take time out shopping in different parts of the town rather than in the town centre. In this particular week it was all about the vast array of shops in the Fulledge area. So busy was it then that, for example, Lyndhurst Road housed three thriving greengrocers, two butchers, two newsagents and a variety of other shops. It was described as a full shopping experience with easy parking and a direct bus service from the town centre.

Back in the town centre, the old time music hall evening at the Keirby had proved to be a massive success with top of the bill Bernard Manning being the star of the show. The local newspaper printed, on its front page, a number of the jokes he told. In 2020 it would be deemed unacceptable to re-print them. Manning had enjoyed it: “The last time I came through Burnley centre it was shut,” he said. “You can tell how long that was ago, my team Manchester City had lost 3-0. Now, well it’s terrific, and this hotel is a really wonderful place. I have done cabaret in Burnley many times before, and I was expecting to be performing in a pub.”

It was well done to MP Dan Jones. He heard of Operation Lorraine, an appeal for stamps to enable 13-year-old Lorraine Robinson to enter a competition for blind people. Her dad had started the appeal along with work mates and the target was to collect over one million stamps. Dan helped to get it over that target by donating his worldwide collection of over 200 stamps. The prize Lorraine hoped to win was a night out with Roger Moore who had just become the new James Bond.

In local cricket, and having sacked Harold Rhodes, Burnley Cricket Club announced that former amateur Bob Entwistle would stand in as substitute professional for the remaining Sunday games but that they would be in the hands of the county for the remaining Saturday games. Lancashire sent Ken Snellgrove again and this time he had some great success. He bowled four overs as Nelson scored 178/5, and he took four of those five wickets for just twelve runs. He then enjoyed an unbroken partnership of 108 with captain Roland Harrison, scoring 90 as Burnley won easily by seven wickets. Lowerhouse travelled to Rawtenstall, but after restricting the hosts to 137/9, with professional Duncan Carter returning figures of 6/54, they were bowled out for 88.

But it was the football that had everyone talking as Burnley hit top form against an Aston Villa side who arrived at Turf Moor with a 100% record from the first two games and without having conceded a goal. Manager Jimmy Adamson named an unchanged side on the Thursday, two days ahead of the game, and warned: “Villa have got off to a flying start and are obviously playing with a lot of confidence and enthusiasm. This is going to be anything but an easy match for us. But we think we can win. We shall be looking to tighten up the defence at corner kicks and free kicks. In general play, the defence has been very sound but we have been giving away too many goals at dead ball kicks. We also need a bit more confidence in front of goal. We have been creating chances but not making sure of them. We realise just how important these next two matches are (Preston at home was to follow three days later) and we’ll be going flat out to win. Two wins will put us right up there.”

Adamson needn’t have worried. Burnley always had a reputation for turning in a poor performance when the crowd was bigger or when the television cameras turned up. Granada were there to screen this for their highlights programme and the attendance was around 50% up on the opening home game against Carlisle.

We turned in a performance that is still talked about today by those fortunate enough to have seen it. The football was of the highest quality and the goals in this game topped that. “In short, this was football at its best, and the outstanding feature was the goals, four real crackers from Burnley, not to mention a well taken effort from Villa,” Peter Higgs reported in the Burnley Express.

There were only three minutes gone when Burnley went in front. Leighton James, who had been a late doubt, received the ball from Dave Thomas in our own half. He went on a run, taking him past two defenders. He picked his moment, and played a delightful ball right into the path of Doug COLLINS who hammered the ball home from just inside the box.

It did no more than waken Villa and they really took the game to us with Ray Graydon and Ian ‘Chico’ Hamilton linking up well. They combined to set up former Claret Andy Lochhead who was close with a header and then, on the quarter hour they equalised. They deserved it too; they were looking every inch a top side, but it was a simple goal. Charlie Aitken got down the wing and crossed. Lochhead headed it down for HAMILTON to steer it home past Alan Stevenson.

For the next ten minutes or so, Villa threatened to take the game away from Burnley, but we hung in, finally got a grip back on the game and then hit them with two goals in four minutes. The first of them was a bit special. A Collins throw in reached Keith Newton who chipped the ball across. Martin Dobson headed it across the 18-yard line for Paul FLETCHER who hammered home on the volley from just outside the box. Four minutes later and DOBSON got himself on the scoresheet. Thomas and Frank Casper worked a short corner and the captain firmly headed home Thomas’ cross.

It was 3-1 at half time and if Villa thought they were going to get back into this game they were very much mistaken. The only surprise was that we only added one more goal. Dobson had what should have been his second ruled out because James was offside. Jim Cumbes, who later became chief executive of Lancashire County Cricket Club, made a string of fine saves, but there was nothing whatsoever he could do when the fourth went in with fourteen minutes remaining. It was a simple goal. Fletcher headed on a long clearance from Stevenson but there was still a lot to do as CASPER collected it. He moved forward and then smashed home from outside the box. It was a stunning strike and a fitting way to end the scoring.

The main entertainment after the goals came from the Villa fans who poured onto the pitch to try and get the game abandoned. Play was held up for over two minutes but thankfully resumed and ended with Burnley getting a wonderful ovation from their own fans. The disappointment of the two draws was forgotten. This was a special performance that had lifted us to sixth in the table.

“It’s a long time since I saw a match with four goals as good as the ones we got on Saturday” enthused Adamson. “When we  were a goal up, Villa took the initiative and came to us and they played very well, but we got the goals and it was a great boost to our confidence. The second half performance was better than the first but we did not cash in on the chances we created. Our defence must also take credit for this fine performance. They blotted out the Villa forward line and I can’t remember Alan Stevenson having a shot to save in the second half.”

The supporters had loved it and were hoping for the same again with Preston being our first midweek visitors of the season on the following Tuesday.

Sheffield Wednesday were also among the goals, beating Hull 4-2. They were still top, having played a game more. They had six points, with Portsmouth on five points, the only two with more points than us. Two players were leading the goalscorers. Brian Joicey (Sheffield Wednesday) and Willie Irvine (Brighton) both had four goals.