Burnley suffered a 1-0 defeat at Southend which left us with just one point from our first three league games and not a solitary goal scored.

Football is often put into perspective by events away from the game and that was very much the case in Burnley with two separate tragedies seeing a pensioner lose his life and a baby left fighting for hers. George Benson, aged 68, died in a mystery blaze at home in Chatburn Avenue. He was found by fire fighters sat on the sofa in his blazing front room. 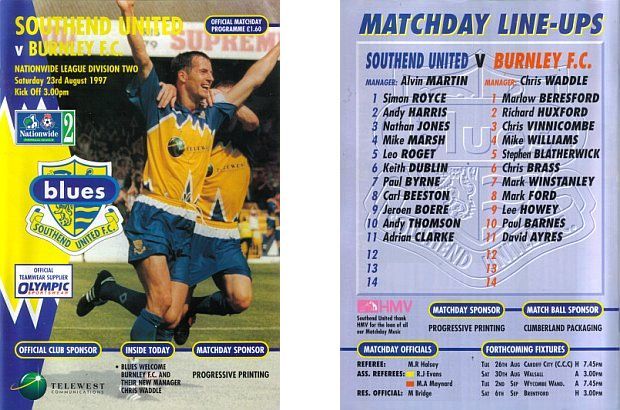 Fourteen month old Chantelle Ryan suffered horrific burns in a fire at her home in Abel Street and was described as being in a critical condition in hospital. Brave neighbour Peter Kelly did all he could to rescue her but couldn’t get to her. He said: “Walking up to the heat was like walking into a steel door. It just hit me and I couldn’t get through it.” Her distraught uncle said: “The only thing we can do now is wait and hope for the best.”

Judge Herbert Andrew QC told Burnley man Stephen Holding that he had a weakness of being attracted to young children and had used his victims for sexual gratification, that after jailing him for seven years for abusing five young girls. “These offences must be regarded as serious,” the judge said, adding: “You are a defendant who plainly has a weakness, if it can be so called, of being attracted to young children sexually. You were using these children to obtain sexual gratification.”

Burnley was set to get itself a new radio station with news confirmed that ‘Two Boroughs Radio’, to be known as 2BR, was to launch in the next month. Former Red Rose Radio DJ Dave Metcalfe would launch the new station with the Breakfast Show.

The town was put on alert when a local man convicted of murder escaped from prison with thoughts that he might return to Burnley. The man in question was Darren Jackson and he and another prisoner had broken through perimeter fencing at Ranby Prison near Nottingham.

He had been sentenced to life imprisonment in 1984 following the murder of Gillian Ellis and her parents were distraught on hearing the news. Her mum said: “He is an evil man. He deserved the death penalty for what he did to my daughter.”

DC Rhodes of Nottingham Police warned: “He is a very dangerous man and he should not be approached by any member of the public.” He was more reassuring when he added: “We have had numerous phone calls from both the public and the criminal fraternity. I am hopeful that we will catch him within a few days.”

For those who enjoy quality food, there was bad news for McDonalds who had been refused the purchase of land to open a drive-through restaurant in town. Their favoured position was on Trafalgar Street but had submitted bids for four different sites. The response from Economic and Property Committee Chairman Councillor Marcus Johnstone was: “The land has not been marketed and there is no intention of selling. The approach came from McDonalds in the same way that someone could say they wanted to buy the Town Hall.”

The council had issues on the roads too with reports that shoppers couldn’t find their way out of town. Councillor Stephen Large urged Burnley Borough Council to investigate the possibility of improving signs along the most popular routes.

This, like the McDonald’s issue, was in the hands of Councillor Johnstone. “This is quite clearly something we need to get right,” he said.

Whether he did or not, I was driving to Southend and managed to find my way out of town but ahead of the game we learned that players might be leaving the club. Peter Swan had gone to Bury and now Jamie Hoyland was potentially set to leave. Chris Waddle explained: “I told Jamie that I cannot guarantee him first team football but I made it clear I valued him as a squad player. I haven’t transfer listed him but if I get a realistic bid for him we will consider it.”

Burnley hadn’t scored in the first two league games but Waddle was certain that goals would come as soon as Paul Barnes and Andy Cooke started firing but it didn’t happen at Southend. For the third successive league game we failed to score and an early Southend goal gave them a 1-0 victory against us in a game ruined by referee Mark Halsey who awarded an incredible 37 free kicks for fouls during the game, taking every opportunity to stop the game from flowing.

Waddle opted for a back four in this game with both Chris Brass and Chris Vinnicombe left out but we turned in a very poor first half performance and went behind in only the sixth minute. Adrian Clarke breezed past Richard Huxford but when he worked the ball to Paul Williams, he made a mess of things. Fortunately for Southend, the ball spun out to Jeroen BOERE who hit the ball home from eight yards. Boere might have been a Burnley player too but was rejected by Jimmy Mullen after a trial when he was leaving West Ham.

We were second best but came close to drawing level but David Eyres saw his free kick come back off the bar with the home side able to clear.

The second half was much better and we could probably count ourselves very unfortunate not to have come home with something. Lady Luck wasn’t with us though. Mark Ford was becoming an influence now playing alongside Damian Matthew after Michael Williams was stretchered off just before half time.

Steve Blatherwick went close with a header following a corner and Matthew saw a free kick go narrowly wide. Simon Royce denied both Barnes and Cooke, Ford had a shot cleared off the line but we just couldn’t find that goal and the game ended in another 1-0 away defeat.

Ade Akinbiyi scored Gillingham’s second goal in their 2-1 home win against Walsall while John Gayle completed the turnaround for Northampton, scoring the winner after they’d gone behind against Bristol City.