The speculation was over, Burnley had found their man to replace departed manager Adrian Heath and that man was former England international Chris Waddle who was taking his first management role.

The 36-year-old had enjoyed a glittering career on the pitch. He started his professional career with Newcastle and had gone on to play for Spurs, Marseille, Sheffield Wednesday, Falkirk, Bradford City and Sunderland. He’d played 62 times for England too. 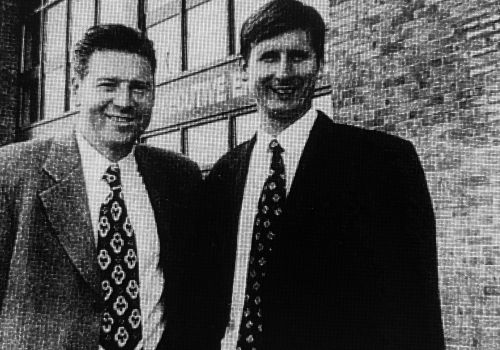 Having been introduced to the waiting journalists by chairman Frank Teasdale as Chris Hoddle, the new man had already started working with the players, had introduced a new training regime and suggested his team should be raring to go by the time the season kicked off.

The Burnley Express, through sports editor Edward Lee, reported that it was difficult to believe that Burnley Football Club could have made a more imaginative appointment, and to add to that we would also be getting a player of exceptional talent who was still more than capable of playing regularly.

To allow him to do that, he’d brought Glenn Roeder in as his assistant. Roeder already had significant management experience with Gillingham and Watford after a playing career that had seen him play for Orient, QPR, Notts County, Newcastle, Watford, Leyton Orient and Guillingham. He was also part of Glenn Hoddle’s England set up.

Having been introduced, a delighted Waddle said: “I have loved the game of football from a very young age and I have always followed Burnley’s fortunes. I have always marvelled at the way Burnley has attracted mass support. I think Burnley is a big club in a false division. The stadium is magnificent and could hold its own in the Premier League. I turned down the chance to move to places like Hull City, West Brom and Walsall, but Burnley is the right move for me. I could not ask for a better place to start my (managerial) career.”

Roeder was delighted to be back working at club level. “It’s nice to have the chance to work day-to-day again. I’ve been waiting for the right opportunity to come along and this is it,” he said. “Neither Chris nor I ever played in the Second Division; we have already been here a day too long. What we want is winners. People who are just here for the wages won’t play a part in our plans. We have an exciting ride ahead of us and anyone who is not interested can get off at the next stop. Chris and I both have our sights firmly set on the First Division. We know we have to get there as soon as possible.”

The new manager was asked what money was available to him and he was quick to point out: “I didn’t come to Burnley because someone offered me a big fat cheque book. I want to see what we’ve already got and I’ll take things from there. I have my own ideas about how the game should be played. I don’t like the long-ball game and I want us to be able to go out there and play the best football in the division.”

Roeder added: “Our first step is to make sure that the boys are physically fit. Physical fitness has played a big part in football over the last few years and too many teams concede goals in the last ten minutes because they are not fit enough. We are determined that Burnley will not be one of those teams. Six pre-season games will be enough for us to work out who wants to be part of our plans and who doesn’t. Anyone who doesn’t like the way we operate doesn’t have to stay, but Chris and I are willing to give everyone the chance to prove they are up to it.”

The last words were from Waddle who told the press conference: “We know that the Premiership is a huge step, but we have got to look at getting into the First Division as soon as possible. Any of the current staff who are worried about their positions has just got to knock on my door. We don’t want to stay in this division for too long and that means we may have to make some tough decisions.”

The whole town was thrilled at the appointment and it was thought that by attracting Roeder, Waddle had got the icing to go on what looked like a very exciting cake.

Chairman Teasdale might not have known the new manager’s name but he’d certainly gained favour with Burnley fans with this appointment. It had left supporters counting down the days to the first game at Watford.