On Saturday, 5th May 1962 I left Wembley heartbroken after we’d lost in the FA Cup Final against arch rivals Tottenham Hotspur, but I have to admit I was so fortunate just to be there.

Tickets were at a premium and I had my mum to thank for mine. I’d become a Claret during the 1960/61 season and in August 1961 she’d suggested to my dad that I be bought my first season ticket given I was by then going to every home game. It was that season ticket which guaranteed me my trip to Wembley. 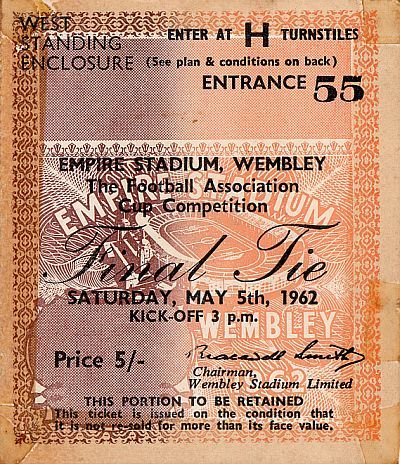 Was it around 15,000 tickets each competing club received for the game at the 100,000 capacity Wembley? One thing I do recall is the voucher system the club used once season ticket holders had claimed their  tickets. For one first team home game lettered vouchers were handed out at the pay turnstiles and a draw was subsequently held with the mayor pulling out the winning letters. Those with the correct lettered vouchers were then able to go and buy their cup final ticket. The only problem was that, in the days of no segregation, away supporters at that designated game also received vouchers and were therefore able to qualify for a ticket . We had, in our wisdom, chosen the home game against Blackburn Rovers.

My ticket was treasured; it still is, and I set off for London on the Friday night with it safely in my dad’s wallet. It was a car journey for us; not as though we ever owned one. I think the closest my dad ever came to driving was sat behind me as the worst back seat driver in the world. Thankfully his friend from work had a car. His name was Ken Yates and we travelled with Ken and his son Alan.

Alan was a few years older than me and he went on to take his support of the Clarets further than I was ever able to. A few years later, when going to away games was becoming part of my season on a more regular basis, I returned from one game only for my dad to tell me that Alan had made his debut for Burnley reserves on the Turf. It proved to be his first and last game at that level and he unfortunately scored an own goal in the very first minute.

I don’t think I’ve seen Alan since that debut but as our car went through Padiham on the long journey to London in 1962 we soon found plenty to talk about sat in the back of the car. Memories of all those years ago can often be sketchy but I do remember a huge ‘Good Luck Burnley’ banner at the top of Padiham and then seeing a car in front with a picture of Norman Vaughan with his thumbs up pose for his catchphrase ‘Swinging!’, all done tastefully in claret and blue of course.

I’m sure we slept for much of the journey that took us through various town and city centres in the days before bypasses and motorways, although there was one small stretch of a new road that we were able to use. I think they’d called it the M1.

Before that we chatted about the television programmes we’d watched before setting off that night. It included Coronation Street and Z Cars. Those who know me will know I’m still a fanatical Corrie fan and I think those at Goodison Park might be able to recall Z Cars. We also listened on the wireless (probably the Light Programme) to the number one song of the day which was the instrumental ‘Wonderful Land’ by the Shadows.

I’d been to just four away games previously, all during that season. I’d seen the league games at Blackburn and Blackpool and had travelled to Sheffield United and Aston Villa for the 6th round and semi-final of the FA Cup respectively. Ewood Park, Bloomfield Road, Bramall Lane along with its attached cricket ground, and Villa Park had hardly prepared me for what I saw when I arrived at Wembley around 10 o’clock on the Saturday morning. There they were, the iconic twin towers, and this vast stadium where my team was going to be playing in one of the biggest games in world football that afternoon. Having said that, world football to me then was our First Division and the FA Cup, although I had seen a couple of those foreign teams a year earlier, one from France and one from West Germany when we’d played in that new thing called the European Cup. Even so, as a 10-year-old I knew this was a big, big occasion.

We hadn’t been there long when a couple of very strange people walked past. Now, I’d been warned that London was a bit different to how things were in Burnley but who on earth were these people? I heard the words King and Queen mentioned but certainly the woman looked nothing like the lady who was scheduled to present the cup that afternoon. “They are Pearly Kings and Queens,” my dad told me. I’m still not sure what on earth they are but they parade around at big events in the capital all dressed up and they do raise a lot of money for charity. I have to say that it is probably a more palatable London tradition than jellied eels. 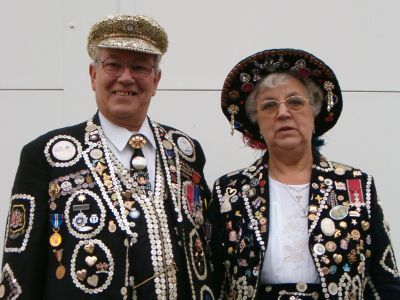 Once they’d gone on their way I can’t quite recall how we passed the time but as that time went on there were more and more of claret and blue flavour arriving. I can certainly remember the rush outside as the Burnley team coach arrived along Olympic Way. I waved and I’m sure it was Alex Elder who waved back. No wonder I reckon he’s the best left back I ever saw play.

Eventually it was time to go in. We made our way up the steps to the H turnstiles and then to our block number 55, placed right in front of the Radio Times Scoreboard which already had the names BURNLEY and TOTTENHAM HOTSPUR displayed.

The players came out in their suits, had a walk round the pitch and then went back up the tunnel at the far end to make way for the marching band. Then it was time for more traditional FA Cup Final stuff as Arthur Caiger made his way out for the Community Singing.

We all joined in with ‘Pack Up Your Troubles in Your Old Kit Bag’ and the likes, although I do seem to recall the Spurs fans didn’t join in with ‘She’s a Lassie from Lancashire’, and at the appropriate time we all waved our Daily Express Song Sheets which had a Union Jack on the back. We were then all invited to join in with the singing of the Cup Final hymn ‘Abide With Me’ ahead of the teams emerging from the far end, Burnley resplendent in their blue track suits. Many of those traditions are long gone. Some will say for the better, some not, but to hear 100,000 people singing with some gusto is certainly a memory I’ll always retain.

Cup Final Day wasn’t just about the ninety minutes football back then but the football was still, undoubtedly, the most important ninety minutes of the day. We went into this ninety minutes having collapsed in the league when a second league title in three seasons had looked a certainty. Looking back, I’m sure had we gone to Wembley as champions then we’d have emulated the double won by Spurs a year earlier. Unfortunately it wasn’t to be and we were only level for a few minutes in the entire game.

Jimmy Greaves opened the scoring within three minutes and that’s how it remained at half time. Then came the magical moment. As long as I live I’ll recall Jimmy Robson scoring our equaliser down at the far end, pushing a shot through Bill Brown’s legs following a Gordon Harris centre. I remember turning round to see the man come out on the Radio Times Scoreboard to change our 0 to a 1, but no sooner had he done it than he was coming out again with a 2 for Tottenham as Bobby Smith scored within a minute.

There was to be no second comeback, just a disallowed goal that scorer Robson to this day believes was not offside, and then the final goal that clinched it for Tottenham as Tommy Cummings handled on the line. Why did referee Jim Finney ignore his linesman who was waving for a foul on Adam Blacklaw? He did ignore it, he pointed to the spot and Danny Blanchflower sent Adam the wrong way and the game was over at 3-1. 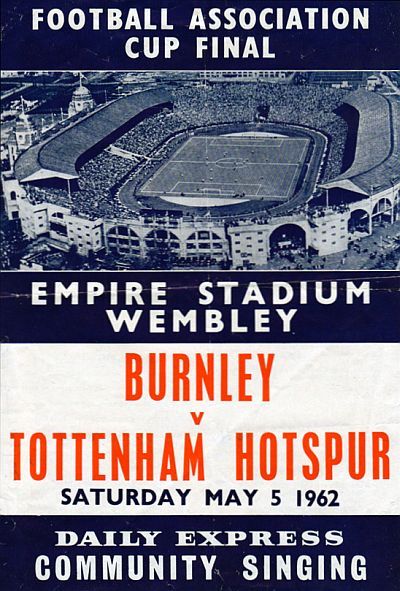 The Tottenham fans started to sing their anthem and the strains of ‘Glory, Glory Hallelujah’ could be heard around Wembley. Time was up for Burnley. This great team of ours had gone through the season without winning anything.

Tradition then sent the winners up to the Royal Box first. Burnley players had to stand and watch Blanchflower pick up the cup before we went up for our medals. Then, as was also tradition, the losers walked off as the winners went on a lap of honour before disappearing.

It was all over very quickly and it was all too much for me. I looked up as we turned to leave and saw the scoreboard showing ‘BURNLEY 1 TOTTENHAM HOTSPUR 3’. My auntie found us just as we were leaving and I was heartbroken. Nothing could stop me crying until my dad made me a promise that the next time we played in an FA Cup Final we’d win it.

Leaving the Wembley car parks was probably as bad then as it is now but I can’t really remember. Neither can I remember too much about the journey home. It was long, it was quiet, there was no mention of Corrie or coppers in Liverpool and it was definitely no Wonderful Land.

I remember stopping in Newcastle-under-Lyme on the way home but I’ve no idea of the time we got home. What I do know is my mum was waiting for me when I got through the door to tell me we’d done really well. Mind you, my mum knew nowt about football and she always felt sorry for the losers at the FA Cup Final. She’d have been daft  enough to have felt sorry for Spurs had we won. She told me the Queen looked nice, even having had to sit next to Bob Lord for half of the game who she said was, alongside his wife Hilda, very graceful in defeat.

My first Wembley expedition was over. My dad’s promise is still with me, and it’s not been proved wrong yet. The only thing is, I didn’t expect to still be waiting for that next final appearance some 58 years later.

My dad had been there in 1947 too but 1962 was his last visit to Wembley. He was too ill to go to the Sherpa Van Trophy Final in 1988 and passed away a year later, leaving me and the rest of our family to make the more recent big, important trips to Wembley and the play-off wins against Stockport County and Sheffield United. He was very much in my mind at both those games. I wish he’d have been there to see those big games, none more so than when we finally returned to play top flight football again in these recent years. His last game was a 6-0 win against York in the Fourth Division. He deserved better than Fourth Division level to bow out but he’d seen some great times before that and enjoyed all those wonderful years of the 1950s and 1960s following Burnley.

Me? I’m looking forward to our next FA Cup Final appearance. We’ll win it, my dad promised me.