We’re almost there after win at Huddersfield

Burnley took themselves to within one point of promotion with a 2-0 win at Huddersfield on this day in 1973 and set themselves up for a potential promotion winning night at Turf Moor on the following Monday when FA Cup finalists Sunderland were to be our opponents.

The week had brought two sad and unexpected deaths to Burnley people who were out of the country. One was 18-year-old Adrienne Finley who had been married for just eight weeks. Her and her husband had emigrated to America with her parents but both were involved in a car accident which killed Adrienne and left her husband with multiple injuries. 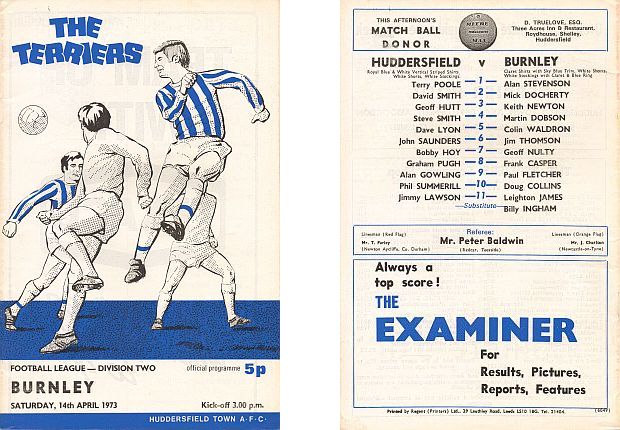 As that news came through, so did that of Albert Greaves who had just taken his first ever holiday abroad on his retirement. He and his second wife had gone on a Mediterranean cruise but he suffered a fatal heart attack on board. HIs wife decided to continue on the voyage to Gibraltar, Casablanca and Madeira but Mr Greaves, who left two children and two grandchildren along with a step son and three step grandchildren, was buried at sea.

The sit in at Vokes was over. Employees voted unanimously to return to work although 260 of them were to lose their jobs. Coronation Mill, the biggest of the two factories owned by Vokes was to close with the smaller Lodge Mill remaining open.

The Central Baths debate continued with teachers now hitting out at the lack of information being made available. Two ‘clear the air’ letters were sent. The first was from headmasters to the town council and the other from teachers to the Burnley Express who had, by now, taken the side of the council. Mr J. K. Helliwell, president of the National Union of Head Teachers, stressed: “At no time have we asked that Central Baths should be retained indefinitely. Our pleas have been directed towards the deferment of closure until the full situation regarding accommodation for classes can be seen.”

One local man was praised for chasing three youths, and catching one of them, when he heard the sound of glass being smashed. His girlfriend called the police as he gave chase and their actions resulted in a 17-year-old and two 16-year-olds appearing in court charged with criminal damage to two windows, valued at £12, at St. Augustine’s RC Primary School on Lowerhouse Lane. All three of them admitted the charge. The 17-year-old was fined £12 with the other two remitted to the Juvenile Panel for sentence. They all apologised for their actions.

Pendle Hill might not quite be the Swiss Alps but Switzerland came to Burnley with the opening of a new £14,000 Swiss Bar at the Keirby Hotel. The mayor, Councillor Abel Bridge, was invited to officially open the bar and he popped the first champagne cork. Why would Burnley want a Swiss bar? It was the idea of the hotel’s new manager Mr Eric Bluh who, although Austrian, was born within yards of the Swiss border.

Burnley, Colne and Nelson Joint Transport sent out the good news that there would be no price increase for at least a year. Despite passenger numbers dropping their profits had increased due to previous increases. General Manager Mr D. Chaplin said: “In view of the improving financial situation, we have already said it would not be necessary for us to seek a revision of fares this year, even with large scale wage awards.”

The council reported that people were refusing to take up tenancies in Burnley’s Trafalgar Flats because of the fear of gangsters, filth and obscenities. Alderman D. Newlove called for the introduction of police foot patrols for the flats and other areas of the town that suffered from similar hooliganism and it was agreed that senior officers should express the committee’s strongest feelings to the police on hooliganism.

Last week we reported the theft of a bottle of sherry from the Cabaret Club in Rosegrove. One of the youths responsible had just been released from borstal. it was his fourth offence in a week and he was sent straight back. The other youth, with no previous convictions, was fined a total £53.90 which is a high price for a bottle of sherry. Another recent report was that of three men having been found guilty of possessing cannabis. This was the occasion when the magistrates threatened to clear the court because of the behaviour of some in the public gallery. In a quieter session, the three were fined a total of £130.

Over 1,500 Burnley fans were expected at Leeds Road for our clash with Huddersfield Town. It was possible, although highly unlikely, that a win would see us clinch promotion. But for manager Jimmy Adamson, it was the title he wanted. “If we want the championship we have to win. It’s as simple as that. We know how important the game is to Huddersfield and we’ll be expecting a hard match.” We did our bit, winning 2-0 and Peter Higgs, in the Burnley Express, said we could chalk it down as another fine performance to match the many others from earlier in the season.

The win took us to within a point of the First Division with a performance that proved our indisputable right to be there. We did it despite suffering a blow after just 19 minutes. Mick Docherty went down injured with a badly twisted knee and was stretchered from the pitch. Billy Ingham, the substitute who could play just about anywhere, came on and filled in at right back and turned in a superb performance.

Huddersfield were, without doubt, in determined mood. They needed the points desperately at the other end of the table and some of their tackling was, at times, over robust. We had to match their determination, and did, and then had to show our extra class which we also did.

Burnley were so much on top right from the start that it was 16 minutes before Alan Stevenson even touched the ball. Leighton James, Doug Collins and Colin Waldron all went close but we couldn’t quite get the breakthrough before, in the closing minutes of the half, Huddersfield began to come into the game.

We needn’t have worried. We kept up the pressure in the second half and this time the goals came, the first of them just past the hour. Jim Thomson’s long pass was headed into the air by Martin Dobson who then turned quickly to lob it over a defender’s head. Frank CASPER provided the finishing touch with a 12-yard shot into the top corner.

And with a quarter of an hour to go the Burnley fans were well and truly celebrating a second, and a classic, goal. Ingham started it when, hemmed in on the right touchline, he made a neat square pass to Collins and then sprinted 30-yards down the touchline, took Collins’ inch perfect return and laid it first time across the penalty area where Paul FLETCHER hammered the ball home.

The estimate might have been 1,500 but In the end there were simply thousands of Burnley fans there and the reaction at the end between them and the players said it out loud – we were almost there.

Only QPR and Sunderland could pass us now while Aston Villa could mathematically catch us. Two days later Sunderland were at Turf Moor and we knew that one point would be enough to see us promoted back to the top division after two years in exile.

It had all left us with a special night to look forward to.