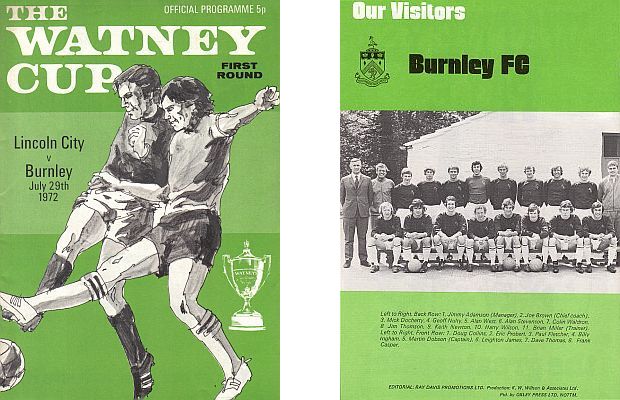 The Watney Cup was launched in 1970 as a pre-season competition. In 1972, the one occasion we qualified in the competition’s four years, it also featured Sheffield United, Wolverhampton Wanderers, Blackpool, Bristol Rovers, Notts County, Lincoln City and Peterborough United. The eight teams invited were the two teams who had led the goalscoring in their respective divisions in the previous season but had not, in the case of the First Division, qualified for Europe or, for the other three divisions, won promotion.

Manchester United were replaced having decided not to bother, probably because they’d suffer a defeat against Halifax in the competition a year earlier, but the rest did and, as it happens, Norwich and Birmingham, promoted from the Second Division, had both scored less goals than the 70 that both us and Blackpool had netted. So, I got my first trip to Sincil Bank and Burnley’s first visit since the FA Cup win during the Championship season of 1959/60.

If it had been hot and sunny a week earlier for the Swansea trip then this was a step up. It really was a scorcher and there was very much need for refreshments once the coach, Central Motors I would assume, had rolled into the cathedral city. One pub was packed with Burnley fans ahead of the game. It’s strange how you remember certain things from away trips but this was the one when some of our fans decided to put on a balloon show with those usually sold in machines in the pub gents. “You’d have thought they might have got claret and blue ones rather than all one bland colour,” said one young woman who travelled regularly on the away coaches while her friend pointed out that the appearance of them suggested they could have been blown up even further.

Ahead of the game, manager Jimmy Adamson said: “We know Lincoln are a hard side and they will obviously lift their game against us. The Watney Cup has proved a great competition for the smaller clubs. Colchester won it last year so we are under no illusions. But despite all this we are hoping to win and we believe we can do it. We want to win this cup. It would give us a great start to the season.”

The competition was important. Burnley had already pocketed a total of £4,000 for qualifying for the cup and could earn a further £2,000 by winning it, figures which sort of show how football has now changed over the years. Lincoln, however, were confident. They’d only just missed out on promotion from the Fourth Division and were looking for Watney Cup success to kick off a big promotion challenge.

Imps’ boss David Herd said: “We have more than 20 full time professionals, one of the largest pools in the Fourth Division, and our reserve strength is very good. We have ground advantage and we must feel confident of getting through, but we know they’ve a lot of good players at Burnley and we’re not expecting it to be easy.”

What Adamson and Herd might have been expecting, they certainly didn’t get. The two teams turned in a ninety minutes that was described by Peter Higgs in the Burnley Express as a grim ordeal. The only positive to come out of the game was that we won it 1-0 with a late, late winner from left winger Leighton James.

The first half saw, for the most part, the better football. Frank Casper, back in the side having been left out at Newport, twice came close, firstly heading over from a James cross and then hitting a shot that went just wide of the target. It wasn’t one way, and Lincoln had their moments. Burnley though looked strong defensively for the most part although Colin Waldron did clear one effort off the line.

We’d been the better side in the first half and the hopes were we’d go on and improve as the game went on in the heat. Nothing could have been further from the truth and Lincoln were much improved after the break. It’s happen as well we were defending well because by now we were offering precious little going forward. Things could have been worse too. Waldron fouled Percy Freeman and only a spectacular clearance from Keith Newton kept us level as Derek Trevis headed the free kick towards the top corner.

With twelve minutes remaining we were thankful to still be level at 0-0 but a forced substitution proved to be something of a turning point. Eric Probert had taken a knock during the first half. He’d done well to get to 78 minutes but was finally replaced by Alan West. West’s promptings changed things as Burnley finally started to get a grip on proceedings. Now it was the home side who were having to defend to stay level. John Kennedy saved superbly to deny Martin Dobson after a knock down from Paul Fletcher. Then Fletcher himself got his header wrong from the resulting corner.

The clock moved past 89 minutes with still no goals from these two regular goalscorers of the previous season, but then the game was decided. It all came from a long hopeful pass hit down our left wing by Waldron. Defender  George Peden looked favourite for the ball but failed to control it. That let JAMES in to rob him of the ball. The Clarets’ left winger took it on and slotted it past the goalkeeper into the bottom corner. Almost immediately it was nearly two as Taffy broke clear again, this time being brought down by Jack Kennedy who earned himself a booking from referee Norman Burtenshaw but 1-0 it was, and that meant a semi-final at home against Bristol Rovers.

Adamson said he was delighted. “We anticipated a difficult match and we certainly got a difficult match. I think we did well to get through,” he said. “They were the better side in the second half but did not take their chances. Their midfield players took control of the game and we did not play well after the interval. I thought Leighton James was the outstanding player on the field. He was a constant threat to the Lincoln defence and took his goal very well.”

The Burnley manager added: “I decided to bring on Alan West because things were going wrong for us in midfield. They were gaining control because Eric Probert was handicapped by the knock he got in the first half. Alan did well when he came on. He helped to lift the other players and pep up our game. I thought our back four played extremely well and I can’t think of an occasion in the second half when, despite all the pressure, Alan Stevenson had to make a difficult save.”

The teams at Lincoln were;

Burnley quickly revealed details for the Bristol Rovers semi-final game to be played on the Wednesday evening with a warning for season ticket holders that they would be required to pay as their season tickets did not include Watney Cup games.

They also announced that kick off, as usual for an evening game, would be 7:30 p.m.

Footnote: Burnley manager Jimmy Adamson turned down the England manager’s position in 1963 but the Lincoln side included a player in this game who did go on to manage England, and another who, almost a quarter of a century later, would become assistant manager at Burnley.

« Farewell to Hendrick Lennon and Hart
Contract extension for Mee »