Will the North Rise Again?

A review of ‘Northern Exposure’ by Tim Quelch.

Tim’s diaries were a mainstay of the London Clarets’ magazine Something to Write Home About back in the pre- and early-Internet days. We could always rely on them to provide vivid and insightful contexts to a season’s events.

These events would sometimes uncannily repeat, as with the loss of talismanic manager, Coyle, after a FA Cup Third Round tie in 2010, reminding older supporters, perhaps, of Jimmy Adamson’s departure in 1976 after a stormy Cup exit at Blackpool. The circumstances were different though for Coyle’s abrupt departure came after a narrow 2–1 win at Milton Keynes. Incidentally, Tim’s account of Adamson’s final game remains one of my favourites, capturing the wild day, the pre-match rituals, the crunching tackling, and the heart-sinking defeat.

Northern Exposure is Tim’s final book. As I read it I was reminded of his first, Forever & Ever, a compilation of Tim’s diaries and other material gleaned from earlier Something to Write Home About articles and match reports, provided by the first-wave London Clarets scribes like John McPartlin, John Trippier and Dave McCluggage. 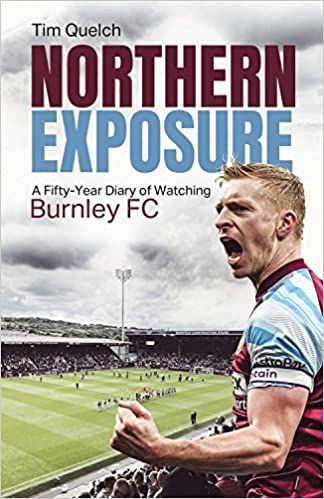 Whereas Forever & Ever was a dense, word-processed, home-cooked jambalaya of history, music and football, Northern Exposure is more personal and measured, consistent in tone, and thoughtful and intelligent, a considered reckoning of fifty years of experience, of both watching Burnley and of how football contextualises other important things in life: marriage, children, music, work and friendship.

Forever & Ever ended with Burnley’s promotion at Scunthorpe in May 2000, 22 years ago! Where’s all that time gone? So, there is plenty of uncovered ground for Northern Exposure to explore, before Jimmy Adamson’s demise, the fraught years that followed, the heady rise and cash-strapped fall of Stan Ternent to the undreamed-of heights of the Dyche era.

As Adamson’s ‘Team of the 70s’ threatened briefly to live up to its billing, Tim’s wife, Liz, became equally fanatical. When their car broke down on a Friday evening en route to West Ham, they are finally delivered back home at 3am. Undeterred, Liz dragged sleep-deprived Tim to Piccadilly Station the next morning for a London train. As if the calamities were an omen, Burnley lost and their title ambition faded. Tim and Liz hardly missed a game after completing their vocational training in 1973. But family care requirements compelled them to move south in 1978. Watching Burnley became confined to accessible away games.

However, in 1991 their daughter, Lydia, then ten years-old was initiated as a Burnley fan while her family were caring for a terminally ill relative in Leeds. These distressing circumstances prompted Lydia to ask Tim to take her to a game. It was a tough test standing on the Bee Hold End for a January 1991 fixture against Stockport County. But Lydia passed the test with flying colours as the Clarets robustly matched the physical challenge of Stockport to take a 3–1 second-half lead. Tim recalled:

As the sun sank beneath the western fells, the already chilly temperature plummeted. Once the floodlights replaced the fading sunlight, an icy sheen spread insidiously across the pitch. Lydia’s teeth started to chatter. I suggested that we should leave. She would not hear of it, determined to see the game through.

Lydia’s enthusiasm even survived a soaking during a Torquay game and a lamentable 1–0 loss at Maidstone later that season. Her devotion was sealed the following season when they travelled up from London to watch Jimmy Mullen’s newly-invigorated side go toe-to-toe with Mansfield Town at Turf Moor, the Clarets prevailing 3–2 in a game that Tim ranks as one of his favourites. Lydia celebrated by playing Nirvana’s Nevermind album on full blast all the way back to London, an indication of her good taste.

But it is the startling revival under Jimmy Mullen that shifts Tim back into his mid-70s groove. He and Lydia find themselves irresistibly drawn around the country to watch those attacking, early 90s Burnley teams, although their away form remained patchy. They endured some notorious defeats, such as the 1–4 mauling by already-relegated Exeter City at the end of the 1993/94 season.

Northern Exposure serves to highlight how the game has been transformed since Tim’s first visit to Turf Moor in March 1970. Take playing surfaces. Today it is expected that clubs can provide more or less unblemished surfaces all season, but for the first 25 years or so of Tim’s diaries, the state of the pitch was always a random variable to be either welcomed or – more often – lamented. Burnley’s playing style was often an attempt, at least, to play fast, skilful and attacking football, and some of Tim’s most effusive accounts are to be found in the early months of a season, when the better players could express themselves on smooth, firm surfaces. But once the pitches started to cut up in the late autumn, Tim finds himself employing a different set of verbs: powering, ploughing, churning, slogging – qualities that Burnley sides didn’t always possess in abundance.

The third period of sustained focus is the Stan Ternent era, and this is also where Northern Exposure picks up definitively from the final pages of Forever & Ever. One quite clear distinction between the two is the amount of first-hand material which is now available about the club’s modern history. For this we can thank two developments. The presence of local papers and radio and, importantly, the internet gave diarists like Tim access to the contemporary reactions of those involved in and around the club. We must also acknowledge the work of historians, notably Tony Scholes, Ray Simpson and Dave Thomas, whose relentless pursuit of stories about the club has placed a huge amount of information ‘on the record’ that would probably have not emerged otherwise.

This provides the last half of Northern Exposure with a more journalistic feel. With the football-watching experience now more regimented and uniform, the idiosyncrasies that pepper Tim’s diaries of the 70s and 80s have been organised out of the game. That said, there are still some tangents that stand out. Making a late decision to drive up to Stoke for the 4–1 victory late in Stan’s first season, he asks to borrow Liz’s swish work car, ‘accidentally’ giving her the impression that he’s just popping off for a local game. She phoned him at half-time to see where he is. Her response was explosive: “STOKE! For Christ’s sake! When are you going to be home?” He was fortunate that the road back south was clear. Still, it was well worth the earache to see Ally Pickering’s blistering long-range volley and then Glen Little’s mad, meandering, brilliant solo goal, and this after he had cheekily dragged the ball back into play from beyond the touchline.

It’s odd to relate, but the last sections of Northern Exposure deal with the club’s most successful period since the mid-70s, taking in the whole of the Dyche years and the return of European competition to Turf Moor, yet they left me wishing there was a bit more of Tim in there. However, this is at least partly redeemed by the book’s final few pages, in which he pens an essay entitled: ‘Will the North Rise Again?’ It’s one last, evocative look at the Dyche years in the context of the recent economic history of East Lancashire and the North of England more generally. Insightful, articulate, measured and revealing, it’s Tim at his compelling best.

Northern Exposure is published by Pitch and is available from the BFC club shop, Amazon and a variety of major retailers. All of Tim’s royalties will be donated to the ‘Asthma + Lung UK’ charity.