Williams added to under-23 squad

When Burnley drew against Norwich City in the final home game of last season in Premier League 2, we had a trialist at right-back who we understood to be Harry Williams from West Bromwich Albion. Today, we have confirmed that he has signed a one-year deal with the option of a further year. 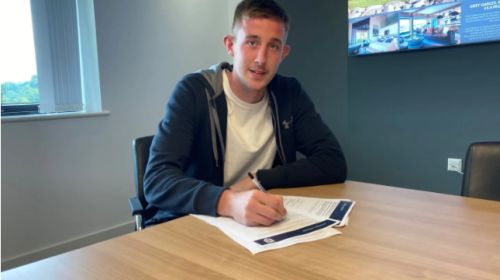 That game was part of a trial at Burnley with the player set to leave West Brom after six years in their academy. He reported for pre-season training last week and has joined the squad on the trip to Scotland.

Williams said of his time with West Brom: “I had a decent time there. I really enjoyed it. Last year I had an injury which put me back a little bit, so I didn’t get much game time. As soon as I came here I settled in really well with the lads. Steve Stone and Faz (Andy Farrell) were really welcoming and I liked it out on the field, how involved they were and giving me pointers all the time.

“The facilities here are brilliant, the staff helped me hit the ground running when I came in and I’m excited about the future. Coming off the back of last year, when I didn’t have much game time, I’ll be looking at getting those minutes in during pre-season and giving everything, improving in the gym, improving on the pitch and doing everything I can and see what opportunities come.”

Williams, who is 18, is the third new recruit this summer for the under-23s following on from Mark Helm and Jacob Bedeau. He said of his style of play: “I like to head it and like to be aggressive. I’ll give everything and the main job is to keep that ball out of the net, isn’t it? Looking at players in the first team, like James Tarkowski and Ben Mee, that’s what I aspire to really; tough centre-halves who are not nice to play against and put their body on the line.”