Last week saw us win our first ever meeting against Crawley Town to move into the fourth round of the League Cup and again it was our wide players who were on top of their game. 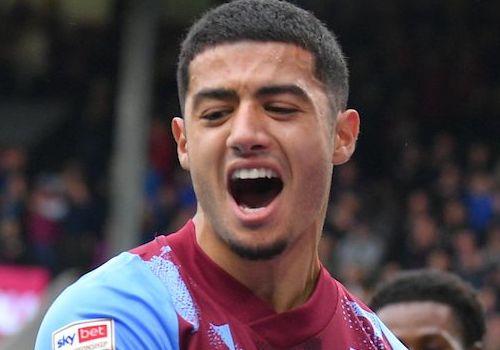 Manuel Benson was again the winner of both the man of the match and the player ratings although he had to share the latter with Anass Zaroury (pictured) in the ratings after he’d scored the two goals in the second half that secured the 3-1 victory.

Benson won his third consecutive man of the match, this time polling 47% of the vote. Zaroury, who came on just before the hour with the score at 1-1, was second with 19% while Ashley Barnes took third place with a 10% share. Matt Lowton, in at right-back, came fourth with 6% of the vote.

The wide players, Benson and Zaroury, both had player ratings of 7.64 out of ten to share top spot with Luke McNally, getting his first action in the first team other than two very late substitute appearances, coming third with a rating of exactly seven. Lowton secured a second fourth place with a rating of 6.93 out of ten.

That gives Benson ten points towards the Up the Clarets Player of the Year with Zaroury winning eight points. All of Barnes, Lowton and McNally won two points.

Benson has now moved within nineteen points of leader Jack Cork and Zaroury has now moved into third place, one point ahead of Josh Brownhill but 24 points behind Benson.

We are almost up to date and we will have the Blackburn result later today. The Crawley result and the table after that game can be found below.