Winning run ends and it’s a replay at Doncaster

Burnley had given Jimmy Mullen the best start of any Turf Moor manager with a run of eight consecutive victories but it came to an end when Doncaster earned themselves a 1-1 draw at Turf Moor in the first round of the FA Cup.

The headline news in town was that of the Padiham woman who had caused the death of four people on the M6 motorway. If you recall from last week she had pulled onto the hard shoulder because of a problem with her car, but then decided to drive to the emergency phone. Now, the court had been told exactly what happened. In pulling back into the inside lane she forced a lorry to jack-knife and into a car transporter which then smashed the car being driven by the 49-year-old Rev Samuel Gough, his 45-year-old wife Anne and their sons Stuart (16) and David (9). 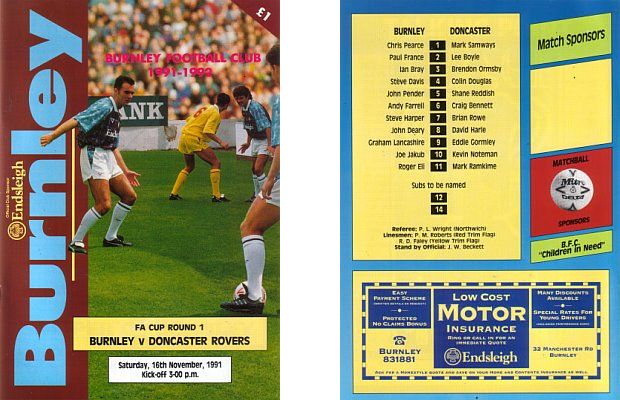 The jury of seven men and five women took only 50 minutes to find her guilty on all four counts of causing death by reckless driving. She was banned from driving for two years, forced to pay prosecution costs of £1,225 but the only other punishment was for her to carry out 120 hours of community service in old folks homes. Judge Elgan Edwards told her: “I’m treating you leniently. In helping the community you may salve your guilt.” The lady, who had pleaded not guilty to the charges, said she regretted it and offered her sympathy to the bereaved family.

If that was distressing news then there was some heart warming news for Edward Morville, the 82-year-old widower who had had his cockatiel stolen. The Burnley Express was inundated with offers of help in finding it, and offers to replace it from generous readers. Thankfully, the bird, named Peter, was found, still in its cage, in the back yard of a house. Mr Morville was overcome with joy. “I thought he had gone for good,” he said. “I think he is glad to be back. He is still a bit excited and nervous but he’ll settle down.”

If you asked a Burnley supporter what the letters BWFC stood for I’m sure he’d come up with a suitable answer. Those were the letters a man carved on a cell wall after he’d been held overnight after being found drunk and disorderly on a night out in Burnley. He appeared in court and was asked about the letters which he explained stood for BEER, WOMEN, FOOTBALL AND CURRY. He was fined £75 for being drunk and disorderly, a further £75 for criminal damage and the self confessed Bolton Wanderers fans was then told to go back to his Atherton home.

For those people trapped in traffic jams most days of the week on Colne’s North Valley Road there was some good news as plans to extend the M65 into Yorkshire to connect with the Airedale Motorway looked set to get the go ahead. Councillor Ken McGeorge said: “It really is the road to nowhere in the Colne direction. It makes sense to extend it into the Aire Valley where it was originally intended to go.”

Two more crimes that have been referred to in recent weeks were the murder of Kenneth Howard of Mizpah Street and the marital rape case. The rape case was finally dropped when both parties agreed they were getting back together but there was still no arrest for Kenneth’s murder with police admitting they had interviewed 960 people, made 500 house-to-house-enquiries, taken 499 statements and followed up 217 messages from the public. They said they were stepping things up and were determined to find the person responsible.

The man responsible for flashing to drinkers outside a Cog Lane pub had struck again. This time he was wearing a pair of tights over his head and nothing else when he flashed at three schoolgirls in the area. The police said it was a bitterly cold day and they had less to go on than previously.

Ahead of the big cup tie at Turf Moor (if Burnley v Doncaster can be considered a big cup tie), the Park View re-opened across from the ground after a major refurbishment. Oldest regular Mr Percy Hargreaves was invited to pull the first pint.

Jimmy Mullen had a major problem ahead of the game – who to play in goal. Brian Clough refused permission for Andy Marriott to play although there was good news for Burnley fans with the club thought to be close to agreeing a permanent deal for the Nottingham Forest goalkeeper. Chris Pearce and David Williams were both struggling, Pearce with a trapped nerve and David Williams having returned from his loan at Rochdale with a groin strain. That left 17-year-old Ian Walsh as the only fit goalkeeper but Pearce was given a run out with the reserves and came through well enough to return to the side for the first time since Marriott signed in August.

Other than that, it was the team that had beaten league leaders Mansfield a week earlier. Burnley were expected to win the tie, but we had to settle for a replay at Belle Vue, where earlier in the season we’d collected our first away points with a 4-1 win.

It was a game we should have won. Mark Samways, much the busier of the two goalkeepers, saved a penalty and three efforts that beat him were all hacked away by desperate defenders. Even so, this was not as good a performance from the team as they’d given in previous weeks. They were at times lacklustre and certainly didn’t have the spark and cutting edge that had been so evident during the run of wins.

The first half was all Burnley though and the Clarets must have wondered just how it was 0-0 at half time with three efforts off the line. Nothing much changed in the second half and with 11 minutes gone came the missed penalty from Mike Conroy. It was taken well enough but Samways guessed right to keep it out. Maybe there was some justice with the award somewhat harsh after Steve Harper went down in the box.

As often happens in a game like this, when the goal won’t come, it goes horribly wrong and that’s what happened on 64 minutes when Mark RANKINE got through, cut inside and drilled a shot past Pearce from just outside the penalty area. Thankfully the lead lasted no longer than 90 seconds. Burnley won a free kick out on the left touchline. It was taken by Joe Jakub and was met by Steve DAVIS who headed home.

For much of the remainder of the game it looked all Burnley, but then, right at the end, Doncaster broke with Rankine and Kevin Noteman against Pearce. It was the Burnley ‘keeper who came out on top as he rushed out of his box, won the ball and nonchalantly hacked it out of play. And so a replay at Doncaster, but before that we had to play them again at Turf Moor in the Auto Windscreen Trophy.

The teams for the FA Cup tie were;