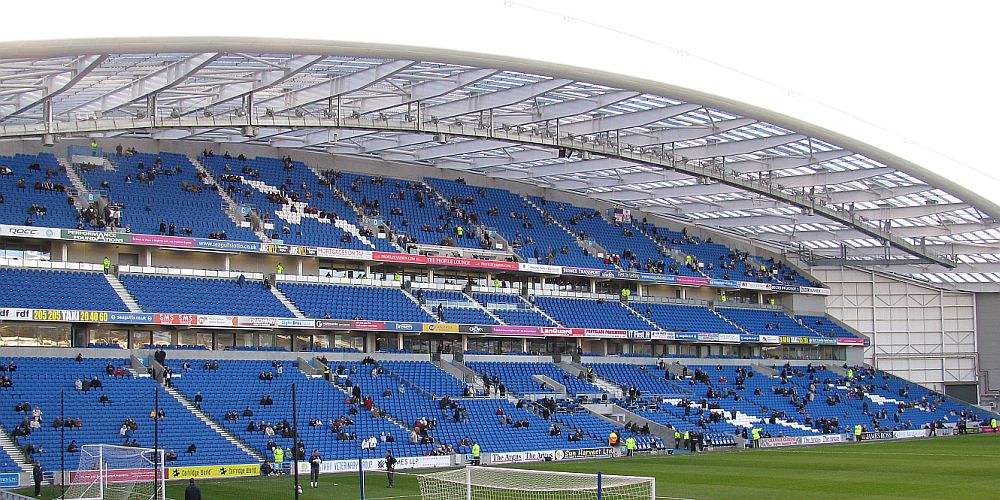 Burnley finally grabbed a first away win of the season yesterday with a 3-0 victory at Brighton that has lifted us off the bottom of the table.

A first Burnley goal for Wout Weghorst, a first in the Premier League for Josh Brownhill was followed by the icing on the cake when Aaron Lennon ensured victory twenty minutes from time on an afternoon when we were far and away the better of the two teams at a ground where we remain unbeaten in the Premier League.

It was no early start for me on this occasion. Unable to make the trip, and I have to admit to being devastated at the final whistle at not being there while punching the air with delight at the result, it was a matter of watching the game from home on television.

It seems we never have a full strength squad to select from. Charlie Taylor, Jόhann Berg Guðmundsson and Matěj Vydra remain out and added to that yesterday were James Tarkowski and Ashley Westwood who have both become Covid victims. Nathan Collins and Jack Cork came in with Dwight McNeil returning at the expense of Jay Rodriguez in the one other change. With no sign of Will Norris, it meant a place on the bench for the first time for goalkeeper Sam Waller.

Embed from Getty Images
We started well; very well and I spotted a post on the message board suggesting that you need a goal when you are on top. We were so close when Connor Roberts fired a left foot shot against the bar but then we did get one, and stand aside Maxwel Cornet, scorer of stunning goals, this one is well worthy of a place in any goal of the season vote. Lennon was the architect with a delightful reverse pass down the right hand side. Connor Roberts got onto the ball, past the full back and pulled it back low for Weghorst who scored superbly with a first time shot round the defender and into the net close to the right hand post.

It really was a superb goal. We were in front but not for the first time this season on the road; we’d previously led 1-0 at Everton, Leicester and Southampton, coming out of one with a 3-1 defeat and the other two with 2-2 draws. So there was no need to be too complacent.

In fact, Brighton did have a couple of good attacks close together. They got a shot on target with the first of them although it was a tame effort straight at Nick Pope. We couldn’t have known it at the time but it was their only on target effort all afternoon.

Almost immediately, Adam Lallana headed wide from a ball in from the right. It was comfortably wide of the goal and that, to a large extent, was just about as much as they threatened during the first half which turned even further our way five minutes before the break.

Embed from Getty Images
This one was not a goal of neat passing or great finishing but, as I always say, it counted one just as every other goal does. It started with a clearance from Erik Pieters with Weghorst getting the better of Shane Duffy. He flicked the ball to Brownhill to his right and the midfielder moved inside one defender before hitting his shot between two more. It got what looks like two deflections and my first thought was that Cornet was the last player to get a touch. It wasn’t; it was a defender and the goal was Brownhill’s. Two players scoring their first league goals for us in the same game. It doesn’t happen often and this was the first time since Vydra and Lennon scored the first two in a 4-0 win against Bournemouth in September 2018.

Duffy, a former Burnley loan player, was well beaten by Weghorst but it wasn’t the highlight of the first half for him. He’d been caught by his goalkeeper Robert Sánchez and didn’t take too kindly to it so give him a push. I’m not sure Kevin Friend saw it but some referees would have carded him for it and that would have left him in trouble later in the game.

That was it for the first half, in we went to the strains of Sussex by the Sea with a two goal lead and those among us whose glasses are half empty or worse would have had concerns as the second half got underway, knowing that it would be a tough forty-five minutes should Brighton get one back.

They obviously gave it a go, but it was half hearted in truth and not once did we really look under too much threat with their one decent effort coming when Neal Maupay shot wide. It left us for the first twenty to twenty five minutes of the half with us comfortably holding our two goal lead.

Embed from Getty Images
Then, two became three and another good goal. A Ben Mee header from just inside his own half found Weghorst out on the left. His first time flick moved the ball just inside to Jay Rodriguez, who was on as a substitute for Cornet. Lennon ran past him and received the ball on the edge of the D on the left hand side. He moved to the right, getting past Marc Cucurella before smashing a shot into the roof of the net right in front of the Burnley fans.

That was it, the game was over as a contest with twenty minutes still to play. After that, we saw McNeil have one shot saved and Jay tried a shot from fully 35-yards. It flew over but what a shame it didn’t go in and quiet the home crowd who still think it appropriate to verbally abuse him.

We thought goal number four had come when McNeil turned home  Brownhill cross with his right foot only for the flag to go up. The ball had hit the offside Weghorst on the way through but only after it had been played by a defender.

It didn’t count, and it remained at 3-0 but I’m not sure there is a Claret anywhere who is not rejoicing at that result and every bit as much the performance because if we are to get close to avoiding the drop this season we are going to have to turn in another few more performances like that between now and May.

Embed from Getty Images
At this point in a report, I’ll often report that we’ve had a good stop on the way home. Not this time, it was a home made chilli for tea before relaxing and getting ready for Match of the Day who even had the decency to show us third of the eight matches played.

Everyone continued to tell us though that the result seemed to be because Lewis Dunk and Adam Webster weren’t playing. For their information, we had Tarky and Taylor out. It’s not our fault that we obviously have better back up in defence than Brighton who were stuck with playing Duffy.

As for the return journey, in what were dreadful conditions, I just hope that everyone got home safely and in a timely fashion.

We’ve still a long way to go this season – let’s just keep getting behind our players and let’s hope this performance is the sign of things to come.