Four days earlier, a 2-1 win at York ensured Burnley would end the 1991/92 season as Fourth Division champions and it was now time to celebrate with the presentation of the trophy and, hopefully, a further victory in the final home game against Wrexham.

The town might have been celebrating on the Wednesday after the York game but there was a problem for anyone drinking in Sidewalk, across from the bus station, when a gun-toting man strolled in during the afternoon and threatened a customer with a single-barrel firearm. 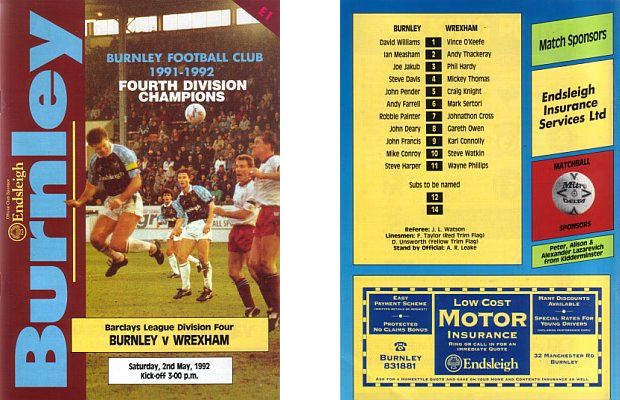 He then walked out, as calm as you like, long gone by time the police arrived. Detective Inspector Ron Griffiths said: “Inquiries are being carried out concerning the firearm and we are trying to trace the customer involved.” By Friday, a man was helping the police with their inquiries.

On the subject of pubs, but without any gunmen, two locals had switched beers having been taken over by Robinson’s brewery. The two pubs in question were the Wood Top in Accrington Road and the Coach and Horses in Church Street. The landladies at the two establishments were quick to point out that their regulars liked the new beers on offer but I can’t imagine they would have been too popular with their new bosses had they said otherwise.

Church Street was the scene of an argument between two men outside a pub with Mr David Howard, the aggressor landing himself in court for biting Mr Wayne White. His defence suggested the biting was no more than self defence but the court thought not and he was found guilty of malicious wounding which also included pulling Mr White’s hair and kicking him in the face. Chairman of the bench, Mr George Clarkson, warned him. “The biting has got to stop. If a dog had done this thing, we would have made an order to have it put down.” He was placed on probation for nine months.

Health Care Trust bosses were still celebrating the news that the new wing at Burnley General Hospital had been given the go ahead. It would be another five years before it would open but Mrs Maggie Aikman, the chief executive, said: “I am absolutely delighted that in the first year of the Trust our bid has been successful.” They claimed it would mean a much better service at the hospital with Mrs Aikman adding: “It means we can give improved levels of accommodation and high quality patient care, as well as a more efficient environment for our staff.”

It wasn’t just the hospital. Burnley Borough Council was set to become the only North East Lancashire authority to benefit from a Government scheme to provide extra help with recycling plans. The £80,000 would be used to set up new recycling centres within the borough.

It was a measure of their collective effort that the club’s three player of the year awards each went to a different player – Eli, Davis and Conroy – but Mullen was the main man. When he took over Burnley were in eleventh place.

The trophy was presented to John Pender and paraded to all and sundry. They had taken Burnley back to the top and they took them there in style. Only three other teams scored more league goals. More than that, they restored a sense of pride and achievement to a true footballing community.

It was time to build an extension to the trophy cabinet. Burnley fans had started the season with hopes, but they’d known high hopes to be dashed before; this season all their hopes came true.

It really is what a season of football is all about so for the big turn out of Burnley fans, to see the presentation and the parade was special. “This is the best match I’ve ever been on,” my six-year-old nephew said to me as the Burnley team came out ahead of the presentation and I suppose we could have all gone home happy without the game being played.

Some will say typical Burnley but having won the league, having had all the excitement of the week, we managed to lose this final home game and after taking the lead. It was all something of an anti-climax with what could only be described as a lacklustre performance.

It started well enough. Both Mike Conroy and Paul McKenzie, who was making his first start, hit shots straight at Wrexham goalkeeper Vince O’Keefe. It did look a matter of time before we went in front and the goal came just past the half hour. It was a simple goal too, one we’d seen so often during the season. John Francis got down the right and did so well to get into position to deliver the perfect cross for CONROY to head home.

Even into the second half, we were dominating the game but hardly threatening. Then, out of the blue, John PASKIN silenced the noisy home crowd with a 25-yard shot that beat David Williams. If Williams could have done better, he very definitely should have done later in the game.

By now, Burnley had just lost their way and a 1-1 draw looked likely. Wrexham had other ideas; Gareth OWEN won the ball in midfield, moved forward before hitting in a shot from over thirty yards out. Williams had the clearest of views, should have saved it but moved so late that the ball was in the net.

We did our utmost to get something from it, but it wasn’t to be, and we were beaten at home for only the third time all season and just the second since Mullen had become manager.

Rotherham, Blackpool and Mansfield went into the final day with hopes of joining Burnley in winning automatic promotion; Mansfield were two points behind the other two. But Mansfield were the only winners on the day, securing a 2-1 victory against Rochdale and they went up as did Rotherham who drew against Chesterfield. Blackpool, surprisingly beaten at Lincoln, were destined for the play-offs.

Rochdale’s defeat at Mansfield looked as though it could cost them too. Scunthorpe had qualified for the play-offs; Crewe had too provided Rochdale didn’t beat us by ten in the outstanding game. The last place was between Barnet and Rochdale with the latter needing to beat us to get into that seventh place.