It seemed Burnley could do nothing but win in 1991 as they followed up victories against Carlisle, Wrexham, Walsall, Lincoln and Halifax with a sixth consecutive league victory, this time a 3-1 win over York at Turf Moor.

Following on from the weekend news in town, a young man, Michael Shackleton, was charged with the murder of Frank Ashcroft, the 66-year-old who had tragically died of his injuries in Royal Preston Hospital. 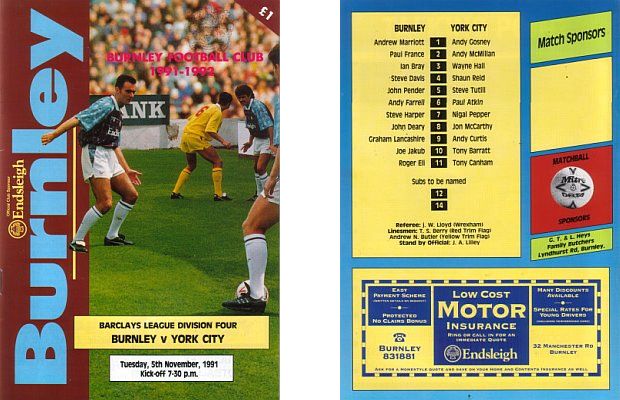 There was also more news of Kitty O’Shea’s Good Time Emporium owner David France. Having initially been granted an entertainment licence, it had then been temporarily revoked because the work on the former Hop in Trafalgar Street was incomplete. France said the plans were all in his head and his recent stay in hospital had put things back. When the licence was again approved he decided to put the record straight. He said: “There have been lots of rumours flying round. It’s been said that I’m some kind of gangster, and supposed to be a drugs baron or involved with protection, all of which I deny. I run a clean, good shop and it’s a perfectly reasonable place.” Kitty O’Shea’s may well have been but Mr France was almost allowing himself to be painted as Burnley’s version of a Kray with his unnecessary comments that, at the time, fuelled rather than quelled any rumours.

There were some interesting goings on in court when a Padiham man faced the magistrates for failure to pay fines of £188. It seems he had good reason for not paying; he’d been serving a four and a half month prison sentence. Clerk of the Justices Mr John Robinson told the court: “Something has gone wrong. He should have come out with a clean slate.” Chairman of the bench Mr Tom Pollard said they felt the most appropriate way to deal with this was to confine the man to the precincts of the court until 11:00 a.m. after which he was free to leave with the fines removed. Given that it was, by then, 10:59 it left Robinson to tell the man: “That means you must not leave for the next minute.” How about that for our legal system?

There was plenty of entertainment for local people at the time. There was the short trip to the cinema at Brierfield to see the film of the year, Robin Hood – Prince of Thieves starring Kevin Costner. If that wasn’t your cup of tea, there was always the Diz Dizley Jazz Quartet at the Mechanics or the wonderfully named Smart Ass, a fabulous four piece cover group, at Martholme Grange.

Appearing at the Higher Trapp were Eidelburger’s Oompah Band but for the real highlight it was Colne Municipal Hall with Len Barry, Chris Montez and Brian Hyland with his Itsy Bitsy Teeny Weeny Yellow Polka Dot Bikini. And if that wasn’t enough, the circus and the Russians were on their way, and that wasn’t the Moscow State Circus either. Gandey’s Circus was to show it’s animal spectacular on the old railway sidings at Rosegrove.

The Russians? Burnley Football Club confirmed they would be staging a Turf Moor friendly against Dinamo Stavropol on 26th November. We’d played them in the Soviet Union in pre-season and manager Jimmy Mullen said on announcing the game: “Playing against the Russians in three games in the last year has taught our players a lot about the continental style of play. This game will provide us with another chance of learning from a top class side and we are looking forward to it.”

Mullen was looking forward, but former Claret Jimmy McIlroy, writing in the Burnley Express was looking back when asked which of the two goalkeepers, Colin McDonald and Adam Blacklaw, he rated the best. Jimmy said: “Adam had much longer than Mac to establish a reputation, which he did and which he fully deserved. But at the time of his terrible accident in Dublin playing for the Football League, Colin was firmly established in the England side. But for his broken leg, Gordon Banks would not have gained an international cap, at least until years later than he did, and, it must be said, Adam would have had to languish in Burnley reserves, probably, after time, asking for a transfer through frustration. He was an outstanding goalkeeper who pulled off countless brilliant saves, but Mac was a genius at making difficult saves look so easy. Need I say more?”

So it was York on a Turf Moor Tuesday night with Jimmy Mullen forced into one change from the side that had beaten Halifax three days earlier. Roger Eli, injured in that game, failed to recover and so Graham Lancashire got a start with Danny Sonner taking his place on the bench.

Burnley had, undoubtedly, found the winning habit and whilst not playing with as much authority as in previous games they were still too strong for York and were convincing and very deserving winners. Supporters were now turning up almost expecting to win and the team didn’t disappoint again.

York started the brighter of the two sides and won two early corners. It wasn’t to last and the game turned Burnley’s way in just the tenth minute. Lancashire won a free kick in the midfield and played it quickly to John Francis on the right wing. Francis, using all his pace, tore up the field before unleashing a shot from the edge of the area which was blocked. The ball rebounded to Mike CONROY who, despite claims for offside, slammed the ball home to put the Clarets in front.

It was just the start we wanted and 1-0 became 2-0 six minutes later. This one started with Paul France, who had a stormer at right back. He got the ball into the box for Conroy who headed down to Francis. His shot dropped loose for Lancashire who looked to have missed the chance but John DEARY came storming in to hammer home past the helpless Andy Gosney in the York goal.

Burnley just stormed forward looking for a third. Andy Farrell was just wide with a shot from distance and then brilliant play from Conroy and Lancashire almost set up Steve Harper. A big win looked on the cards but then, midway through the half, a real mix up between goalkeeper Andy Marriott and captain John Pender led to York reducing the arrears through their best player Jon McCARTHY. Despite this, we kept on going forward and York must have been relieved to hear the half time whistle with the score still at 2-1.

The second half never lived up to the excitement of the first half and with just a one goal lead there were some nerves inside the ground. When Francis had a header cleared off the line with ten minutes to go there were still concerns that York could come back. Three minutes later it was all over. Deary won the ball on the edge of the box and got in a superb cross to LANCASHIRE. The youngster made no mistake as he headed home past Gosney to ensure the points were ours.

The result kept the Clarets in third place.

After the weekend results, when none of the top six won which allowed us to move up, it was a midweek when the top teams did get good results. Rotherham, who surprisingly could only draw at Doncaster, were the only team in the top five not to win. Rochdale started in sixth place but they suffered only their second defeat of the season, and what a defeat. They went down 6-2 at Scunthorpe where the names Ian Helliwell and Graham Alexander could be found amongst the goalscorers.

Mansfield remained top, one point clear of Barnet. The leaders were set for a date at Turf Moor four days later. Something had to give. We’d won our last six games but Mansfield were coming on a run of seven successive away wins. A good game was in prospect.