The Under 18 Premier League got underway two days ago with what can only be described as a day of goals with no fewer than sixty-five scored in thirteen completed games and the young Clarets hitting the headlines with eight of them.

We reported our 8-3 win at Newcastle on Saturday evening, but this really was a remarkable result given Tony Philliskirk’s comments on the day before the game. Pre-season was all but cancelled due to some of the players testing positive for COVID and Philliskirk said: “It has been a really disappointing pre-season, we had so much planned and obviously we’ve not been able to do any of it.” 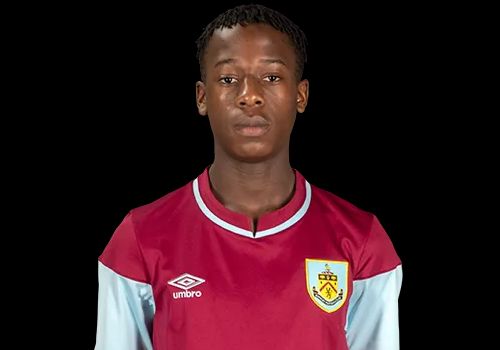 He added: “As a full group, we only started training last Monday, so come the first game of the season, we will have had two weeks of pre-season together. It has been difficult, but that’s the hand we’ve been dealt and it’s a case of now medically looking to see who can play. We are just so far behind, we haven’t had the lads on the grass so, preparation wise, we really are behind.”

I was probably expecting a big defeat having seen Philliskirk’s comments and we were behind at Newcastle too. Having gone 2-0 up we trailed 3-2 but the 8-3 win was the biggest of the weekend as Michael Mellon, Sean Etaluku (pictured) and Joe Smyth-Ferguson all scored twice with Tremaine Eastmond and George Walters also scoring.

Elsewhere in the north league, last season’s champions got off to a winning start, beating last season’s runners-up and local rivals Manchester United 3-0 while Liverpool scored five times in beating Stoke. On a day of no draws, there were also wins for Leeds and Wolves.

There is one outstanding game in the north with no result available for the game between Blackburn and Nottingham Forest although I have seen one comment that the game was abandoned with Blackburn leading 2-0. However, there has been no confirmation.

Arsenal and Chelsea were the highest scorers in the south. Arsenal beat Aston Villa 5-3 and Chelsea recording a 5-2 win against West Brom. Last season it was a battle between Fulham and Crystal Palace for the title with Fulham winning it on goal difference. Both recorded victories, Fulham beating Spurs and Palace winning at Leicester.

Brighton, Southampton and West Ham were the other winners in the south.

Last week’s results and this week’s fixtures are below along with our goalscorers. It’s too early to be showing the league tables but we are top on goal difference.