The 1967/68 season ended with Burnley in 14th place in the First Division, the second of four successive seasons when we finished in the same position, but this particular season is best remembered for the exploits of the youth team who, for the first and only time, brought the FA Youth Cup to Turf Moor.

We’d beaten Yorkshire Amateurs, both Manchester clubs, Sheffield United (team picture below) and Everton to reach the two legged final against Coventry. We lost the first leg 2-1 but two David Hartley goals gave us a 2-0 home win in the second leg to lift the trophy on a mud bath of a pitch on Friday, 10th May. 1968. 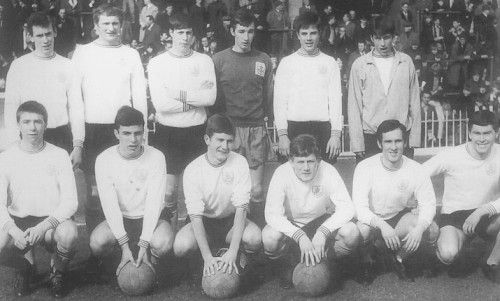 This article is not about that cup run though and neither is it about Hartley, one of only two of the regular eleven never to play in the first team, the other being goalkeeper Gerry McEvoy. Incredibly, the other nine all did play, albeit centre-forward Willie Brown did make just the one substitute appearance. The team in that second leg was: Gerry McEvoy (0), Peter Jones (2), Eddie Cliff (21), Mick Docherty (153), Wilf Wrigley (6), Alan West (45), David Hartley (0), Eric Probert (67), Willie Brown (1), Dave Thomas (157), Steve Kindon (185).

Those figures in brackets show the number of league appearances they went on to make for Burnley, nine players who played in the FA Youth Cup Final and went on to play in our first team, but if you begin to look at other finals, you can find another 27 participants with other clubs who went on to play first team football for Burnley, fifteen of those in the 21st Century. Docherty had captained the Burnley team but there are also four more captains to find as we look down the list.

It was our run to the 6th round this season that prompted me to go searching and it all started back in the 1950s, 1959 to be exact when our local rivals Blackburn beat West Ham 2-1 in the final. There was some outstanding talent in that final, particularly in terms of defenders. Blackburn fielded Mike England while on the opposite side was Bobby Moore. Geoff Hurst was a substitute for West Ham in that final but at full back for Blackburn was Keith Newton, probably the one player who, more than any other, can bring the two clubs together. Keith, an exceptional player himself, spent seven years at Burnley from 1972 to 1979 after which he retired from the game. He’d served both clubs so well either side of a spell at Everton.

We’d been beaten by Cardiff in the 1971 semi-final with the Welsh club beaten 2-0 on aggregate by Arsenal who added the Youth Cup to the first team double of league and FA Cup. In that Arsenal team was Kevin Kennerley. He joined us from Arsenal on a free transfer a year later and made just six first team appearances in the 1975/76 season before moving to Port Vale.

Kennerley was one of three from the 1970s with one of the other two playing a significant role some years later in a Burnley shirt. The other was Kevin Glendon who was in the Manchester City team beaten 2-0 by Millwall in 1979. There was one other Burnley connection in that team; Nicky Reid was physio at Burnley for a short time in the 1990s.

Two years earlier in 1977 the final had been won by Crystal Palace 1-0 against an Everton team who included Ray Deakin. He was a Burnley player during our first six years in the Fourth Division, made over 200 league appearances for us and, of course, captained the side in the Orient game in 1987.

The first of four players in the 1980s is not too well remembered at Burnley having played in just two League Cup games against Bury in 1998. The player in question is Tony Parks who was in the Spurs team beaten 2-1 by West Ham.

Embed from Getty Images
Louie Donowa had a disappointing loan at Burnley in the 1992/93 season but he was in the Norwich team that beat Everton 6-5 in the 1983 final, a final which needed a third game and in 1985 came another player who could hardly claim to have had a good Burnley career although he’ll be remembered as one of the finest England players of his era. Paul Gascoigne’s Newcastle beat Watford 4-1 in this final.

It was a Manchester derby a year later. City included the likes of Paul Lake, another future Burnley physio, Andy Hinchcliffe and Ian Brightwell, whose mum and dad, Robbie Brightwell and Ann Packer, both won Olympic medals in Tokyo in 1964. There were no players in the United team who went on to become stars but the team, beaten 2-0 by City, was captained by Steve Gardner, the central defender who joined the Clarets in the aftermath of the Orient game.

That takes us into the 1990s and John O’Kane. He joined Burnley in 1998 from Everton in what proved to be a poor loan spell, but in 1992 he was in the Manchester United team that beat Crystal Palace 6-3. There were a number of players alongside him who went on to make names for themselves, shall we say, namely Gary Neville, David Beckham, Nicky Butt and Ryan Giggs. I won’t bother to mention Robbie Savage who was a substitute. Jimmy Glass, who had a short loan at Burnley, was in goal for Palace but I’ve not included him given he never played a game for us.

O’Kane is the only one on the list to play in two finals. He was back a year later when they beat Leeds 4-1. Gardner, in 1986, had become the first future Burnley player to captain a team in the final since Docherty but opposing O’Kane for Leeds was Mark Ford who wore the captain’s arm band. Ford became one of Chris Waddle’s big pre-season signings for Burnley four years later.

There were two more in the 1990s and again they were playing for Manchester United and Leeds. David Johnson, who was on loan at Burnley from Nottingham Forest in 2002, was in the 1995 Manchester United team that beat Spurs in a penalty shoot out and in 1997 Leeds beat Crystal Palace 3-1 with Paul Robinson in goal.

There were future Burnley players in five successive finals from 2001 to 2005 with four in one team in 2003. Jon Walters was in the Blackburn team beaten 6-3 by Arsenal in 2001 and a year later Peter Whittingham, who so sadly passed away recently, played for Aston Villa in a 4-2 win against Everton.

Now we move on to 2003, a final that saw Manchester United beat Middlesbrough 3-1 on aggregate. The substitute goalkeeper for United in that final was Tom Heaton, who went on to enjoy six years at Burnley, four of them as captain. That United team was captained by his former Burnley team mate David Jones and also included current full back Phil Bardsley and Chris Eagles.

Embed from Getty Images
Gary Cahill was in the Villa team beaten 4-0 by Middlesbrough in 2004 and 2005 brought a final appearance for Nathan Dyer who was in the Southampton team beaten 3-2 by Ipswich. That Southampton team included current Premier League players David McGoldrick and Theo Walcott while their subs bench could boast such as Adam Lallana and Gareth Bale.

The Liverpool v Manchester City final in 2006 drew a blank in terms of future Clarets but the next three finals saw five more future Clarets line up. Both Richard Eckersley and Danny Drinkwater were in the Manchester United team beaten 4-3 by Liverpool in 2007. They made one league appearance between them for Burnley but the two who played in 2008 made more of an impact at Turf Moor, that’s for sure.

That 2008 final saw Manchester City beat Chelsea 4-2. Jacob Mellis, who once played a reserve team game for us on trial, was in the Chelsea team but lining up in defence for City were their captain Ben Mee alongside Kieran Trippier. Mee scored too, City’s first in a 3-1 home win which followed a 1-1 draw at Chelsea.

2009 saw Arsenal  beat Liverpool 6-2 in the final. How close was one of the winning team to becoming a Claret? They had Henri Lansbury in a line up that surprisingly included Jack Wilshere who must not have been injured at the time. Tom Heaton had been Sean Dyche’s first permanent signing for Burnley but his first signing for the club played for Liverpool in that game. That’s Alexander Kačaniklić. He scored Liverpool’s goal in the first leg 4-1 defeat at the Emirates and Dyche brought him in on loan from Fulham in March 2013.

Just two to go, one in 2011 and the other in 2012 and two players who joined us in loan on the same day in 2014. Michael Keane was in the Manchester United team that beat Sheffield United 6-3 in 2011 alongside Paul Pogba, Jesse Lingard, his twin brother Will and John Cofe who had left us back in 2007. Brother Will scored three of their six goals.

The most recent is Nathaniel Chalobah. He played for Chelsea in 2012. This was another year when we’d reached the semi-final before losing to Blackburn. Chelsea beat them 5-0 in this two legged final with Chalobah scoring the opening goal.

Chelsea have dominated the competition in recent years but it was Liverpool who won last season, beating Manchester City 5-3 on penalties after the tie had ended 1-1 on aggregate. I could suggest that we maybe take a look at those teams for the next player to potentially move from a final to our first team. Who knows? He might be with us now. Henri Ogunby featured in that final for City and is now a Burnley player.