Zaroury – The Heartbeat of the Sunderland win 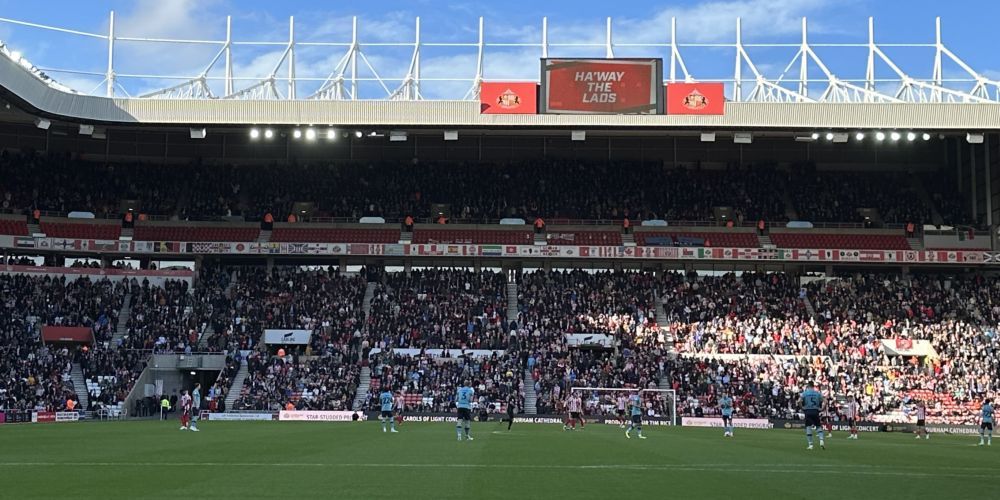 In a sensational second half, Burnley scored four times to turn a two goal half time deficit into a 4-2 win to give us our fourth away victory of the season while ending almost a fifty year wait for a league win on Wearside.

This was very much the story of a game of two halves. As poor as we’ve been all season in the first half, we turned everything round after the break with a performance that the home side struggled to cope with and deservedly came home with all three points having come from behind to win a game since two late goals from Jack Cork and Josh Brownhill gave us a 2-1 win at Watford in April.

I can report, that for us, this was a problem free day making the journey to and from Sunderland. It was the 9:20 a.m. train from Burnley Manchester Road, along with any number of other Burnley fans, but we switched to a car journey at Halifax and found ourselves parked up in the city around noon and off to a local hostelry for food and drink before making our way to the Colliery Tavern across from the ground, a must for me to see one of my best mates who just happens to be a Mackem. There will be more on him later. I have to say that Sunderland is among the most welcoming of places for away fans. None of the ‘HOME FANS ONLY’ signs around the place with away fans mixing with home fans just about everywhere.

It might be welcoming as a city, but not in terms of getting away supporters into their stadium. What chaos. I wanted, I could say needed, to use the lift to get up to the perch high up behind the goal. I was told by Mr Jobsworth that I needed a slip before they could allow me to use a lift but the problem was there were no slips. I’d been joined by two elderly supporters who travel with Boundary Clarets and thanks to the steward who got us into the lift despite the efforts of the first man at stopping us.

Embed from Getty Images
What I missed out on was even greater chaos at the turnstiles. As kick off approached, the queues were not moving. I’m told there weren’t an adequate number of turnstiles available and that the stewarding there was making things even worse. It was clear that a good number of our supporters missed the kick off.

We’d started having made two changes from the team that drew at Birmingham. Vincent Kompany had hinted at potentially resting both Jack Cork and Jay Rodriguez; he did just that with Jóhann Berg Guðmundsson and Ashley Barnes. I think it’s fair to say that things didn’t start well. We did have a half chance in the first minute but the only thing we got was a yellow card for JBG and for much of the first half we were downright shocking.

It wasn’t so much one area of the pitch; we were second best all over and to add to that we gifted Sunderland two goals in the space of four minutes. For the first, they got down their left far too easily and then worked the ball inside to Amad Diallo who had it easy when Arijanet Muric went down early and allowed him to pick his spot.

It was the first time we’d been behind in a game since 16th August when Hull went 1-0 up against us. On that occasion, Jay Rodriguez equalised within nine minutes with the game ending 1-1. This time there was no quick equaliser; it went worse with Sunderland adding a second four minutes later through Dan Neil, a player we were linked with last season.

Embed from Getty Images
If anything, this was even worse than the first goal. It was no more than a routine cross from the right. Connor Roberts headed it up in the air, they then got the better of Guðmundsson to allow Neil to get in the shot that went in at the near post.

The away end up in the Gods at the far end was stunned into silence. It was the first time we’d been two behind in a game since the final fixture of last season and worryingly there was no response once the game restarted some four minutes later. The referee, Tim Robinson, could be seen speaking to the two managers while Sunderland placed a message on the big screens regarding the throwing of missiles. I can, however, confirm that the stoppage was due to communication problems for the referee.

The rest of the first half was a difficult watch for us. It’s never good watching your team when they are a couple of goals behind, more so when there seems very little likelihood of a response and, predictably, we trooped in at half time 2-0 behind.

I was hugely disappointed with some Burnley fans who wanted to pin it all on Barnes, who was to be the player sacrificed before the start of the second half. He hadn’t played well, the blind man on Stan’s horse could see that, but we very definitely weren’t behind because of Barnes and he is deserving of so much more from Burnley fans.

Embed from Getty Images
Manuel Benson came on for Barnes. He played on the right with Nathan Tella moving into the centre and five minutes in we got ourselves back into the game when Tella headed home from close range after Taylor Harwood-Bellis had headed a Guðmundsson corner back into the danger area.

I watched 2-0 change to 2-1 on the big screen at the end where the goals had gone in and thought we might just have a chance if we could capitalise on this start, and capitalise we did. Just past the hour, Benson received the ball on the right hand side. He moved inside and then, from a few yards outside the penalty box, played a ball into the box that went straight in at the far post.

Maybe it wasn’t a shot, but this was the perfect ball into the box that both Roberts and Guðmundsson were so close to getting a touch on. It was a superb goal from Benson but it very definitely wasn’t going to win the goal of the day.

It was rocking now in the Gods and the travelling Burnley fans were ready to get themselves a new hero when we stunned the home fans in stadium by taking the lead. This was a stunner, an absolute stunner, from Anass Zaroury. Guðmundsson found him and he moved to the left hand corner of the box before unleashing a right foot shot that saw the ball fly into the far corner.

Embed from Getty Images
From that moment, almost to the end of the game, the new Zaroury chant, to the tune of the Heartbeat theme, was coming out of the away end. We had a goal of the season contender at Birmingham; this one is very definitely a contender.

There were still over twenty minutes to go and now, incredibly, we had a lead to defend. Sunderland had really threatened us just once in the second half and that was soon after the equaliser with Muric making a good save from Jack Clarke. I don’t think we were really threatened by them again and on 87 minutes, we got the icing for the cake.

Brownhill robbed a hesitant Sunderland defender and the ball ran to Benson. He played it back to Brownhill who took one touch with his left foot before hammering the ball home with his right. If they thought it was all over, it was now, it was four.

I’m not so sure much happened after that although there were five minutes to add on at the end. We did get to see Luke McNally who came on for Harwood-Bellis but the Burnley fans were just waiting for the final whistle while the Sunderland fans had, by this time, departed with only a handful remaining.

Embed from Getty Images
The final whistle signalled our first league win in Sunderland for almost fifty years since Paul Fletcher scored with a shot past Jim Montgomery on 2nd December 1972. That, of course, was at Roker; this was our very first win at the Stadium of Light.

The team and manager came over for a lengthy period at the end with Zaroury still getting the main attention from the fans. As good as Benson was, and he was, Zaroury was the man for me in that second half. Sunderland just couldn’t deal with him.

It was time to leave. I was asked if my Sunderland supporting mate would contact me. I suggested he wouldn’t. I said that I’d say well done if it were the other way round but he would now ignore me. To my surprise, he didn’t, I got a text message which read: “We had a decent first half. You had an outstanding second half. Fully deserved the win. NOW **** OFF AND DON’T TALK TO ME FOR A WEEK.”

The journey home was trouble free but we did have a quick stop on some services on the M1 on our way back to Halifax where we spotted none other than match referee Tim Robinson. He confirmed the reason for the first half stoppage. He also spoke about Zaroury’s goal and said he had the perfect view of it. It’s not often I’ve spoken to the match referee after a game; in fact that’s the first time other than on occasions offering abuse from the stands.

Embed from Getty Images
At around 3:20 p.m., I was wishing I’d not bothered going. In the end, it was a cracking day out and I can now add the Stadium of Light to the list of where I’ve seen us win games – that’s 102 now for league games alone.

All we need to do now is play full games in the way we played in that second half. It was superb.