Another late goal costs the Clarets at Cardiff 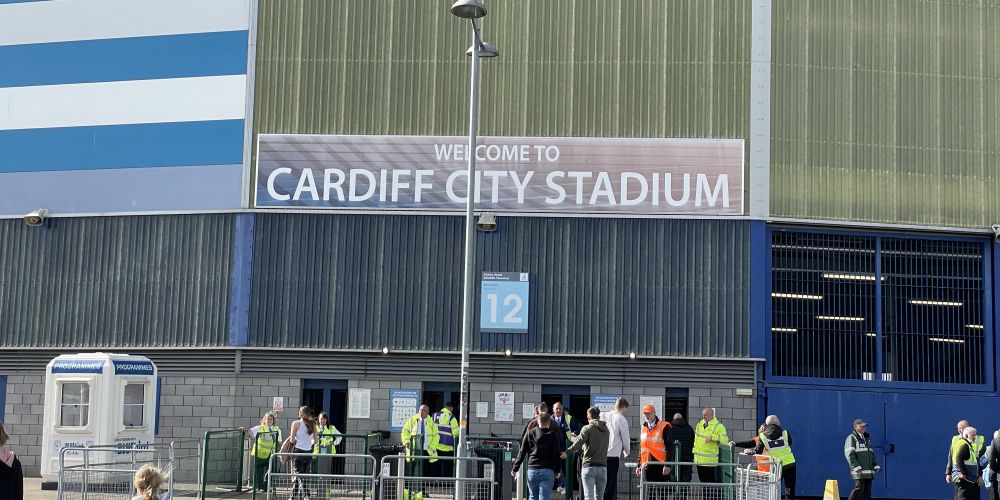 It was yet another bitter pill to swallow as two points disappeared yet again right at the end, this after Nathan Tella had given us the lead early in the second half, but we could have no complaints after what can only be described as a lacklustre performance from us.

Over a thousand of us made it to the Welsh capital and that was some achievement given the travel problems again. There were virtually no trains running and the supporters’ club coaches were booked up. It was only at the eleventh hour that I secured a lift and was able to get there. Despite the difficulties, I did chuckle when the club took to social media late yesterday morning recommending that fans should plan their journey in advance because of the disrupted railway services. Sound advice that, coming not much more than three hours before kick off.

By then we were already in Wales and were soon parked up and off to a local hostelry. We’d spent the morning considering what the team might be and had come to the conclusion that it mostly picks itself with decisions to be made in the centre of defence and on the right hand side. I did think that, if fit, Charlie Taylor would return. That was no reflection on Jordan Beyer at all; he’d done well, but Taylor’s performances this season have justified his place in the side. The right hand spot went to Jóhann Berg Guðmundsson who had set up the winner for Jay Rodriguez in the previous game against Bristol City.

Embed from Getty Images
Things didn’t start too well. Yes, we had the lion’s share of the possession but three times we let Cardiff in and I’m sure they will be wondering how they didn’t get themselves in front from one of those opportunities.

Despite having so much of the play, we were finding it very difficult to break them down and our only on target shot in the first half came from Josh Cullen. He maybe could have a shot in before that but opted to play the ball out to Nathan Tella but his effort from Tella’s return ball was comfortably saved by Cardiff goalkeeper Ryan Allsop.

Much of the first half was devoid of any entertaining football. Cardiff seemed to have the measure of us and rarely did we look as if we might create ourselves a real chance to go in front. When the half time whistle blew there were grumbles from the travelling support but with hope that we could step things up in the second half.

We did step things up and right from the kick off, mainly through Tella opting to run at his opponents. Almost from the start he got the better of Perry Ng as he stormed down the left touchline only for Ng to forearm smash him off the pitch, earning the Cardiff player a yellow card.

Embed from Getty Images
A few minutes later, in a similar move, he was fouled by Cédric Kipré. This one was a shocker, and I remain surprised that referee Gavin Ward, clearly not helped by his assistant, only saw it as a yellow.

Between those two incidents, Tella had given us the lead. This came down the right when JBG and Josh Brownhill linked up with Brownhill getting in a cross. The ball reached Ian Maatsen on the left hand side of the box and his ball back was turned in by Tella.

I really thought we had the beating of Cardiff at this stage. We were in front and better than they were and believed that one more goal would see us go on to win the game comfortably.

Just past the hour, we made our changes, three of them at once. I’ve been critical previously of being able to use up to five substitutes, and I have to admit being bemused when suddenly we opted to make three changes with all of Guðmundsson, Tella and Jay Rodriguez coming off. Manuel Benson, Anass Zamoury and Ashley Barnes replaced them and I don’t think either of them made much of a contribution with Zaroury looking way, way off it. At the time, I thought any change might have seen either Cullen or Brownhill replaced. Neither of them were playing well.

Embed from Getty Images
What happened was seeing us dropping deeper and allowing Cardiff to have more and more of the ball. I wouldn’t say they put us under too much pressure but they won a series of corners, some of them just unnecessarily given away. Any pressure was coming from ourselves and as a game moves towards its conclusion, it’s much better not to be pinned back when just one goal in front.

I was getting nervous. I always know that as I constantly keep an eye on the time and so we crept into the final minute of normal time. Then, the inevitable happened. We can point as many fingers as we like at a number of players but Cardiff’s 90th minute equaliser should have been avoided. After Maatsen headed the ball out, they got it back in with Callum Robinson heading home, getting in too easily ahead of Taylor Harwood-Bellis to head home.

Almost immediately, the board went up for six extra minutes but there was never any danger of us getting ourselves back in front and, to be honest, it was a relief when the final whistle blew at 1-1.

The record books will show that this was so similar to West Brom but on the pitch it wasn’t. West Brom played well against us and deserved their equaliser although we should have put the game to bed by the time they scored. This time, there were no further chances for Burnley; Tella’s goal was our last shot on goal.

Embed from Getty Images
There were some very disgruntled fans leaving the away end at the final whistle. It was not so much the two points dropped at the end, but the overall performance which was probably our worst of the season to date. Apart from those opening minutes of the second half, we rarely threatened a distinctively average Cardiff team.

There is no doubt that there will need to be an improvement this week with the games against Stoke and Coventry. The late goal didn’t cost us anything in terms of league position but we’ve had a reasonably easy start having played eight of our eleven games against teams in the bottom half of the table with two more to come this week.

I’ve had some bad days at Cardiff in the past. Even at their new stadium there was the 4-0 thrashing in 2012 and the horrendous League Cup defeat a year earlier. This, I’m afraid, was no better.