We are introducing a new feature within our Clarets History section, to take a look at the managers of Burnley Football Club over the years, and there’s is only one place to start and that’s with our first ever manager, Arthur Sutcliffe. 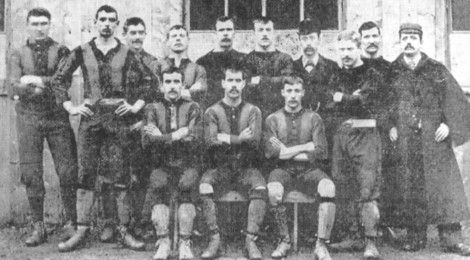 Burnley had moved through their early years, which included the first five years of league football, without anyone assuming the position of manager. The team had initially been selected by a committee before that responsibility had passed to the board of directors. Then in the summer of 1893 the directors elected to employ the club’s first team manager and the then secretary Arthur Sutcliffe was asked to combine his current duties with that of taking responsibility for the team.

Although he continued the tradition of bringing in players from Scotland, Sutcliffe was keen to see a Burnley side of local lads coming through the ranks and some of the leading lights of local football, such as Walter Place Junior and Joe Taylor were among his early signings.

His first season in charge saw us reach the top three at one stage, and of his first twelve home games in charge, all were won including a Christmas Day win against Sheffield United. By the end of the season we had slipped to fifth, but that was deemed a success being our highest finish since the introduction of the Football League.

A year later and we had slipped back to ninth after the manager was unable to hold on to influential players Peter Turnbull and goalkeeper Jack Hillman. They were both enticed into a move to Everton who it was suggested had flagrantly ignored the £10 signing on limit to ensure they got the Burnley duo. It meant he had to field a younger team, and a team including a lot of local lads, and it got even more difficult when James Crabtree, the local lad made good, who had gone on to play for England, was sold to Aston Villa in the summer of 1895.

Despite a poorer season that saw us fail to win in October, November and December, things did get better after the New Year and we lost only two more league games until the end of the season, a season that was brought to an end with a 6-0 demolition of local rivals Blackburn Rovers.

That summer brought to an end Arthur Sutcliffe’s time as Burnley manager after three seasons. Not a bad way to bow out though with a 6-0 victory over Blackburn.