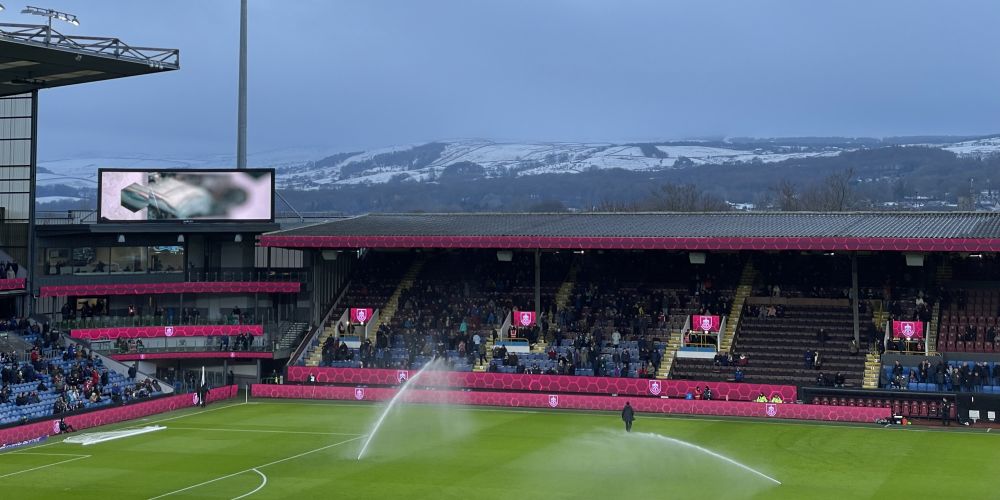 We’ve had such as Do They Know It’s Christmas, Merry Christmas Everyone, Merry Xmas Everybody and less festive titles such as Bohemian Rhapsody, I Will Always Love You, Always On My Mind and Don’t You Want Me.

They’ve all been number one at Christmas and, for the first time in nine years, so are the Clarets after yesterday’s 3-1 home win against Middlesbrough ensured we’d be at least three points clear of Sheffield United when the presents are opened and the turkey is served in a week’s time.

Given that Sheffield United are up against Wigan, it was always very likely that we would need a point yesterday to ensure top billing to go along with the King’s Christmas Message as the crackers are pulled. For a few minutes in the second half, there were some concerns when we fell a goal behind but a quick turnaround left the home fans in party mood once more as we took our points total to 47 at the half way stage of the season.

It was a cold, cold day at the Turf. Maybe not quite as cold as it was six days earlier at QPR but certainly more than cold enough as this seriously cold snap of weather was coming to an end. For two of the winning team from QPR, it was a cold free day. Vitinho was ruled out with a rib injury that we’ve learned will keep him out until into 2023, and Nathan Tella was ruled out having been ill for a few days. In came Connor Roberts, for his first action since returning from the World Cup, and Manuel Benson which saw Jóhann Berg Guðmundsson move over to the left.

Embed from Getty Images
Middlesbrough arrived unbeaten in the previous five games and were on a run of three successive wins, two of those on the road at Blackpool and Norwich, but they didn’t look like a side too encouraged to make it four wins on the bounce. With a more than cautious approach, they looked right from the off that they would be happy to get a 0-0 draw while hopefully being able to snatch a goal on the break.

To a large extent, coupled with some serious time wasting, that approach worked for much of the first half as we were reduced to very few opportunities in front of goal. The best fell to Guðmundsson. Played through by Ian Maatsen, he controlled the ball beautifully with his right foot but found Boro keeper Zack Steffen up to his shot with the American keeper saving at his near post.

JBG was involved in our other big chance too, getting down the left and finding Josh Brownhill, via a deflection, but Brownhill’s shot went over the bar. That came just after Middlesbrough had given us a warning when they could have caught us on the break only for them to make one bad pass that cost them.

It hadn’t been a first half to warm us up to be honest, but how things changed after the break, firstly with Middlesbrough going in front four minutes in through Duncan Watmore scoring having come on as a substitute at half time.

Embed from Getty Images
Back in July 2012, Watmore played against us for Altrincham in a pre-season friendly and turned in an impressive performance, so much so that Burnley fans there reckoned we should be signing him. He did move a year later but to Sunderland but suffered some horrific injuries there before moving to Middlesbrough in 2020.

Yesterday was the first time he’s played against us since that friendly over ten years ago and he won’t score many stranger goals than this one, his fifth this season. Jordan Beyer, who I thought had another outstanding game, headed the ball to Manuel Benson on the touchline right on the half way line. Quite what Benson was trying to do, I don’t know. He’d have been better letting it go out but he hooked it back and right into the path of Watmore who went through and pushed it past Arijanet Muric and into the net.

Turf Moor was knocked into silence and the temperature seemed to drop significantly with the 0-1 scoreline. We’d struggled to break down this Middlesbrough team and their approach at 0-0; it was going to be a lot more difficult at 0-1.

Benson likes to be in the game, he liked to be involved. Vincent Kompany joked after the game that he would be able to claim an assist for that goal, but Benson wasn’t finished with this game, far from it.

Embed from Getty Images
Middlesbrough had a big shout for a penalty. I’ve seen it since and it is outside the box but I’m not sure how referee David Webb gave nothing. Having said that, this is the referee I described as appalling when he supposedly took charge of our home game against Stoke earlier in the season. He was far, far worse yesterday when I didn’t think that was possible.

There was just about an hour gone when Beyer again found him out on the right, this time in a more attacking position. He did what Benson does. He ran at Ryan Giles and then went inside him and into the corner of the box before unleashing a shot. Not into the far top corner this time, but on the ground and at the near post. He wheeled away and held up his right hand to tell his team mates that he’d recovered his mistake. I was just relieved that at least we were level.

Did I suggest that Benson likes to be in the game? The equaliser kicked off a spell of total dominance from the Clarets. We had Middlesbrough under all sorts of pressure and they were struggling to cope. Josh Cullen was floored just outside the box with nothing given again by Webb, JBG and Jay Rodriguez both went close and then Middlesbrough just about managed to get the ball out of their box. We picked it up on the right with Brownhill, Benson and Cullen involved. Cullen played the ball out to Benson. This time there was no run forward. He just crossed the ball into the box. It bounced once before going straight in at the far corner.

Yes, it was a cross but when he scored similarly at Sunderland I wrote that it was the perfect ball into the box, almost begging someone to get a touch. It was the same yesterday; he might have been crossing but this was no fluke and he deserved his goal. We were in front and Benson had scored twice. I remain convinced that he scored twice in the defeat at Sheffield United but learned this week that the first was given as a Jack Robinson own goal even though the initial shot was on target. He’d definitely got his two in a game now and I thought it would be interesting to see how Middlesbrough played now a goal behind.

Embed from Getty Images
Five minutes later, their captain Jonny Howson scored but this was not 2-2. He headed a Brownhill corner into his own net and we were 3-1 in front. The scoring in this game was complete but the drama wasn’t.

Benson had made way for Ashley Barnes and then, with around three minutes of normal time remaining, we made a triple change. It gave Darko Churlinov a second home appearance having come on for Vitinho in the 3-3 draw against Blackpool while it was a home debut for Scott Twine.

Middlesbrough hadn’t been threatening but twice got balls into the box that Muric should have dealt with and didn’t. The confusion after the second of them came after he’d finally caught the ball. The referee saw nothing untoward; he actually got this one right initially, but then took advice from the equally inept assistant. He awarded a penalty and sent off Roberts for handling the ball on the line. As it happens, Roberts’ hand was up but nowhere near the ball which hit the bar. “Oh my God,” Roberts said before laughing, presumably believing someone would see sense. They didn’t; he had to go with a flee in his ear too from the arrogant assistant.

Suddenly we were facing hanging onto a potential one goal lead with ten men and as Chuba Akpom stepped up to take the spot kick, up went the board showing six extra minutes, most of it for the amount of time wasting by the Boro goalkeeper. Now it might be tough.

Embed from Getty Images
As it happens, Muric saved Akpom’s spot kick to his right and the dealt with Churlinov jumping on him. Surely it was won now. In fact, we nearly scored a fourth with Barnes going so close before Twine took centre stage. Twice he was fouled badly and then, just a few minutes after coming on, found himself substituted and replaced by Charlie Taylor with the manager confirming that it was a tactical change. Twine’s home debut hadn’t lasted much longer than Ade Akinbiyi’s Burnley debut back in 2005.

But what mattered was winning the game. We did so 3-1 and deservedly so against a Middlesbrough team who didn’t really come to play football and got exactly what they deserved, and that without Victor Valdez in their goal this time, their big summer signing in 2016 some would have you believe.

That’s nine wins in the last eleven league games. That’s 28 points out of 33 which is an astonishing return and, although I know the first 23 were back in 2015/16, we’ve now secured 102 points from our last 46 Championship games.

We’ve another game to play before that turkey goes into the oven, but it’s in the League Cup, and that is rare still being in that competition in December. What matters is the league and no matter what the result tomorrow between Sheffield United and Wigan, we are top of the league at Christmas.

Embed from Getty Images
It’s not often we’ve done that in my years of watching Burnley. The seasons I can recall are 1961/62, 1972/73, 1991/92 and 2001/02. In those seasons we finished second, first, first and seventh respectively so nothing is won yet. Back in the 1981/82 season, we were eighteenth at Christmas and won the league, but I’d much rather be top than chasing, that’s for sure.

For a while yesterday, it was frustrating, by the end it was another enjoyable day. Now let’s get this cup tie played and look forward to Christmas and the second half of this season. And PGMOL, if you wish to send me a Christmas present, please make sure it’s confirming that it will be a long, long time before we ever see David Webb referee another Burnley game.