Clarets fortunes turn for the better against the pub team

It’s Saturday, a third Saturday without a game because of the current halt in the Premier League, but we wouldn’t have been playing today in any case because of the international break.

It was the international break 21 years ago too and, on the 27th March 1999, England had beaten Poland 3-1 at Wembley in a European qualifier with a Paul Scholes hat trick. It was a decent enough looking England team whose only Burnley link was striker Andrew Cole who some nine years later was playing in a Burnley shirt.

The game was played on the Saturday afternoon so Burnley opted to move our home game against Macclesfield Town to Sunday lunchtime. Burnley v Macclesfield in a league game is a very unlikely prospect in the near future but then it was a vital game at the bottom of the Second Division, now League One. Macclesfield were just two points behind us but with a game in hand. Both of us, with Wycombe and Northampton, were in the relegation positions. 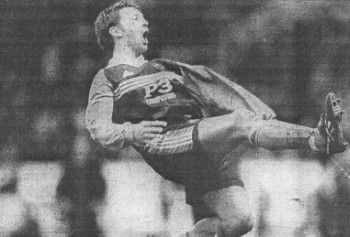 Our home form wasn’t good. We hadn’t won any of our previous nine games at the Turf. The previous victory had come via a somewhat fortuitous penalty against Blackpool that was converted by Andy Payton to give us a 1-0 win. That had been exactly four months previous to the Macclesfield game. That run had included a defeat against Northampton and then that big double when first Gillingham and then Manchester City came and beat us 5-0 and 6-0 respectively.

Stan Ternent, in his first season as manager, had made numerous signings during that baron run. Paul Crichton, Ally Pickering, Steve Davis, Graham Branch, Micky Mellon and Lenny Johnrose had all arrived to no avail but two more signings, Tom Cowan and Paul Cook, the latter on loan from Stockport, had made debuts in the previous home game which had ended in a somewhat undeserved 1-0 defeat against Preston.

It might have been a different looking Burnley line up too had Stan Ternent had more success in the transfer market. The deadline had just passed on the previous Thursday and we were trying to bring in three new players. All three of our targets did move that week but not to Burnley. Derek Lilley left Leeds for Bury while Preston snapped up the other two, firstly Paul McGregor from Nottingham Forest and then Luton full back Graham Alexander.

Struggling Wycombe had beaten Oldham 3-0 on the Saturday and Macclesfield was billed as a must win game. We went into it having drawn 1-1 at Wrexham a week earlier with a late Micky Mellon equaliser bringing with it our first point in five games.

This was never going to be a quiet afternoon. Incidents in the game at Moss Rose, played on a waterlogged pitch, involved an unsavoury incident when Andy Cooke was sent off for elbowing Macclesfield defender Efe Sodje. Much had been said about that after Macclesfield had taken all three points with a 2-1 win against us.

We had a quiet sort of opening to the game but that changed on nine minutes. Macc goalkeeper Ryan Price kicked long. Cowan got to it but made a real hash of trying to head the ball back to Crichton and it fell nicely for Kieron DURKIN who chipped the ball over the advancing Burnley goalkeeper.

Turf Moor fell into silence but Glen Little, whose only goal all season at come in the reverse fixture, missed a glorious chance to equalise before Cowan came close to making amends with a brilliant header that was cleared off the line.

It had been a terrific response from us but five minutes after that goal things went even worse. They just walked through our static defence although Chris Brass looked set to clear. He was beaten to the ball by John ASKEY who scored from close range.

“We’re down now,” could be heard all over the ground. Was this one going to be another five or six against us? That was the feeling. Burnley 0 Macclesfield 2 was so hard to take but thankfully their two goal advantage lasted for only three minutes.

It was a scrappy goal but who cared? Branch got down the left and crossed. Price failed to hold the ball and there was LITTLE to bundle it home off the post.

By half time we should have been level and could have been in front. Price was, by now, a bundle of nerves. Twice he carried the ball out of his own box, both times the offence was flagged but both times referee David Laws refused to give us the decision. Price did save from Cook. He then saw a Mellon effort go just wide and then was saved as a Cowan header hammered against his bar. Then the big chance. Branch was through one on one but shot tamely into the hands of the goalkeeper and so we went in at half time 2-1 behind.

After a quiet opening to the second half, a Payton shot went wide but it signalled a period when we laid siege on the Macclesfield goal. The first major incident of the game had been down to a bad mistake from Cowan but he’d been faultless since that. Two efforts in the first half could have brought him goals but just before the hour he lifted the roof off the place with a brilliant equaliser.

We won a corner taken by Mellon. It was headed back into the middle by Johnrose, who had just come on as a substitute, and COWAN stunned us all with a brilliant overhead kick that simply flew into the net. Once was not enough for Cowan, he ran towards the Bob Lord stand and then re-enacted his move (see picture above).

After that dreadful start, we’d been head and shoulders better than this shambles of a Macclesfield team but, incredibly, they were back in front before the cheers for Cowan’s goal had died down. A ball into the box was headed onto the bar with DURKAN volleying the rebound home for his second.

There was a bit of a fracas on by the dug outs at this point with Ternent clearly unhappy at Sammy McIlroy, the Macc boss, dancing down the touchline.

We had a fight on now but it was one we were determined to win, and win it we did. For the remaining half hour of the game we simply murdered them. Somehow they held us at bay until the 79th minute. Davis was trying to find Mellon with a ball forward but it wasn’t a good ball although Mellon did manage to get in a tackle that saw the ball loop up. It fell for PAYTON who was now up against the goalkeeper. He didn’t miss these chances and he calmly lobbed the ball over Price and it was 3-3.

They really had no answer to us now as the home crowd roared us forward at every opportunity. Little was simply destroying them down the right but we just couldn’t get that fourth goal. Then, into the final minute of normal time, DAVIS brilliantly got above Sodje to head home a Mellon corner. We’d won it.

At the final whistle, McIlroy had to run onto the pitch to get Sodje away as the situation started to look ugly and then followed a serious looking confrontation between the two managers.

The Burnley manager had the final word on all that. He said: “When we played at Macclesfield, Sodje, in my view, cheated and got Andy Cooke sent off. The incident was a roll on from that. The lads told him they were incensed and asked him how he felt.”

He added: “Sammy McIlroy accused me of calling them a pub team but I never said that, but I do think Sammy could have done something about Sodje at the time. We reported him to the PFA because he bragged that he got Cooke sent off, and players have long memories. But I shook hands with Sammy, I have no axe to grind, and he runs his club the way he sees fit.”

The win took us out of the bottom three and we’ve never been back there since. We didn’t lose again all season and ended in 15th place. Just over a year later and we were celebrating at Scunthorpe.

Wycombe survived too but Macclesfield went down with Northampton, York and Lincoln.