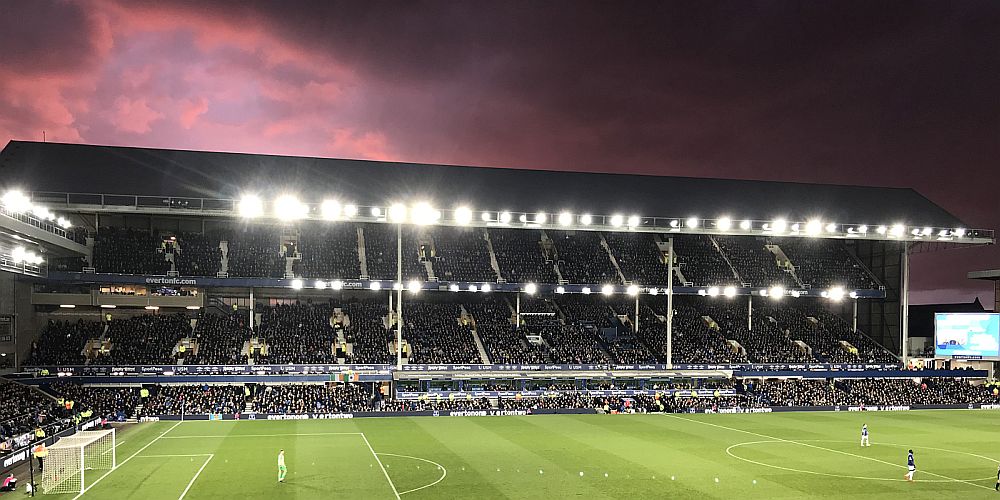 Last season it was 5-1 at home; yesterday it was 1-0 at Goodison Park. The games might not have been similar in any way but the end result was that we ended with a pointless Boxing Day at the hands of Everton for a second successive season.

There is no doubt that it was a horrible day a year ago but there wasn’t much joy around the away fans at the final whistle yesterday after a Dominic Calvert-Lewin goal ten minutes from the end condemned us to a defeat that was beginning to look very unlikely as Everton, particularly in the second half, were looking less and less threatening.

Unfortunately, one mistake from Dwight McNeil on our left gifted Everton the ball, the early cross was met by Calvert-Lewin whose diving header hit the left hand post before going almost across the line and into the net at the other end.

I don’t think Boxing Day has ever really been a good day for the Clarets and certainly not away from home where wins have been very rare, but after that late winner at Bournemouth I was confident we were going to get something as our car departed for Liverpool.

Our trip was via a supermarket to collect some food items for Fans Supporting Foodbanks which is a combined effort from supporters of both Everton and Liverpool. It has been in place now for over five years and what a fantastic effort it has been too from them. They’ve inspired supporters from all over the country to get involved and were a massive help to us at Burnley when we started this season.

Embed from Getty Images
We took contributions with us from Burnley FC Supporters Groups and West Yorkshire Clarets as well as Up the Clarets where we were met by Dave Kelly, the Evertonian, and his Liverpool counterpart Ian Byrne MP. While we were there, Vinnie O’Connor, the Sky news reporter, arrived with a contribution and shortly afterwards they were joined by Everton chairman Bill Kenwright.

Then it was into the Bullens Road lower tier where our view was an unobstructed one as we learned that Robbie Brady had taken the suspended Jeff Hendrick’s place. There was also a second change with Jay Rodriguez preferred to Ashley Barnes. Once again there was no place in the squad for Ben Gibson, although he’s expected to be fit for tomorrow’s visit of Manchester United. Matěj Vydra was missing again with Sean Dyche explaining that he’s been given time off after becoming a father.

Nothing much ever changes at Goodison although they have added the siren in the last couple of seasons prior to the teams coming out to Z Cars after which the home fans were able to welcome the arrival of new boss Carlo Ancelotti. From what I gleaned, they’d have happily welcomed any new manager, so keen were they to see the back of Marco Silva.

Within no time at all, we were the first team to come close when a free kick was headed back across goal by Ben Mee. It was met by Rodriguez on the other side of goal but Yerry Mina was able to head the ball from just under the bar and out for a corner which came to nothing. Probably our only other real opportunity in the first half came from another free kick on the right. This time Chris Wood got to it but could only head over the bar.

I think it is more than fair to say that Everton were the more progressive of the two teams but, in truth, they didn’t have too many opportunities although Nick Pope, England’s number 1 and playing against England’s number 2, did make two outstanding saves. The first was a superb reaction save to deny Mason Holgate from close range; the second he saved a Djibril Sidibé with his feet after which Phil Bardsley almost inadvertently turned the ball into his own goal.

Embed from Getty Images
Despite their domination of the ball, Everton couldn’t find a goal in the first half and so off we went for the break with the score at 0-0, as we had done in the previous two games. Could we then go on and win this one as we had those against Newcastle and Bournemouth?

Although they continued to have the lion’s share of the play in the second half, they were nothing like the threat they’d been before the break. To be fair, we hardly threatened, and probably our best effort was a Robbie Brady header that missed the target.

With the game looking more and more as though it would end goalless, Jordan Pickford, he is the England number 2 previously referred to, apparently carried the ball out of his penalty box on the left hand side. The assistant referee Scott Ledger flagged for the free kick but how on earth he could possible see from his position is totally beyond me.

Referee Anthony Taylor, who, to be fair, didn’t have a bad game, went with his assistant and gave the free kick although I’m not sure he was ever convinced and there are two big clues to suggest he wasn’t. Firstly, he took no action at all against Pickford, and when Ashley Westwood’s free kick came in, he blew for an Everton free kick although there is no sign whatsoever of any offence having taken place. They’ll deny it, but it is what referees do when they realise they might have made a mistake and they get the opportunity to quickly even it up.

By then we had made a couple of substitutions with Jόhann Berg Guðmundsson returning to action and then Barnes coming on. The two players to come off were Brady and Wood although I was amazed that the first change didn’t see McNeil come off. He’d had a difficult afternoon and unfortunately he gave the ball away that led to the game’s only goal.

Embed from Getty Images
Our response was to throw on Kevin Long up front, bringing him on for Jack Cork for the last few minutes. It didn’t work. We didn’t threaten and it was a 1-0 defeat this time when Taylor blew the final whistle which led to an ugly incident right in front of our fans involving Bardsley and some Everton players with substitute Tom Davies and Lucas Digne at the forefront. It was certainly a very angry looking Bardsley who eventually walked away.

And so, another Boxing Day defeat against the Toffees and we all had to troop out of Goodison as their other tradition of the playing of Grand Old Team was blasted out over the PA.

When that goal came, it wasn’t at all expected, and I reckon the Everton fans had began to accept a second successive home 0-0 draw. We hadn’t created anything like enough during the game but I thought we defended superbly. Both full backs played well, Pope did everything asked of him in goal and then there were the two central defenders who were simply outstanding again.

That’s it for 2019 on the road. It started at Huddersfield back in January and it’s a year that has seen us pick up 21 away points. Twelve of those came in the 2018/19 season recovering while this season we’ve already picked up nine from ten games.

We can unpack for a while now. The next three games are all at the Turf. We’ll be looking for some good points from the next two against Manchester United, the only team we are still to play this season, and Aston Villa. Then comes Peterborough. I dream of a cup run every year. One year I might not be hugely disappointed.

Embed from Getty Images
Finally, as 2020 approaches, a big thanks to all those I travel with to the away games, even those who preferred Worksop and Lanzarote to a trip to Everton yesterday, and even those who are trying to do a Jack Grealish lookalike. See you all next year.