It will be seven years at the end of the season since Lee Grant opted to leave us and return to his former club Derby County but, now aged 37, he’s just won himself a new deal in the Premier League with Manchester United. 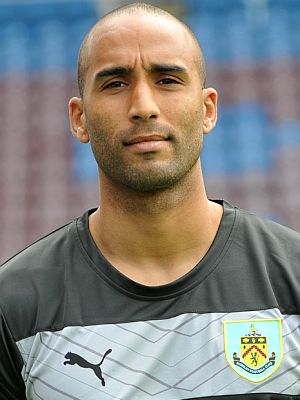 Grant, who made 115 league appearances for the Clarets, won the player of the year award in 2013 but chose to return home to his first club Derby at the end of his contract. He was an ever present in his first season back at Pride Park and virtually so in the next season, but 2015/16 saw him lose his place to Scott Carson.

That led to a move to Stoke, initially on loan, as cover for the injured Jack Butland and he went on to not just hold down his place but go on to win their player of the year award at the end of 2016/17. That didn’t keep him in the side however and after a season on the bench he moved to Manchester United as cover in the summer of 2018 and has now extended his stay by a further year until the end of next season.

Grant said on signing the deal: “I’m just looking forward to being part of next year and part of watching the football club grow and move forward, which for me, has been happening clearly over the last eighteen months anyway.

“But seeing those seeds that have been planted and getting the chance to hopefully see the fruits of that next year will be nice.”

He’s currently injured but did get his first, and only, start for United in a 2-1 away defeat against Astana in the Europa League back in November, but he’s now looking ahead to when his playing career comes to an end.

He’s currently working on obtaining his coaching badges and said of that: “I try to speak to the coaching staff as much as possible, for my own learning as much as anything. I get to see a lot of the hard work behind the scenes and all of us players are very much in touch with the amount of work that goes into what is given to us.”

Grant made his debut for Burnley against Leicester at home in a 1-0 win after coming in on loan to cover for Brian Jensen who had been sent off a week earlier at Luton. He kept a clean sheet in his final game too, a 2-0 home win against Ipswich in which he was substituted in stoppage time to allow Jensen to make a final, albeit a short, appearance for the club.