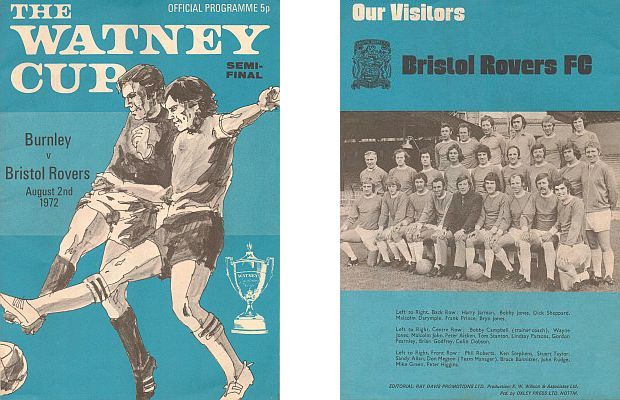 It was semi-final night at Turf Moor in 1972 as over 10,000 supporters arrived to see Burnley’s clash with Bristol Rovers in the Watney Cup.

We’d won at Lincoln four days earlier whilst Bristol Rovers had won through with a surprise 2-0 home win against Wolves. It was all to play for with Peterborough and Sheffield United meeting in the other semi-final.

Manager Jimmy Adamson was reminded of the previous occasion they’d been to Turf Moor. That was in an FA Cup 4th round replay in 1958, and on that occasion they caused a massive upset by beating us 3-2, twice coming from a goal behind after we’d been given the lead by Jimmy McIlroy and then Ray Pointer.

“I haven’t forgotten that game and it’s a lesson you learn from football, never take anything for granted,” he said, adding: “We aren’t taking this result as a foregone conclusion, but we must be favourites. We have home advantage and we must be expected to win. However, Bristol must have played well to beat Wolves and we’re expecting a hard match.”

Bristol Rovers were under new management with former Sheffield Wednesday full back Don Megson (dad of Gary) having taken over from Bill Dodgin Snr who had been manager for the previous three seasons.  It was Megson’s first managerial position and one he would hold for over five years. He’d caused something of a stir amongst Rovers fans and they were mightily impressed by the way his side had outplayed Wolves in the quarter-final. Bruce Bannister, from the penalty spot, and Kenny Stephens got the goals but man of the match was Welsh international midfielder Wayne Jones and he’d have to be watched closely.

Adamson named the same team that had started at Lincoln in the previous round with Eric Probert having been passed fit after being forced off with an injury in that game. We strode out looking quite strange in claret socks, but ready to put on a show in front of the television cameras with extended highlights to be shown that night.

Sadly, there was to be no final, as Bristol Rovers won the game 2-0 with the Clarets turning in the most forgettable of performances. There had been some real hope ahead of the game among supporters. The previous season had ended with those six wins, but, despite the promising results away from home in pre-season, this homecoming was a massive let down.

The first ten minutes of the game was good enough. We settled and put Rovers under some pressure and only a goal line clearance from Lindsay Parsons prevented a Leighton James corner from going straight in. Any hopes of a good show were soon dashed unfortunately and for much of the rest of the game we were second best to Bristol Rovers. They outrun us, they outfought us and they just simply outplayed us, although it is fair to say that we didn’t make it difficult for them.

We soon found ourselves on the back foot. They responded to that early scare by taking the game by the scruff of the neck and we’d already survived one scare of our own when Bristol Rovers took the lead. Bannister did well to control a through ball under pressure from Jim Thomson but he did well and then slipped the ball through for Frankie PRINCE who drove the ball home from just outside the penalty box.

We really struggled to get back into things with James our only real threat and could have fallen further behind when Bannister fired just wide and then Prince was only denied a second by a fine one-handed save from Alan Stevenson.

Things started to improve somewhat in the closing stages of the first half. Rick Sheppard saved well from James and Colin Waldron should have done better having been set up by Martin Dobson. Unable to get the goal we went in 1-0 behind and emerged for the second half with Alan West on for Probert. That change had paid dividends at Lincoln, but this time, with only three minutes of the second half played, Bristol Rovers doubled their advantage. Keith Newton and Waldron failed to clear the danger which left Stephens clear down the right flank. He opted to shoot but straight at Stevenson who could only parry his effort right into the path of BANNISTER who scored from close range.

The home fans were not happy. Slow hand claps were heard on all three sides of the ground (the then Brunshaw Road side of the ground had no stand at that time) and then, in the latest protest aimed at manager Adamson, came the chant of ‘We want Thomas’. Dave Thomas was a future England international but problems between him and Adamson continued to the extent that he was not being included anything like as often as he should.

With twenty minutes of the second half gone, Adamson made the change. We needed a winger, but instead of bringing on Thomas he blatantly stood up to the fans, with whom he had a very fragile relationship, and introduced debutant Paul Bradshaw. That prompted fans to stream away from the ground. Whether Thomas could have rescued this is very doubtful, but the young Bradshaw was never going to be able to influence things. It ended in a 2-0 win for Bristol Rovers, the fans were angry, but the club coffers had been boosted by £4,500 from a competition that was, in the words of the sponsors, to replace meaningless friendlies.

“Bristol deserved to win,” said Adamson. “They played very well. Things started to go wrong for us and we got very anxious. We did not string passes together and we could not get behind their defence. Their centre half, Taylor, played very well and made high balls to Paul Fletcher ineffective. This is usually one of our strong points, but in general everything went wrong. I hope we have now got this out of our system.”

He was questioned on his substitutions, particularly the introduction of Bradshaw rather than Thomas. He replied: “I decided to bring Alan West on at the start of the second half because I did not think we were creating enough from midfield. Paul Bradshaw had a brilliant game for the reserves at Netherfield the previous night and I thought this was a good time to blood him. He had a couple of runs but he can play much better than this. At least now he knows what first team football is all about.”

Out of the Watney Cup, it left us with a free date on the Saturday, and we quickly arranged a friendly at Bloomfield Road against Blackpool who had gone out of the same competition in the previous round.

It was Bristol Rovers who went on to lift the trophy. In front of 19,000 at Eastville they drew 0-0 against Sheffield United before winning the penalty shoot out 7-6.