What our new partners think of linking with the Clarets 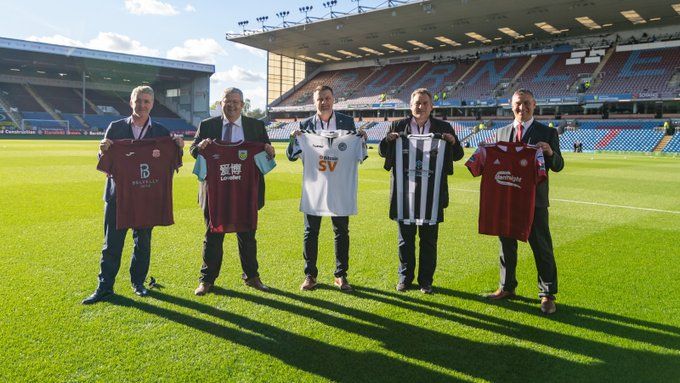 I got a bit of a shock yesterday when I saw a photograph showing five men holding up five football shirts on the Turf Moor pitch.

It wasn’t so easy to determine which clubs for of the shirts belonged to but the fifth, second from the left on the photo, was the Burnley shirt held up by our chief operating officer Matt Williams. For one brief moment I thought we’d made a signing.

The photograph was attached to a photograph revealing that our club has set up a British Isles partnership with four other clubs, one in each of Scotland, Wales, Northern Ireland and the Republic of Ireland. Those clubs are Ayr United, Llandudno, Portadown and Cobh Ramblers.

Intrigued, I read on and from what I’ve read it is a partnership that all five clubs feel will be of huge benefit to their respective clubs as we work together in both on and off pitch areas.

Matt said of the partnership: “While there are clear benefits to the football side of the club, I believe there will also be significant benefits both operationally and commercially for all sides. None of us are naïve enough to think we know it all, and I am sure we can learn from our partner clubs as much as they can learn from us.

“We wanted to partner with clubs we felt would fit with what we stand for. The four clubs are at the heart of their local communities, have a passionate fan base and have chairmen and directors who, like Alan Pace and his team, are ambitious and constantly looking to improve.

“We have developed a great understanding with Portadown in recent seasons and this is a natural step for us both and our relationship with Cobh can be traced back to 1921 when the Clarets were crowned League Champions, prompting the newly formed club in Ireland to wear the famous claret and blue. In addition they are currently managed by our former defender Stuart Ashton.

“Like ourselves Ayr have a relatively new chairman who has a real ambition to push the club forward and challenge for promotion to the SPL, while our friends at Llandudno are keen to implement a professional approach to their club and I couldn’t be more delighted to welcome all four teams on the journey with us.”

That’s the Burnley view of things but I wondered what the other four clubs might think of this. How positive are they that this is a potentially exciting partnership?

Chairman David Smith said: “This is a hugely exciting opportunity for our club and we are looking forward to the learning journey we have ahead through the Burnley Partnership. As a football club and a business we spend a lot of time bench-marking ourselves against our peers, pushing innovative ideas and generally keeping us moving in a positive direction. The chance to get close to a hugely successful club like Burnley is something we want to grab with both hands to learn what works and what doesn’t at their level and see what can work at ours.

“The positive pathways available to our young talent, the chance to enhance our own player resources, learning experiences for coaches/staff and all the other benefits around tournaments, friendlies and the community makes this a fabulous opportunity. Our U16s are eagerly looking forward to the Barnfield Festival on 22nd/23rd May and an experience like this will help shape and mould our future players.

“All the discussions with Burnley have been refreshingly aligned with our own Ayr United ethos and I’d like to thank Matt Williams and Alan Pace for the opportunity. The Burnley brand represents everything we respect in football and look forward to an exciting partnership with them, Cobh Ramblers, Portadown and Llandudno.

Chairman Andrew Croston said: “It’s a great opportunity to say our pathway has extended for academy talent and likewise Burnley youngsters can come and play in beautiful North Wales and have a great time.

“It’s a two year deal with an option to extend if it’s going well. A lot of further detail needs to be added, all the clubs involved are excited and all see it as a positive and it’s about building relationships with those clubs as well.”

Manager Matthew Tipton said: “We have to be clever in our thinking in terms of recruitment. We seen an Irish League market so condensed with 12 Premiership clubs and players moving around within the same sides, so we have to think outside of that.

“The benefits for Portadown by coming on board with Burnley will be massive, not just through the football side but the off field package in terms of shared resources, sports science and youth coaching education.

“I’m now full time as Portadown manager and want to drive the club forward to be the best it can be and get us back to what it has been in Irish League football. We had three tough years in the Championship but, now out of it and back in the top flight, can see small steps of progress on the pitch this season. Now, over the next number of years, we want to be really pushing the club back again into the top echelons of the Irish League.

“The link with Burnley has been something in the pipeline for a long time. Matt Williams, the Burnley chief operating officer, is someone I’ve known for over twenty years since my time at Oldham and we just always stayed in touch.

“In conversations we would talk about how the world is getting smaller in many ways and having connections between different clubs can only help everyone. That doesn’t mean Burnley will just stockpile our squad with players on loan but we would hope to get one or two.

“Also, other players might come on the radar for Burnley not quite ready for the club who could come over to us and benefit from the Irish League and first team level with Portadown. If we could get one or two nuggets that way too then it would be brilliant when players can benefit for a year or two here at a strong level.

“Building relationships with a Premier League club like Burnley can only help us progress, work for both clubs and something from which we can get a lot of success.

Chairman Bill O’Leary said: “This partnership with one of the founding members of the Football League in England is one we are particularly excited about. We, as a club, are ambitious and are positioning ourselves for growth and view this alliance as a key part of our strategy.

“Burnley are a club we admire greatly in terms of its ethos and performance both on and off the field, and there are learnings for us. Commercially and otherwise there are mutually beneficial opportunities which we can work on together in real demonstrable ways, and the
timing is appropriate for many reasons.

“Poignantly, as we celebrate our Centenary in 2022, we remember those who founded our club and modelled our colours on Burnley’s league winning side of 1920-21.

As a growing and ambitious football club, we here at Cobh Ramblers are very much looking forward to working with and learning from all at Burnley FC. We thank them for the support that they have given us in the early stages of our partnership and we look forward to a strong
sustainable, and rewarding relationship.

It all looks positive at the beginning and let’s hope that’s how it is viewed in years to come. It might also be useful for those who organise pre-seasons that I’ve not seen a game at the homes of any of these four clubs.