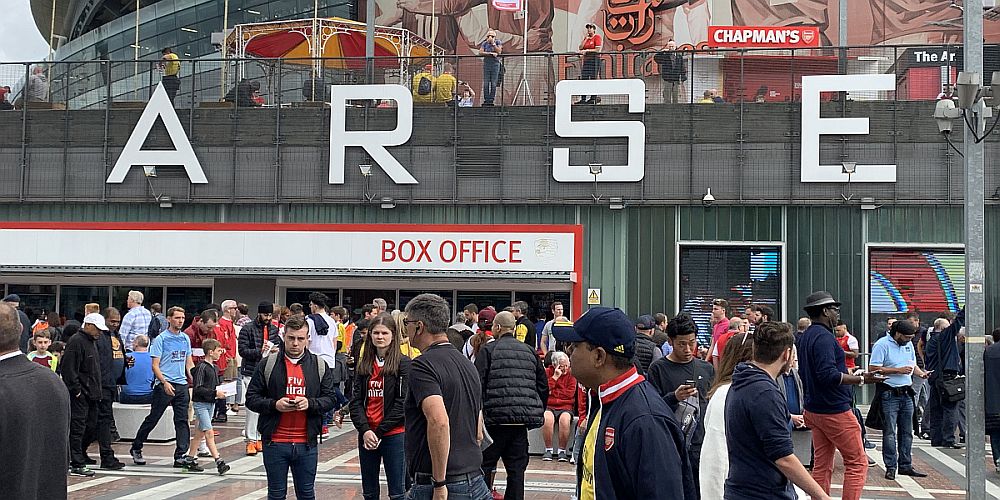 It’s finally happened, after a run of poor results against them, a number of them brought about by shocking refereeing decisions, we’ve finally beaten Arsenal in a Premier League game and in doing so have lifted ourselves out of the bottom three.

With the undisciplined clown Granit Xhaka already off the field, Arsenal should have been reduced to nine men just as Ashley Westwood was about to take a corner on the left but it was quickly forgotten as our nemesis of recent years, one Pierre-Emerick Aubameyang, was the one to rise at the near post and head home past Bernd Leno.

As much as I would have preferred not to have missed out on a trip there for our first Emirates victory, I was up, punching the air when the goal went in and was then left with that agonising wait for over twenty minutes before referee Graham Scott blew his final whistle.

With spectators in sections of the stadium, it was an unchanged Burnley team that strode out ahead of kick off; we had the same seven substitutes as last week too. Arsenal had reverted to their league team having made eleven changes for their Europa League game in Dublin against Dundalk.

Embed from Getty Images
I have to say that the name of Aubameyang on the opposition team sheet did worry me. He scored two goals in each of his first three games against us and apparently we are second only to Hamburg in terms of scoring goals against one club. And then there was Willian who always seemed to have the habit of playing well against us for Chelsea.

The game started as you might expect with Arsenal having most of the play but when the big first chance of the game came it fell to us and only Chris Wood will know how he didn’t put us in front. Robbie Brady played in a superb ball from the right hand side and the only defence for Wood failing with the header was him having his feet planted on the ground. It did prompt commentator Martyn Tyler, who at one point heaped praise on Burnley and Sean Dyche, to reference a left footed Irishman by the name of Brady who had once played for Arsenal. That’s Liam, of course, and he once put through his own goal playing against us.

Nick Pope made one really good save to deny Alexandre Lacazette and Rob Holding might have done better with a headed chance that went over the bar but, generally, despite Arsenal having more of the play, we did really well in the first half and I thought we deserved to go in level at half time.

It got tougher at the start of the second half. Arsenal had their best spell in the opening ten minutes or so and put us under some pressure. They got balls into our box from wide positions but we defended well with the reliable Pope behind them when needed.

Embed from Getty Images
We needed to get ourselves back into the game and Dyche decided to do something about it. He got Ashley Barnes ready but before the striker could get on it all kicked off on the pitch, prompted by a shocking and unnecessary challenge by Xhaka on Dwight McNeil. This bloke is a complete liability. Four seasons ago he was sent off against for a horrible two footed tackle on Steven Defour and, I have to say, this wasn’t good from him either.

McNeil was upset, rightly so, and he reacted. It all seemed to kick off before Xhaka decided to grab peacemaker Ashley Westwood by the throat. I am still stunned that referee Graham Scott didn’t get a card out for the challenge and even more so that he stood and watched the latter incident and only issued a yellow card. VAR official David Coote invited him to take a look at the pitch side monitor; there was only one conclusion then, Xhaka was gone, Arsenal were down to ten men.

There have been times when the opposition have been reduced to ten men when it has made little difference. I think back to that 2016/17 season when we saw Xhaka go and it made no real difference. Both Manchester clubs had players sent off against us that season with little effect.

This time I thought it did make a difference. We took advantage of them being a player short and although they continued to have plenty of the ball, we became far more effective going forward and I dared to start thinking we might even get a goal.

Embed from Getty Images
Hector Bellerín gave away a free kick out on our left hand side which was worthy of the yellow card it got him. The same player headed the ball out for a corner as the free kick came in. As Westwood was about to take the flag kick it all came to a stop with two players down injured, James Tarkowski and Mohamed Elneny.

I’d assumed they’d run into each other but no, Elneny had shoved two hands in Tarkowski’s face and then followed him down with a bit of play acting to try and put the officials off the scent. This time I have no criticism of Scott. It was clear and obvious that he would be given a second invitation to view the pitch side monitor and it was equally clear and obvious that Arsenal would be down to nine men. Incredibly, astonishingly, it didn’t happen. Quite what Coote was thinking I don’t know but the end result was Scott giving a yellow card for something he hadn’t seen. I didn’t think VAR could advise on yellow cards.

I was fuming as we finally got the all clear to take the corner, but not for long. Westwood’s delivery to the near post was perfect. Josh Brownhill rose high but it was Aubameyang who got his head to the ball to brilliantly direct his header past Leno and into the net. He might be struggling for goals this season but once again we saw just what a good finisher he is.

There was still a lot of work to do and the last few minutes were a difficult watch as Arsenal pushed men forward with little effect. I remember seeing the clock reach 89 minutes, hoping that stoppage time would be minimal, it wasn’t, it was five minutes.

Embed from Getty Images
They won a corner in the last of them which Brady cleared from close to the line. When it came back in, Brady was there again to head out and seconds later Scott blew his whistle for the last time and the points were ours.

This was special because of all that’s gone on in previous games against them. The hand ball goals, the penalties when players have been offside or not been fouled.

Much has been said of the fact that we hadn’t won at Arsenal since September 1974 but that was the last time we had beaten them in a league game home or away. In the home game later that season we were actually 1-0 up for four minutes; we’d not even been in front against them in a league game since.

It really was monkeys off backs time. Since Sean Dyche became our manager it now leaves just two teams we’ve played in league games but not beaten. We drew at Peterborough in his only game against them, and hopefully that’s a fixture that won’t be played again in a very long time. The only other club now is Sheffield United and we get the chance to put that right soon.

Embed from Getty Images
Everything in our garden isn’t rosy, that’s for sure. We might be out of the bottom three but only just and there is a long, long way to go. But I think we can all agree that the eight points we’ve picked up in the last five league games have given us all hope that, with our injury list shortening, things are on the mend.

I don’t often reference a man of the match in my reports but this was another game where I wouldn’t argue with anyone’s choice, I thought everyone all played well. But I did think Tarkowski was immense.

And so, that famous score of 1-0 to the Arsenal, highlighted during George Graham’s time at Arsenal, last night became 1-0 at the Arsenal.