A Stormy Start In Blackpool

The previous night was wild. A violent gale rampaged across the country causing 26 deaths and £100m worth of damage. Some gusts reached 80 mph. My wife and I were staying in Bristol. Throughout the night the wind buffeted the windows and growled in the grate while loose gates and shed doors groaned and slammed.

Holding the car on course was a struggle in the fierce gale. We arrived in Blackpool just before midday. With my eyes gritty with lack of sleep and concentrated driving, I left the car and took to the prom. There I stood, unsteadily braced against the rusted railings taking in the sea’s fury. The immense, foaming waves lurched in and out of the flitting sun, their frenzied charge urged on by an icy nor’ wester. Only the booming sea wall repelled them, their glinting hostages clawed back with seething resentment. 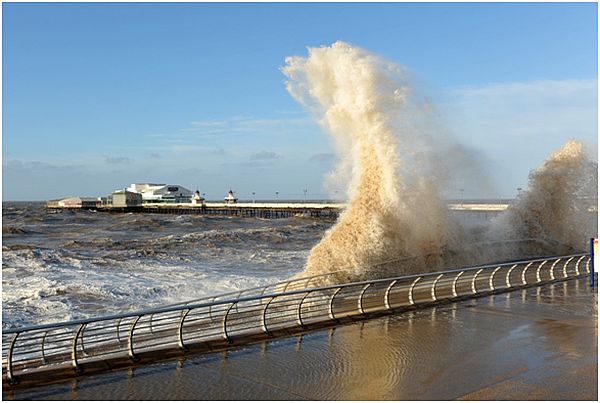 Wild weather normally stirred my torpor. But here I felt out of sorts. I returned to the car and slumped in the driver’s seat, staring dully through the saline-smeared windscreen. The wind was briefly refreshing but now my eyes smarted with salt as well as fatigue. My skin was tacky, and my hair tugged on the comb. My wife prescribed a pint and hotpot. She sensed a need of fortification for what we were about to receive.

As we approached the ground, snippets of ‘Bohemian Rhapsody’ were wafted erratically on the gusting, eddying wind. Chanting, too, was whisked above the roof tops in variable volume. I mistook this to be a celebration of ‘seaside air’ until twigging it was ‘Seasiders’!

I used to love the pre-match routine, particularly on smarting cold winter days, the chirpy chatter in cosy, smoke-filled pubs, the unsegregated banter, the put-downs, the grotesque caricatures, the surreal tales, and outrageous gossip. But on this stormy Saturday the pleasure stopped at foreplay.

Burnley’s esteemed former boss, Harry Potts, was in charge at Blackpool. He desperately needed a lucrative FA Cup run. With results, resources and crowds dwindling, his job was in peril. Besides, he had a score to settle with the current Burnley manager, Jimmy Adamson, whom he believed had usurped him at his beloved Turf Moor.

With so much at stake and both teams in wretched form, this was never going to be a fluent contest. In fact, it was truly grim. The players had huge difficulties contending with the swirling wind, which howled ghoulishly under the rusted corrugated roof, tugging at the flapping club flag. Long lumps were a hostage to fortune. Ball control was an embarrassment. Chances were fewer than hardy beach boys. Before the floodlights eclipsed the fading day, the sky began to clear. Only torn tufts of cloud remained, fleeing from the north-west approaches, their crimson reflections of a raw sunset lost on the anxious crowd.

Just as we were settling for an ugly 0-0 draw, Burnley’s game fell apart. Hankin, their only striker of substance, was dismissed. Shortly afterwards, Blackpool’s defender, Bill Bentley, thumped in a free header from a corner. We bowed our heads as the home fans leapt around us. With Waldron’s late equaliser ruled out, there was no way back.

Harry Potts was understandably jubilant. He dismissed the reporters’ comments that it had been a petulant game littered with niggling fouls and reckless challenges. His club was £4,500 better off and he had put one over his former rival. A disconsolate Jimmy Adamson lamented ‘We seemed to be playing uphill. ‘Everything keeps going against us.’ The Burnley Express reporter’s verdict was less forgiving: ‘Scraping the Barrel’ he wrote.

It was a lugubrious journey home. My wife drove. We hardly spoke. The branches of the overhanging trees still thrashed wildly in the stiff wind their fallen leaves whipped up by the passing traffic. Outside, there was irrepressible energy but inside we felt flat and empty.

Little did we know that a bitter dressing room row was taking place. Adamson returned from his contretemps with the referee to find the door locked. It was an undignified affair. Two days later, Bob Lord requested Adamson’s resignation. Burnley were sunk.

Mike Garlick, the current Burnley chairman, saw the Clarets in action for the first time on this day, having been inspired to follow them by Rev. David Wiseman’s talk at his school. Long-standing London Claret, Danny West was also there. He recalled in a later article, ‘I travelled to Blackpool with Simon Pettit and Henry Lumley. The train was two hours late due to the weather. Blackpool was cold and desolate.’ But Danny was not deterred. He was soon back on the train to see Burnley lose 3-1 at Norwich in another dire performance.

Going home from Carrow Road he said: ‘All I wanted to do was have a quiet sulk in the corner with a few people who felt the same. But Greg Peck had abounding enthusiasm. He wandered up the train and found another four or five Burnley fans. A week later he rang me to say that a few Aston Villa fans would like to go to Turf Moor but could not raise the numbers, could we help? I rang some Burnley fans which gave me six travellers. I think we had eight, three for Villa and five London-based Burnley supporters whom I think were Henry Lumley, Simon Pettit, Micky Bullen, Nigel Blackburn, beside me. The man at British Rail, Euston said I would have to sign a contract for group travel. I was in a good mood after watching Burnley beat relegation rivals, Sheffield United, in a midweek game, so I signed. But on the way home from the Villa game I read the document I had signed and almost died. It seemed as if I was personally responsible for any damage incurred. Thankfully, all went well. So, Saturday 28 February 1976 is my date for the birth of our supporters’ club.