An End of Innocence

Tim Quelch has taken to writing again and his latest book An End of Innocence is set to be published next Monday, 22nd February.

In this book Tim examines the radical changes that took place in English football after the watershed 1959/60 season. He looks particularly at the impact made by the abolition of the maximum wage and the ending of the feudal ‘retain and transfer’ system which initiated a crucial shift in the balance of power between top players and their clubs.

Jimmy Greaves believed that the 1959/60 season, which concluded with Burnley as champions of England, marked an ‘end of innocence’, when English football ceased to be played in an open, attacking style, as more defensive tactics took hold. 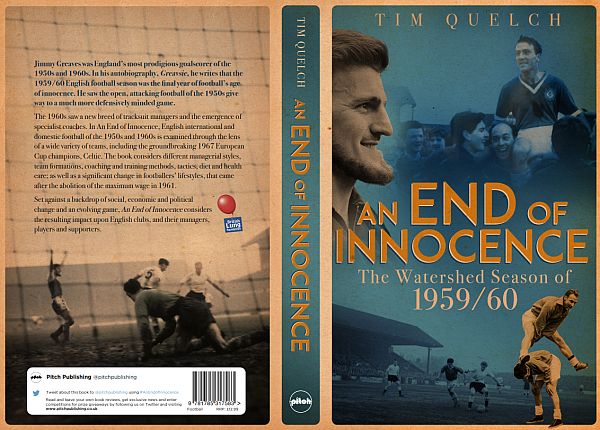 However, were the 40s and 50s really a golden age of English football or was this period more one of implacable complacency and insularity, contributing to the post war decline of the England team? Certainly, it seemed that the English game was then administered in a myopic, nepotistic, anachronistic, and shambolic way, mirroring perhaps some of the causes of Britain’s post war industrial decline.

Yet the 50s also saw the emergence of some of our leading coaches. Among these was Burnley’s Alan Brown, arguably the architect of our club’s 1959/60 triumph. His bewildering array of dead ball ruses, originally devised for a small forward line, were absorbed and developed by 59/60 heroes, Jimmy Adamson and Jimmy McIlroy. These tactics were also passed on by Brown, when at Sunderland,  to a struggling young manager named Brian Clough, who in turn influenced a strapping, ginger-headed apprentice centre half, at Nottingham Forest. In time, that centre half would successfully replenish Burnley’s armoury of set plays around sixty years after Alan Brown had initiated them.

‘An End of Innocence’ covers Burnley’s rise in the 50s and its subsequent decline in the early 70s when the relegated Clarets joined their local rivals, Bolton, Blackburn, and Preston, in the second tier, where their declining football fortunes reflected their ebbing textile trade.

But while this book contains substantial Burnley material its scope is wider. In Part Two Tim looks at the 1959/60 season in detail but equal space is given to Burnley’s rivals with a selection of remarkable games played during that season, culminating in the amazing Real Madrid masterclass at Hampden Park in May 1960. This was football for the jet age in our time of steam.

He looks also at English international football in the 50s and 60s, examining the erratic progress of the England team prior to its World Cup triumph in 1966, showing how Alf Ramsey took on a dysfunctional FA and turned an often misfiring England side into World beaters. Similar disciplines were employed in converting English club teams into European beaters, encouraged by Celtic’s ground-breaking success in 1967.

Professor Ian Taylor, a sociologist, suggested that the abolition of the maximum wage in 1961 contributed to a re-emergence of football hooliganism. He hypothesised that hooliganism represented a working class backlash against ‘jet setting’ top players who were allegedly castigated by their fans for abandoning their roots. The book considers the youth movements in the 50s and 60s, such as the Teddy Boys, Mods, Rockers and Skinheads and assesses their impact on growing disorder at or outside English football grounds during these times and considers their motives.

The great movers and shakers of the 50s & 60s are profiled including Busby, Cullis,  Nicholson, Catterick, Brown, Buckingham, Mitten, Greenwood, Mercer, Revie, and Shankly in order to established how they contributed to an evolving game.

Just as the 50s were perhaps not the Shangri-La years Jimmy Greaves envisaged, the 60s were perhaps wrongly criticised by him as a time of defensive sterility. As in the book’s recollection of English football in the 50s there is a selection of games played in the 60s, involving teams at different levels in the Football League, the purpose being to see whether English football in the 60s seemed inferior in entertainment value or excitement to that played in the 50s as Jimmy alleged.

The outstanding feats of several giant killers are considered too because the element of surprise is always crucial to the success of football. The 50s saw Port Vale, York City and Norwich City reach the FA Cup semi-finals. The book covers their remarkable Cup runs. As for the 60s the outstanding  giant killers were third tier Swindon who had the temerity to beat us before triumphing at Wembley against Arsenal in the League Cup Final of 1968/69.

An extensive cast of managers and players, including several from Burnley, have contributed their views about their sporting lives and tactics during the 50s and 60s to provide a first hand impression of how the game was prepared for and played in those now distant times, inviting comparisons not only between the 50s & 60s but with football now.

The book includes an impressive collection of evocative black & white photographs, many of which are action shots.

Tim will donate all of the proceeds from sales to the British Lung Foundation in memory of two friends who died two years ago of incurable lung diseases. He said: “At this time of Covid it seems an appropriate cause to support.”

The book can be purchased at the Burnley club shop, Pitch Publishing, Amazon, Waterstones & WH Smith from February 22nd, although advance orders are available. Its current price on Amazon is £10.19.