Back to the football and a trip to The Hawthorns 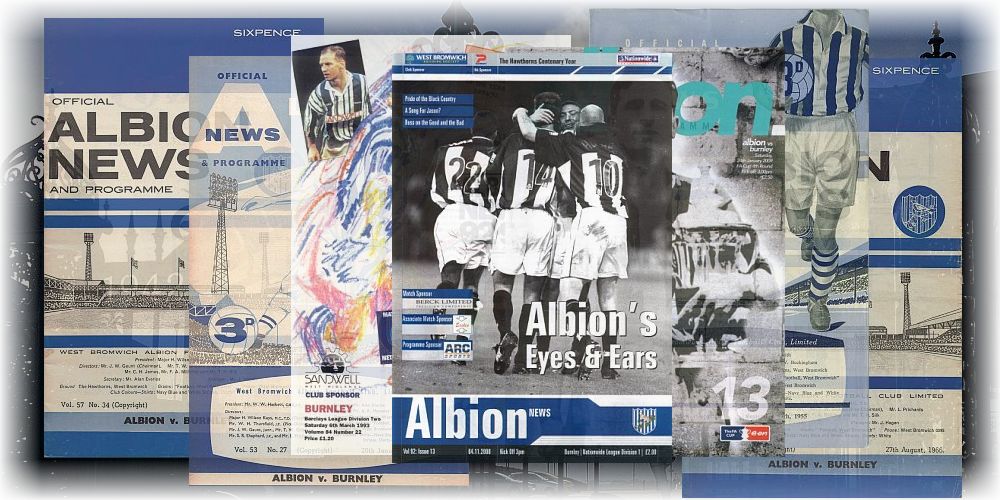 Yesterday was a busy day as four players came in to the club and three went out, some loans and some permanent, but now, tonight, we can get back to doing the day job of playing football.

The last time we played at West Brom, we won our first point of the 2020/21 season from a 0-0 draw but the last time supporters were able to attend this fixture it was one we won 2-1 with goals from Ashley Barnes, a spectacular overhead kick, and Chris Wood, right in front of us.

It will be the first time we’ve met at this level since the 2007/08 season. James O’Connor gave us a very early lead but we were beaten 2-0 with Bostjan Cesar and Roman Bednar scoring for West Brom on the day we gave debuts as substitutes to both Andrew Cole and Mark Randall.

My first two visits to West Brom both ended in 2-1 wins. In the 1965/66 season we came from behind to win with goals from Alex Elder and Gordon Harris and in the following season Brian O’Neil scored twice in our first away game of the season.

That’s probably why I like going to The Hawthorns but I’m not sure why. A season later I was there to see us concede eight goals, the only time I have seen us concede so many in one game, and I’ve witnessed two 4-0 defeats there in the Premier League.

We go there this time on the back of three league and cup wins. The victory at Shrewsbury ten days ago was definitely nothing to write home about but we followed that up with a brilliant showing at Wigan and a very good performance back at the Turf against Millwall. West Brom might be a tougher nut to crack than those three but we will very definitely be going there with confidence.

We go there in third place in the table, although after so few games not too much can be read into that other than us having made a good start. One of our players in particular is looking forward to playing there tonight. He might be one of own, a player who had less hair than me when I first saw him play for the Clarets, but Jay Rodriguez also had two seasons at West Brom. The first saw them relegated from the Premier League but in the second they were close to returning with Jay netting 22 league goals.

Embed from Getty Images
Ahead of tonight’s game, he said: “This past week it’s been two good performances against tough teams. Against Millwall, we managed to play our game and break them down eventually. It was satisfying.”

He clearly enjoyed himself during his two years at West Brom and added: “It’s a special place for me and my family. I met some great people there, made friends for life; I enjoyed my time there.”

Jay’s been in form recently in front of goal. I recall him scoring his 99th league goal at Crystal Palace and then having to wait almost a year for him to hit hundred with his goal earlier this year against Manchester United. He’s now hit three this season and I’m sure there are many more to come.

He should be in the starting eleven tonight but what will the team be? I would think there is every chance of it being the same team provided Arijanet Muric is passed fit. We do have Ian Maatsen available again after he completed his suspension last Tuesday but it would be harsh on Vitinho if he were left out after his performances at left-back.

There have been three new signings since last Saturday’s win at Wigan. I suspect Anass Zaroury could be involved but it is probably too early for yesterday’s loan signings Halil Dervişoğlu and Jordan Beyer to be considered.

West Brom have also had a busy week as the transfer window drew to a close. Earlier in the week they signed the much sought after Brandon Thomas-Asante from Salford and yesterday added Martin Kelly from Crystal Palace although it is the signings earlier in the window of John Swift (Reading) and Jed Wallace (Millwall, pictured above) who are likely to be their key players.

Embed from Getty Images
Like us, they’ve only lost once this season and that, given it was at Ewood Park, was one we wanted them to win. They’ve won just the once too, beating Hull 5-2 in their last home game. The five other games have all ended in draws, two at home against Watford and Cardiff, and three on the road at Middlesbrough, Huddersfield and Wigan.

They’ve scored ten goals in those games, with Karlan Grant leading the way with three, followed by Swift and Wallace who have both scored twice.

West Brom currently sit 14th in the table with eight points but are one of the teams tipped to do well this season.

Reports suggest that West Brom will be without defender Semi Ajayi, who was forced off with an injury in their last game, and Daryl Dike who is out with a thigh injury.