Despite suggesting he wouldn’t be fit to play in any of the pre-season games in Northern Ireland, new manager Chris Waddle was in the line-up when we played our second game against Linfield.

He’d promised to give all the players an opportunity to stake a claim and there were six changes from the team that had drawn with Crusaders. Besides Waddle, all of Chris Woods, Damian Matthew, Paul Weller, Marco Gentile and young defender Gareth West started. 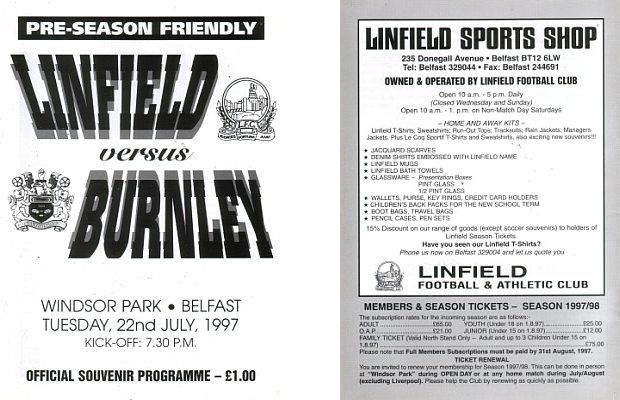 Linfield started the game well but Burnley were coming back into it, that was until the home side went in front half way through the first half. In torrential rain, when Linfield’s Paul MILLAR was played in by Eddie Hill, he got past West and his looping shot found the net despite Woods getting a touch to it.

Woods didn’t stay on much longer. Hampered with an Achilles injury, Marlon Beresford replaced him just after the half hour, and the replacement keeper was extremely fortunate not to concede almost immediately with Millar again coming close.

Being polite, Linfield were getting in some tough challenges and once we got to grips with that in the second half then the game changed. We thought we were level right at the start of the second half. Waddle played the ball to David Eyres with Paul Barnes converting the cross from Eyres, only to be wrongly ruled offside.

The pass from the manager had fans in raptures and Chris Boden, covering the game for the Burnley Express, wrote: “The new boss showed one or two touches that oozed class. One ball to Eyres, with the outside of his foot will wreak havoc in the Second Division this season.”

Finally, we drew level just past the hour. Mark Ford, again in top form, made a terrific run down the right and played a one-two with Barnes before the striker set up Waddle. His shot was deflected straight back to BARNES to score from close range.

It was all Burnley now and the winner came with thirteen minutes remaining. Again Ford was the architect with a run down the right. This time he crossed for BARNES to head home his second of the game.

Linfield had one more opportunity and it fell to Barker who saw Beresford make a stunning point-blank save to ensure victory.

Waddle said after the game: “We treated the first half as a friendly and I was a bit disappointed with what we offered. As a team in general we didn’t compete to the standards I expect. But in the second half new were a different side. We chased and harried and fought for everything.

“The important thing was that we didn’t ease up in the second half. We certainly looked a better outfit after the half time team talk. The three lads in midfield – Mark Ford, Paul Weller and Damian Matthew – did not put themselves about enough in the way you would expect, but after half time we saw three different players.”

He had words too for his two debutants at the back and said: “Marco Gentile got better and better as the game wore on and looked a very strong footballer. Gareth West also did well in his first game. He got caught out a little bit for the goal, but he should be very pleased with is overall performance.”