Having drawn the FA Cup third round tie 0-0 at Turf Moor, Burnley travelled to Anfield three days later but exited the FA Cup after losing the replay 3-0 against First Division league leaders Liverpool. 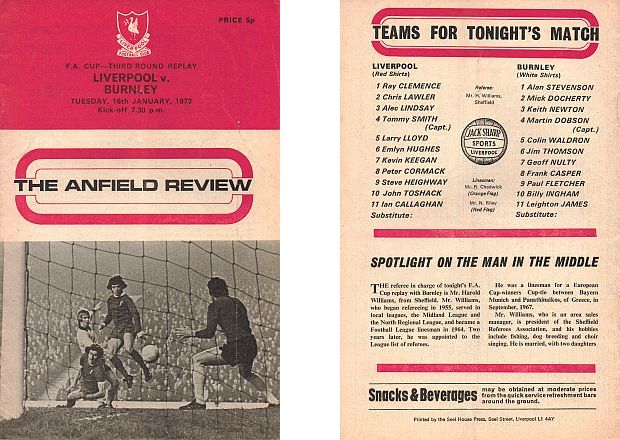 It was purely co-incidence that we played Liverpool in the very week that former leader of the Burnley Labour Party, ex-Alderman Mr John Cassidy, who had been expelled from the party in 1966, failed in an attempt to regain his membership. There was no link with Liverpool Football Club and Mr Cassidy but there certainly was with him and their City. Back in 1962, when the Clarets had been drawn at home to Everton on route to Wembley, Cassidy claimed that people in Burnley were frightened to death of their hooligans and said genuine supporters wanted to lose a replay against Leyton Orient to avoid facing them. Although nothing official had been announced by the party, the Burnley Express’s Bert Bolton said he could reveal that the former leader, who had caused all kinds of problems during his time on the council, had been refused permission to return to the party. Cassidy had received his expulsion for causing continued disruption within the party, and came nine months after a three year ban had been served.

Burnley was going to have a green 1973 with the biggest planting of trees in the history of the town. The Parks Department had taken it upon themselves to plant a total of 5,500 within three months plus a further 2,000 conifers. The Deputy Director of Parks, Mr Michael Woodhead said: “This is definitely the largest programme of tree planting we have undertaken and we aim to get as many in as possible by the end of March.” The biggest area to benefit was Healey Heights where 1,750 of the trees would be planted.

There was some good news for the Mayor, Councillor Abel Bridge. He’d been suffering from a chill and had received letters of sympathy with wishes for a quick return to health. He hadn’t fulfilled any engagements since Christmas Day but had declared himself fit to resume.

The manager of the Wonderland Bingo Hall might not have had a full house but he at least had the front door. The problem was, he admitted stealing the door when he came up in front of the magistrates. The door, valued at £10, was the property of William Leach Ltd. who were building in Habergham Eaves. A door was found missing from one of the partially completed houses in Green Close. He admitted in court that he’d taken it, and said he’d fitted it to a porch he’d built at the front of his own house. Mr Basil Dearing (defending) said the man could afford the door and didn’t know why he’d taken it. The court invited him to pay to the value of three and a half doors, fining him £25 with £10 costs.

Away from the courts, our Member of Parliament, Mr Dan Jones, was telling an anti-abortion meeting at Preston Guild Hall that the price of sexual freedom, in what he claimed was a hideous, permissive society, was an epidemic of venereal diseases. Jones had recently called for the closing of all shops selling anything pornographic and was now speaking out very strongly against abortion and said: “I am appalled that young girls and women should allow their bodies to be subjected to such a degrading instrumentation.”

Anyway, for many Burnley folk it was time to go to Anfield. I’d had a busy weekend taking in Blackpool for my 21st and then going to the Turf for the first game before returning to Sheffield for my penultimate term at university. Having just got back there it was time to plan my trip to Liverpool. I had a brainwave. Back in the 1970s any FA Cup tie that went to a replay would always have the same referee and that was Harold Williams from – yes, Sheffield. So, I got hold of the local referees’ society who gave me his home number. I phoned him and asked if he could give me a lift. What a nice man he was. He said he might have a space in his car but wouldn’t know until Tuesday afternoon. I thanked him but declined to wait; I didn’t want to be rushing round at the last minute so it had to be the train and I arrived in good time.

I got there to learn that Jimmy Adamson had immediately restored Doug Collins to the team after serving a two match ban with Billy Ingham returning to the bench but, unfortunately, I saw us go out of the cup on a night when Liverpool scored three times with no reply although that scoreline just doesn’t give credit to the Burnley performance and, in particular, that of goalkeeper Alan Stevenson. “Forget the score, this was another triumph for the brave batting men of Burnley. They may have lost a cup tie but they have gained the respect and admiration of the football world,” wrote Peter Higgs of the Burnley Express.

It wasn’t all about defending. We certainly had our moments but Shankly’s Liverpool were an irresistible force at times and came forward in waves. The Cormack save came on the half hour and maybe then we thought we’d weathered the storm, but six minutes later we fell behind with a goal that really should have been prevented. Colin Waldron went to cover a right wing corner from Cormack but he missed the ball and John TOSHACK headed home from six yards.

It really spurred us on and twice we came close to drawing level before half time. A Leighton James cross was turned towards goal by Martin Dobson. His shot beat Ray Clemence but Cormack got back to clear off the line. Moments later and this time a cross from Doug Collins saw Paul Fletcher turn a shot inches wide of the post. If either had gone in then we’d have had a great chance, but four minutes into the second half Liverpool doubled their lead in controversial circumstances. A harsh free kick was awarded against James for a challenge on Tommy Smith. Cormack took the free kick and chipped it over the wall. Kevin Keegan headed it on for TOSHACK to deflect it wide of Stevenson. The linesman’s flag went up immediately to signify handball by Toshack but Williams gave the goal. Surrounded by Burnley players, he went to speak to the linesman but would not change his mind and the score was 2-0. Toshack said after the game: “The ball came off my hand and I was surprised the goal was given.”

I was far from happy and, believe you me, Williams would not have been happy if I’d have had my opportunity to give him my opinion on the way back to Sheffield. Even so, the game was still far from over and Burnley turned in a brilliant spell to try and get a foothold back in the game. Clemence showed his class with saves from James and Frank Casper, Dobson fired just wide and then forced Clemence into a top save before the England goalkeeper did even better to deny Fletcher with a downward header.

We could have been right back into it, and deserved to be, but with a quarter of an hour remaining Liverpool got a third. Steve Heighway crossed for Toshack. This time he headed the ball down for CORMACK to steer it home. It was all over now and Stevenson was forced into making three more good saves to keep the score down in the closing period.

We were waving goodbye to the FA Cup for another year but the thousands of Burnley fans who made the trip to Merseyside gave their team a rousing reception at the end. Over the two games we’d given Liverpool a much tougher tie than they could have imagined. The scoreline in this replay hardly reflected the performance we’d given.

It was time to concentrate on the league for Burnley and we now awaited the visit of Portsmouth four days later as we sat with a four point lead at the top of the table with seventeen games still to play.