Burnley through to last four in Autoglass

A home win against Huddersfield Town took Burnley into the Northern Final of the Autoglass Trophy in 1992 and with it a two legged tie against Stockport County to come.

Accidents at the junction of Manchester Road and Hargreaves Street in Burnley, brought about by the work for the pedestrianisation of parts of the town centre, were becoming almost a daily occurrence and there had been yet another accident of note. 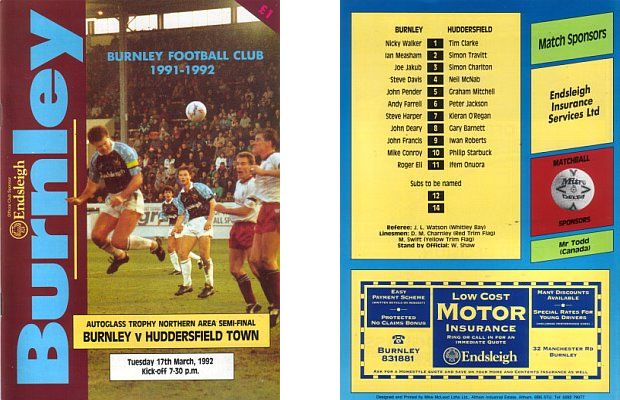 This one was the worst of the lot with fifteen schoolchildren injured when an articulated lorry ploughed into a bus. It left many of the children screaming as they were thrown across seats. Eight of the injured were taken to hospital with some of them undergoing treatment for hours.

This had been the sixth crash at the junction involving a bus and the council jumped into action with a spokesman saying they would look into any dangers once any reports had been studied.

My mum was in a panic as rumours spread that Marks & Spencer were to close their doors in Burnley. She judged the quality of a town on its ‘Marks’ and I’m not sure how she’d have coped had the store disappeared. There was good news for her and others from David Bohm, manager of M&S in Burnley, who said: “The store is trading very successfully and there is no foundation to the rumours circulating the town that it is about to close. Marks and Spencer is very committed to Burnley both now and in the future.”

There were problems on the buses with drivers rejecting a 5% pay offer from their bosses. But they received a warning from managing director Mr William Jelpke who told them that the company was losing passengers and he urged them to take the offer ahead of the latest round of tendering in Lancashire.

We’ve reported over recent months on the sad death of 66-year-old Frank Ashcroft of Ribchester Avenue that led to Mr Michael Shackleton (25) appearing in court. The court was told that it started with a fight between their dogs, Mr Ashcroft’s Yorkshire Terrier and Mr Shackleton’s Rottweiler.

It was alleged that Mr Ashcroft hit the Rottweiler with his walking stick and was then struck by Shackleton which saw his fall to the ground, fracturing his skull. He died eleven days later. Mr Shackleton. Mr Justice Eastham told the accused that the assault had been gratuitous and unprovoked. He sent him to prison for eighteen months.

Police were searching for a man who had exposed himself to two young girls and then chased them with an iron bar. Witnesses were sought with people told to look out for a man of less than average build. He was wearing a red ski mask at the time and dark upper body clothing.

There was worse, another man aged 63, was in court after admitting to indecently assaulting two girls who had gone to his house to play. Judge Anthony Jolly told him: “You have had a good character for 63 years and now you have lost it. Fortunately the assaults weren’t as serious as many that come before the court, but I must impose a sentence.” That sentence was no more than eight months suspended for two years although he was told that he would go to prison should there be any repeat of the offence.

When I was a kid there was a lady on our street who, on occasions, didn’t seem to be able to cope with us playing football outside on the cobbles. How things had changed. When a sign went up in Ridge Avenue prohibiting the playing of ball games, residents demanded that it be removed to allow the children to play. No less than 44 residents had signed a petition but a counter petition supporting the ban had reached twenty signatures. It turned out that the sign had been placed on the gable end of one resident’s home after he’d spent thirteen years trying to stop the games, so just like it was on our street years earlier.

Seven young men were fined £500 each after a brawl outside McDonalds in St. James’ Street and Judge Ian Webster warned that they had come close to prison sentences. They’d started by abusing a passer by and throwing objects at him but then took it further by beating and kicking him and his two friends although their defence suggested the man attacked had started it in the Swan pub earlier in the evening. Judge Webster told them that they would all need to make their first payments on 1st April. He told them: “April 1st is All Fools’ Day and you are all fools for getting yourselves involved in this situation.”

Onto the football and Burnley fans were thanked and congratulated for raising £2,000 for Aldershot at a collection prior to the home game against Barnet. It was the most raised at any ground but would it be sufficient to keep them in business? Reports were surfacing that the club was on the brink with a key meeting to be held in the following week.

More often than not, you didn’t need to purchase a ticket in advance of an away game but the club, at somewhat short notice, confirmed that tickets would be required for the game at Mansfield four days later. Stand tickets were priced at £7 with terrace tickets at £5. There were no concession prices. We’d been allocated 2,500 with warnings that no Burnley fan without a ticket would be admitted.

It was Autoglass Trophy night with Huddersfield our visitors. Manager Jimmy Mullen said: “It is important that we keep the winning habit alive. We know that it won’t be an easy game, but if we hit top form we also know that we can cause them a lot of problems.”

Burnley booked their place in the Northern Final of the Autoglass Trophy with a 2-0 win against Third Division Huddersfield at home on a night when the referee John Watson took centre stage with a bizarre performance that including the sending off of John Deary.

The Burnley Express reported that he’d had a night catalogued with shocking decisions and highlighted three. Huddersfield’s Iwan Roberts was yellow carded for elbowing Mark Monington but then not even spoken to following an even worse elbowing incident involving goalkeeper Nicky Walker.

Graham Lancashire burst through but was hauled down by Graham Mitchell. The Huddersfield player set off for the tunnel assuming the only decision could be a red card only for Watson to give nothing other than a free kick.

That incident was ten minutes into the second half and a minute later the red card did come out, and it was for Deary. He’d rightly been carded in the first half but no one was quite sure what the second yellow was for and Deary himself looked bemused. After the game, Jimmy Mullen described it as the strangest sending off he’d ever seen.

It didn’t stop the Clarets though and we’d won the game with two goals before the red card with Deary involved in the first. His corner was headed by Monington but a Huddersfield player handled the ball for the clearest of penalties that even this referee gave. Up stepped Mike CONROY to convert expertly past Tim Clarke, the Huddersfield goalkeeper.

Both Steve Harper and Roger Eli had opportunities to double the lead with neither chance taken, but when ELI had another chance he made no mistake.

A 2-0 lead at half time and, despite playing much of the second half with ten men, it was a lead we never looked likely to relinquish and but for misses from Lancashire and Eli in the second half we were comfortable winners and we learned that it would be Stockport next with them having won 2-1 at Crewe.