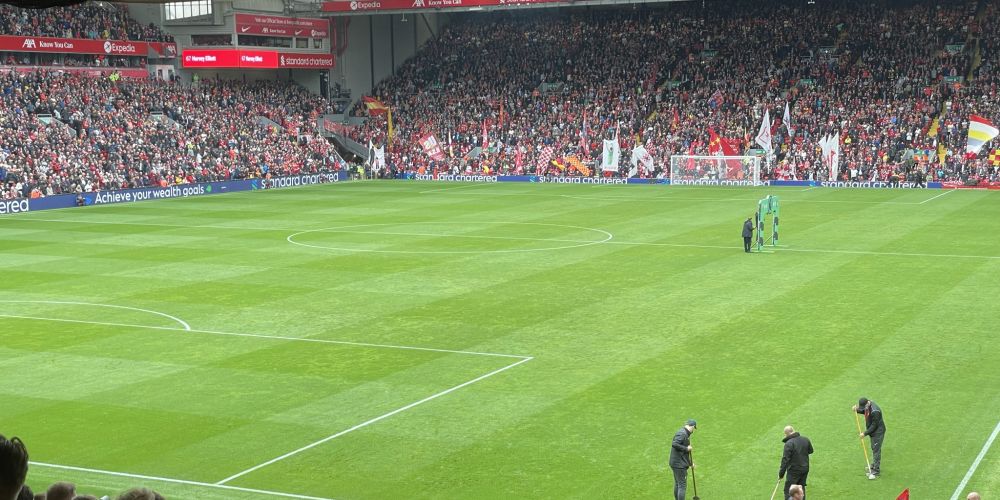 Four points from two games behind closed doors at Liverpool, but we couldn’t add to that yesterday as the fans returned to Anfield and we fell to a 2-0 defeat with the home side scoring one goal in each half.

On what was an emotional day for the home club, as they paid tribute to Andrew Devine, the 97th victim of the Hillsborough disaster, who passed away last month as a result of the life changing injuries he received that day in 1989, it was billed as their big day with the fans returning.

I’m not used to travelling around the country now, the last time I left Burnley was back in March 2020 when I went to Manchester City to see our under-18s play in the FA Youth Cup quarter-final. I was undecided whether to go or not, but much has happened in the last few weeks that I decided, somewhat nervously, to make the trip.

It was via the X43 to Manchester and train from there to Liverpool Lime Street where I saw, for the first time, the Ken Dodd and Bessie Braddock statues. I suspect most know of Ken Dodd, it would be hard not to of this brilliant comedian, but I think you must be of a certain age to recall Bessie, the larger than life and outspoken Labour MP for Liverpool Exchange between 1945 and 1970 who once reportedly accused Sir Winston Churchill of being drunk. He, again reportedly, replied: “My dear you are ugly, but tomorrow I shall be sober and you will still be ugly.”

Embed from Getty Images
The final part of the journey was by bus to Anfield with a visit to the home fans at the Fans Supporting Foodbanks van before going into the Anfield Road end just as we learned there was no Ashley Westwood or Matěj Vydra in the squad through injuries. Josh Brownhill was in for Westwood, who was missing for the first time since our game at Spurs in December 2019, while Ashley Barnes was preferred to Jay Rodriguez. Such was the shortage of players again that we had two goalkeepers on the bench, as did Liverpool, with Owen Dodgson, signed during last season from Manchester United, joining the subs for the first time.

“Where’s your famous atmosphere?” the Burnley fans were singing. Sean Dyche described it as electric. The minute’s applause was impeccably observed, and once Liverpool captain Jordan Henderson had laid a wreath in front of the Kop, we were ready to go.

I was a bit disappointed Henderson was playing to be honest. I think he’s often the player who makes Liverpool tick but there he was, lining up for the first time in a Liverpool shirt since February when he suffered an injury in their home defeat against Everton. With Joël Matip and Virgil van Dijk back in the centre of their defence, this looked a very strong Liverpool team.

If everything was stacked against us, you wouldn’t have known for much of the first half. We took the game to them and caused them problems. Referee Mike Dean, much to the dislike of the whinging Klopp, allowed fair tackles. Some will suggest we might have had a penalty, but not for me and just moments later we went behind.

Embed from Getty Images
I’m not suggesting Liverpool hadn’t been a threat at all, but I don’t think anyone could have argued had we been in front with much of our threat coming from Dwight McNeil who seems to revel coming up against Trent Alexander-Arnold.

With so much play down that side, the Burnley fans more than once spotted Andrew Robertson, on his way back from injury, warming up and reminded him of Scotland’s poor international form. Robertson responded with a few smiles as Phil Bardsley, himself a Scotland international, joined in with the fun.

Back on the pitch, Alisson made a couple of good saves and twice came out of his box to clear balls when we threatened danger. McNeil hit the post, but I hadn’t spotted the offside flag go up that would have ruled him out.

Liverpool broke from that penalty appeal, and it led to Diogo Jota heading home a Kostas Tsimikas cross. It was a great cross from Tsimikas, who played against Burnley for Olympiacos, and superb movement from Jota to get in front of Ben Mee to score.

Embed from Getty Images
It might have been two; this time Stockley Park spared us with a tight offside against Mo Salah but I really do think we could be pleased with our first half performance that, on another day, would have seen us go in at half time level.

Sometimes you need things to go your way and from the Anfield Road end it seemed, albeit fleetingly, that they had at the start of the second half when Matt Lowton crossed for Barnes to fire home. Barnes has scored twice previously at Anfield, but this wasn’t to be number three. Assistant Darren Cann raised his flag for offside; it didn’t need VAR, it wasn’t even close.

It had the reverse effect unfortunately and Liverpool went into their best period of the whole game, but we defended well and kept ourselves in it until just over twenty minutes from the end when Sadio Mané doubled their advantage, finishing expertly when played in by Trent Alexander-Arnold.

You do start to fear the worst. You hope there wouldn’t be too much more damage and there wasn’t. We did well and right at the end, in the last minute of stoppage time, they again relied on Alisson to keep a clean sheet when he made a good save to deny Barnes.

Embed from Getty Images
But, a defeat, a second in two games this season to add to that disappointing end to last season. You can’t go gushing with praise when reporting a loss, but I do think there are positives to take from this performance. We will play far worse than this and win, of that I’m sure.

There was one huge positive worth shouting from the rooftops. Despite Klopp and his rather strange suggestions about the way we play, dismissed immediately by Peter Crouch and Joe Cole on the BT Sport coverage, followed by the Match of the Day pundits, we have, I believe, now recorded a Premier League record having not had a single player sent off in our last 95 league games.

And, although not a first, it is a long time since we kicked off a game with shirt numbers 1 to 11 on the pitch, potentially for the first time since we first used squad numbers in 1999. In the Premier League, other than when Manchester United and West Brom have worn commemorative shirts, it I the first time since Charlton did likewise in 1998, reportedly also against Liverpool at Anfield.

As for our return journey, it all went quite smoothly other than the decision to walk back to Lime Street from Anfield. It proved a little too much for my ageing legs and feet.

Next up in the league is Leeds at home. We need to get moving sooner rather than later and, who knows, there might even be a signing or two by then.